Difference between revisions of "Thomas Lombe" 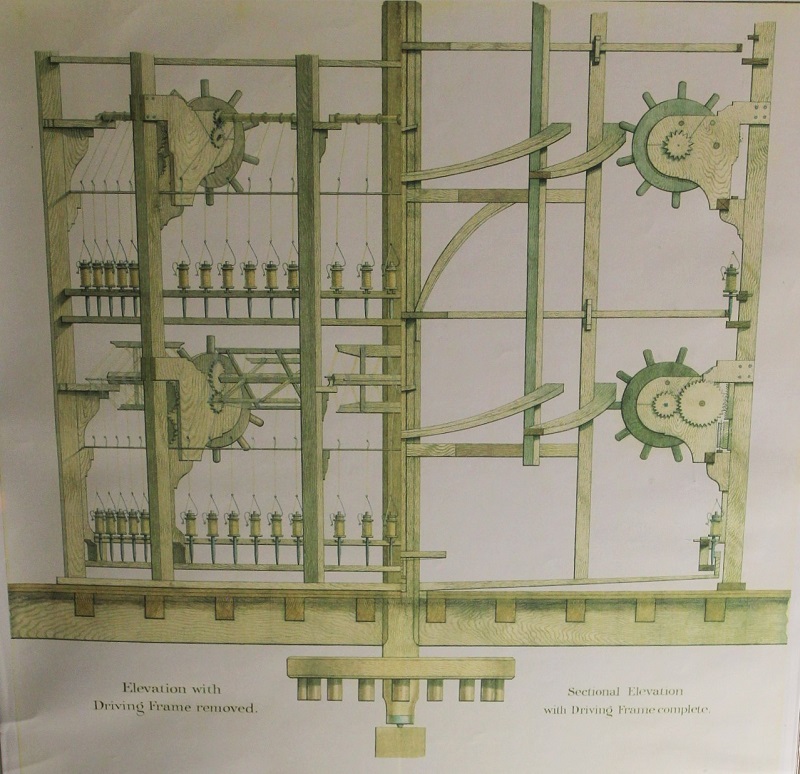 Copy of a drawing, from a lost original, of Thomas Lombe's silk-throwing machinery, on display at the London Science Museum, 2016 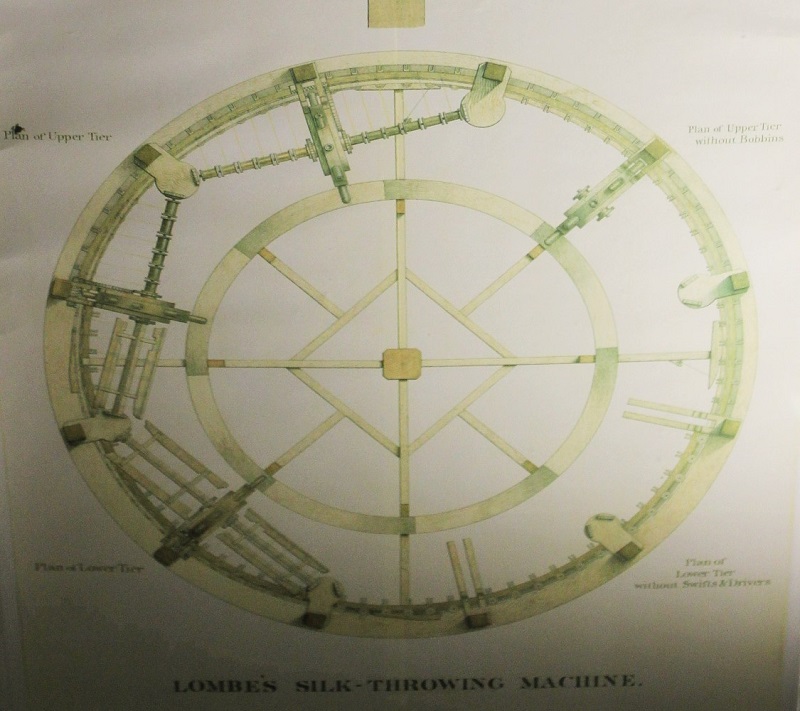 c.1695 His father died - Thomas and his brother Henry were left in the care of the executors, whilst John was brought up by his mother, Henry Lombe's second wife.

1700 Lombe went to London, where he was apprenticed to Samuel Totton, mercer[3]

1707 He was admitted to the Mercers' Company. In the same year he became a freeman of the City of London, and he eventually established himself as a merchant.

1715 Thomas, John and their cousin William began to construct a mill on an island in the River Derwent at Derby, adjacent to an unsuccessful silk mill built earlier by Thomas Cotchett, a local attorney. Thomas is thought to have sent John to Italy to learn about the processes for silk throwing.

c.1717 John returned from Italy, bringing with him at least two Italians to assist him in starting the new factory. The machinery for silk-throwing was very complex for its time.

1718 Thomas obtained a patent (no. 422) for "a new invention of three sorts of engines never before made or used in Great Britain, one to winde the finest raw silk, another to spin, and the other to twist the finest Italian raw silk into organzine in great perfection, which was never before done in this country."

The Lombes can be said to have introduced into Britain the basic machinery and the factory method of working, long-established in Italy (although as early as 1692 a number of men had unsuccessfully petitioned for leave to be incorporated into a company for the purpose of introducing the Italian machinery and starting a manufactory in Britain). Later the machines were adapted to other types of yarn and were to be of inestimable value to the silk and ultimately the textile industry as a whole.

1719 Thomas, John and William began production at their mill (although initially they may have had to do the silk-throwing in other premises in Derby). Eventually the mill became a prosperous concern.

1727 Having been an alderman of Bassishaw ward in the City of London, Thomas was elected as sheriff and was knighted.

1732 Thomas's patent expired but he petitioned Parliament for an extension, alleging that he had been put to great expense in training workmen, and that the Sardinian authorities had prohibited the importation of raw silk, so that a supply had to be obtained elsewhere. There was considerable opposition to the petition from the cotton and worsted spinners, who were keen to use a modified form of Lombe's machinery for making yarn, but who had been prevented by threats of legal action for infringement. Parliament rejected the case (the first time that anyone had petitioned for an extension of a patent). Eventually an act was passed granting Thomas a reward of £14,000 on condition that he deposit models of his machinery in some public institution. Models were ultimately placed in the Tower; a few surviving fragments were later said to be in the Victoria and Albert Museum. A one-third scale model of the machinery was deposited in the Silk Museum, Macclesfield.

After Thomas's death the building was sold to Samuel Lloyd and William Wilson, who continued to spin silk there.

The building, later known as the Old Silk Mill, was rebuilt after a fire in 1826. Subsequently the doubling shop collapsed in 1890 and the original building was extensively reconstructed after a fire which occurred on 5 December 1910, two years after silk throwing ceased. It was subsequently adapted to house the Derby Industrial Museum.