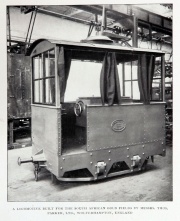 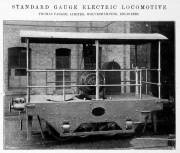 1894 The company was registered on 19 April, to acquire a business of electrical engineers and contractors[1]. The prospectus for the company was to carry on the business of manufacturing plant for electric lighting, electric transmission of power, electric railways, electric tramways, electro-chemical, electro- metallurgical, and such other purposes as are incidental or conducive to any of the above objects, and new developments and improvements in electrical and general engineering[2]. Freehold obtained of about seven acres in Wednesfield Road, Wolverhampton, on which to build the works, which were opened in December. Thomas Parker was contracted to be managing director for 10 years. C.T. Mander, J.P., Mayor of Wolverhampton, was chairman of the board of directors.

1895 Fitted electric lighting to the Theodore Mander's house, Wightwick Manor, using a steam-driven generator which supplied 100 volts D.C. for the lamps. A set of lead-acid batteries was added at a later date. The company also supplied dynamos for the new power station and electrical distribution system of Wolverhampton Council.

1897/98 Made the generators for the Folkestone Electricity Works, which produced 3,000 volts D.C. This was stepped-down at sub-stations, using rotary converters.

1899 Thomas Parker stepped down as MD but continued as a director and as consulting electrical engineer. He had also developed a method of manufacturing Chlorate of Soda using a version of the "Wednesfield Furnace" he had developed.

1899 About 700 employees. The staff were mostly pupils of Parkers from previous years[4].

1903 Business had declined and no dividend was paid.

1904 Thomas Parker left the business at the end of his contract.

1905 Poor business due to lack of orders, a state of affairs common throughout the electrical trade, exacerbated by the large amount of capital invested in the industry and hence the strength of competition, had necessitated the company going onto short-time working.