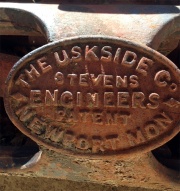 Presumably had been carried on as Uskside Iron Co until the 1860s.

1883 The firm was converted into a limited liability company

1889 The Uskside Engineering and Rivet Co Ltd. agreed to supply the Philadelphia and Reading Railroad Co., of USA, with their Stevens Improved Patent Fuel Presses, for 5 years. The Philadelphia and Reading Railroad transferred all of its interest in the patents, machines and inventions made under its agreement with Usk Engineering to the Reading Anthracite Pressed Fuel Co.

1898 Expansion of the forge department

Sometimes after 1906 the title was changed to Uskside Engineering Co

1907 Sale of the Rivet Department

WWI By May 1915, it was already producing proof shot for naval guns and 18 pound shells. A new erecting shop for 6-inch shells was built. This shop was fitted with the latest equipment to reduce handling to a minimum, including bench conveyors which kept the shells at the same level as the lathes from start to finish and therefore made it possible to employ a greater number of women in the shop.

In addition to proof shot, 18 pound and 6-inch shells, the works also manufactured pedestals for naval guns, gun carriage forgings, breach pieces for trench mortars and ships’ forgings such as shaftings and rudder mechanisms, making it something of a general purpose factory.

During the war it also continued to undertake urgent repair work for collieries.

1920 The works reverted to the control of Uskside Engineering on 31st March.

1920 Issued catalogue on electric haulage gear and details of forging in iron and steel. [3]