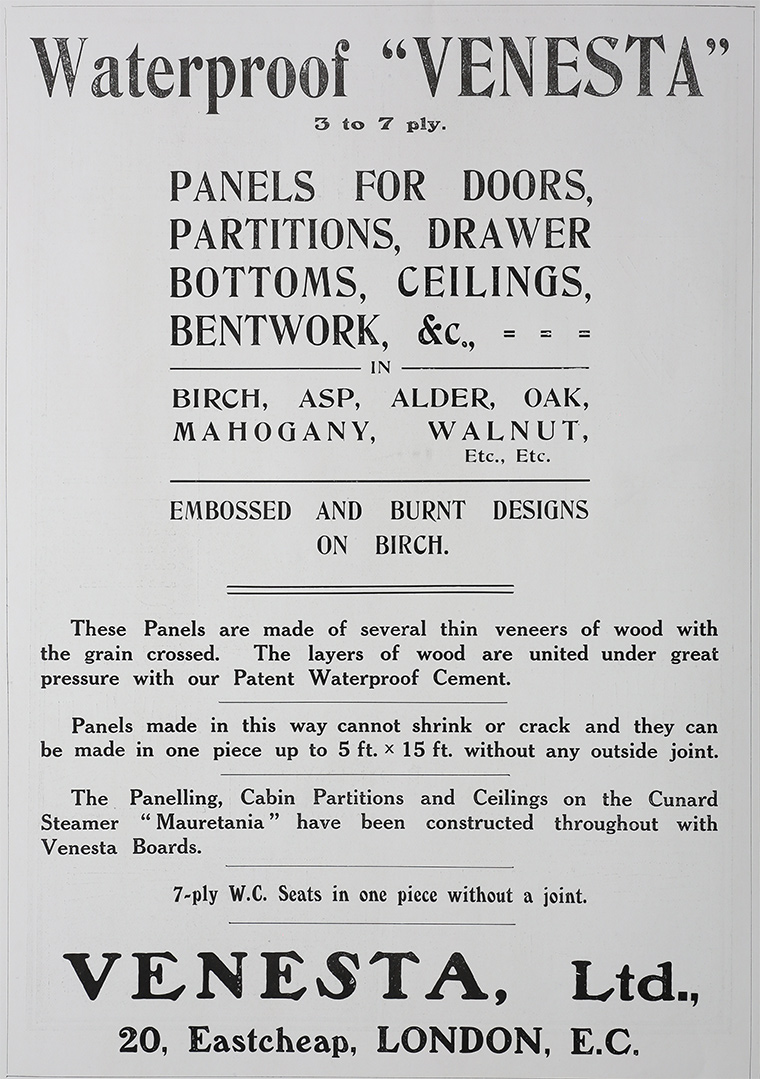 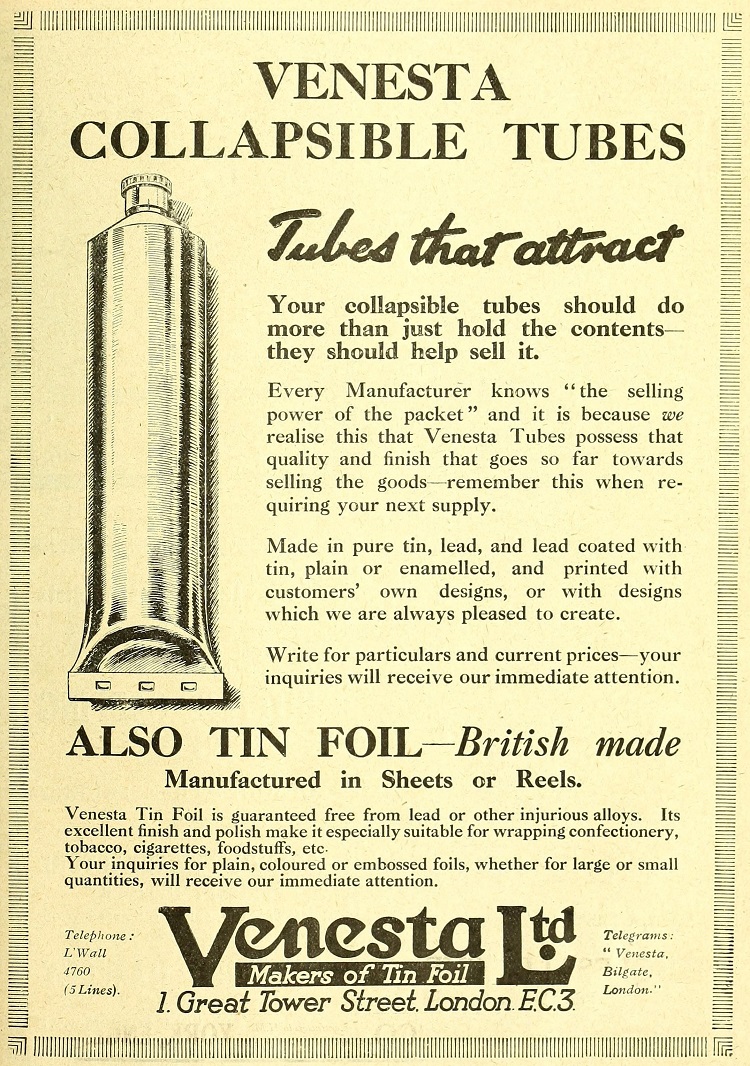 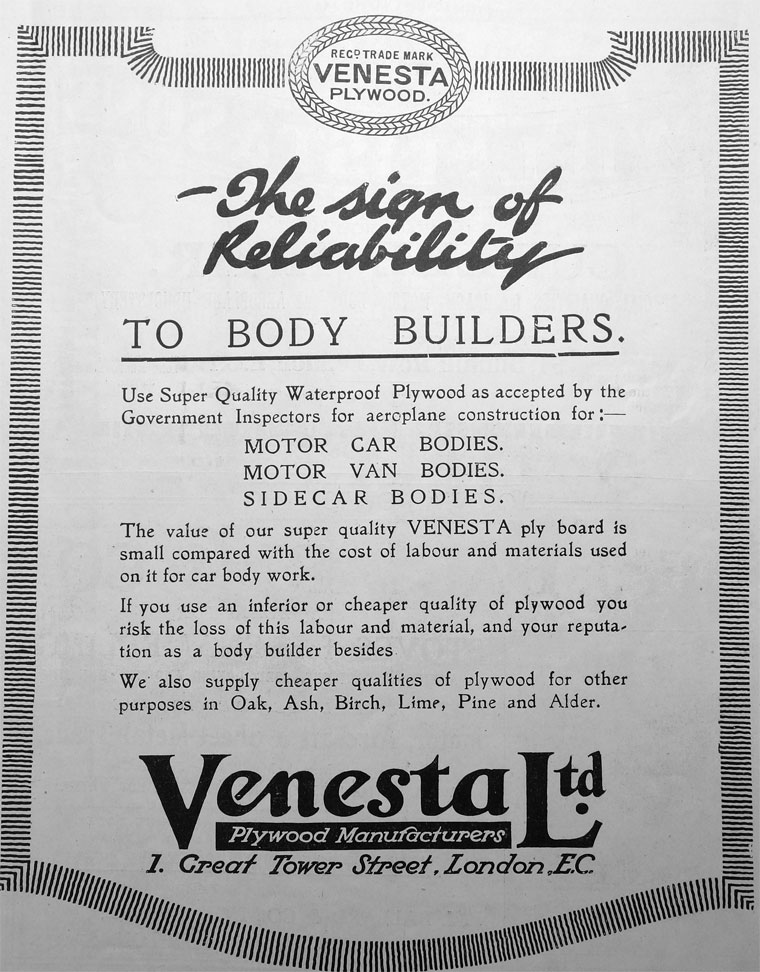 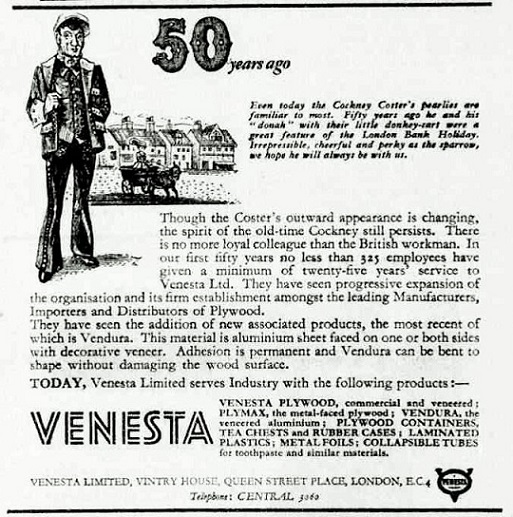 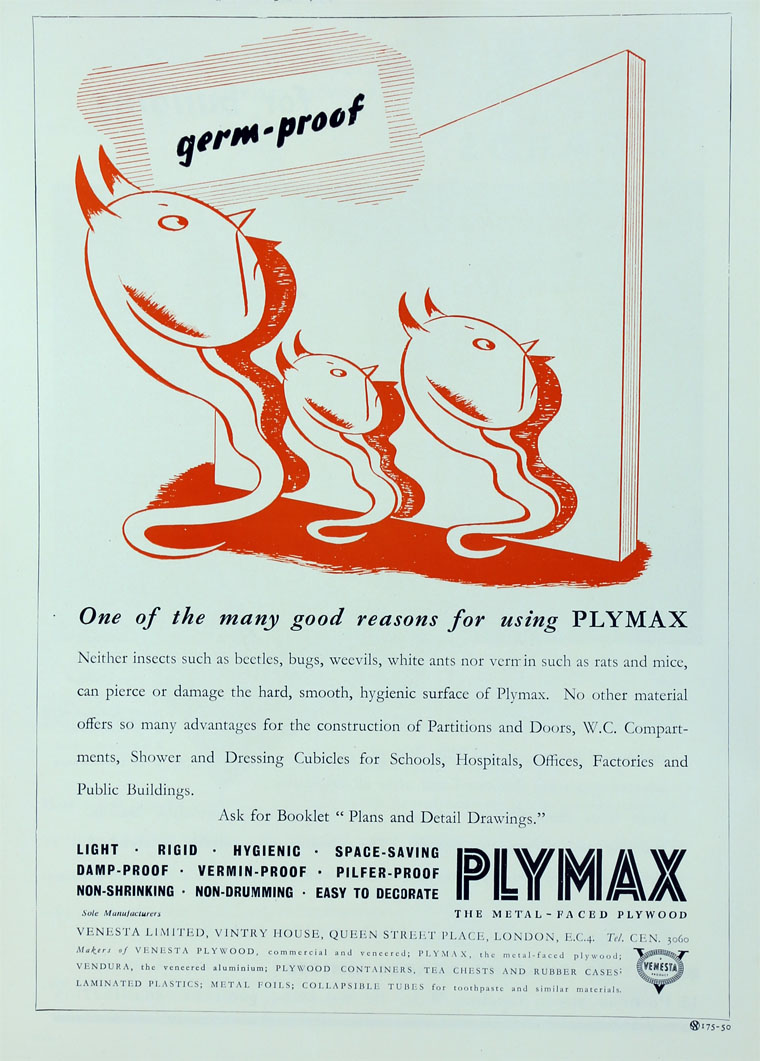 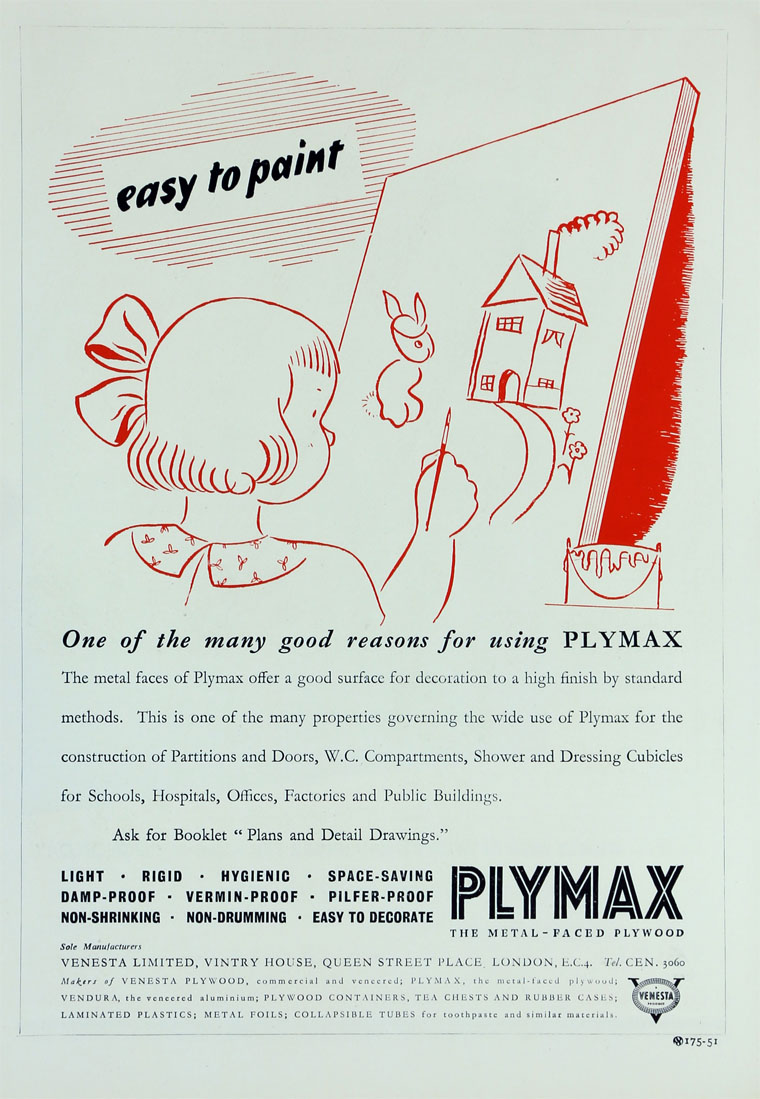 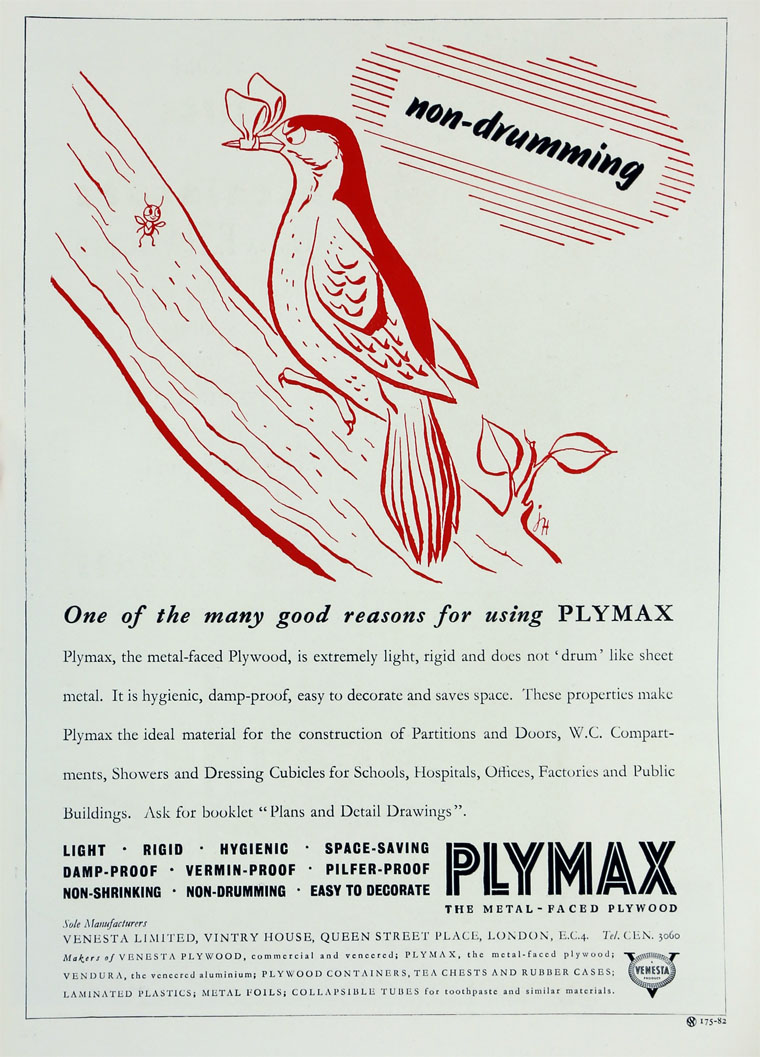 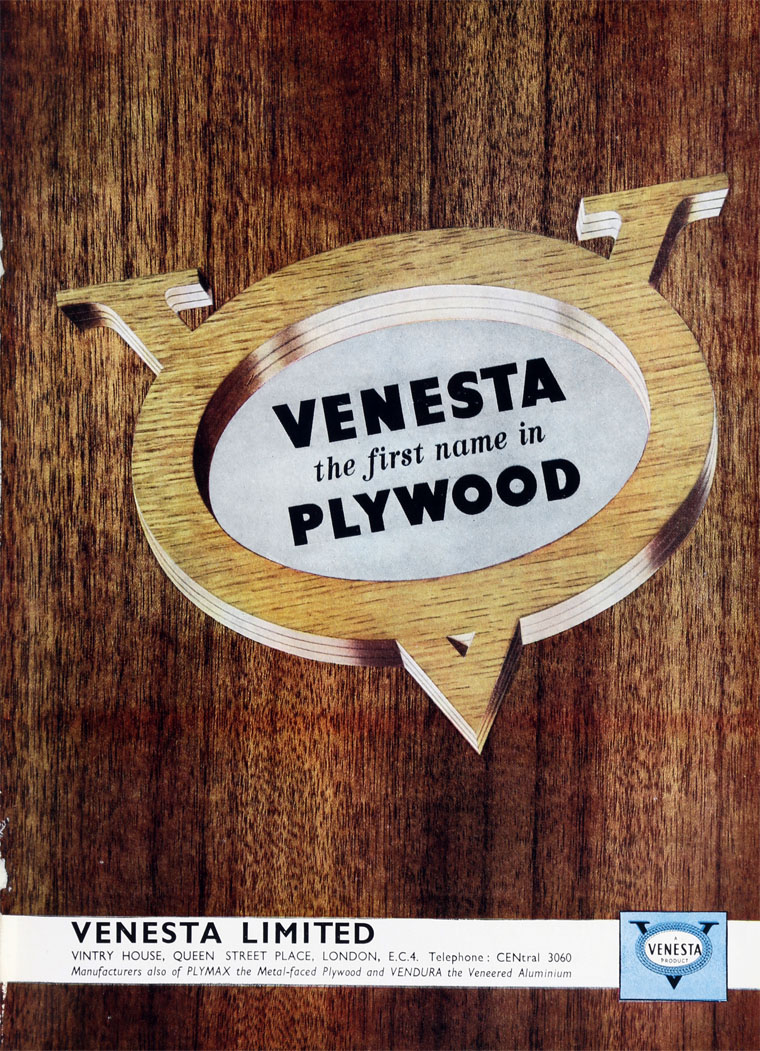 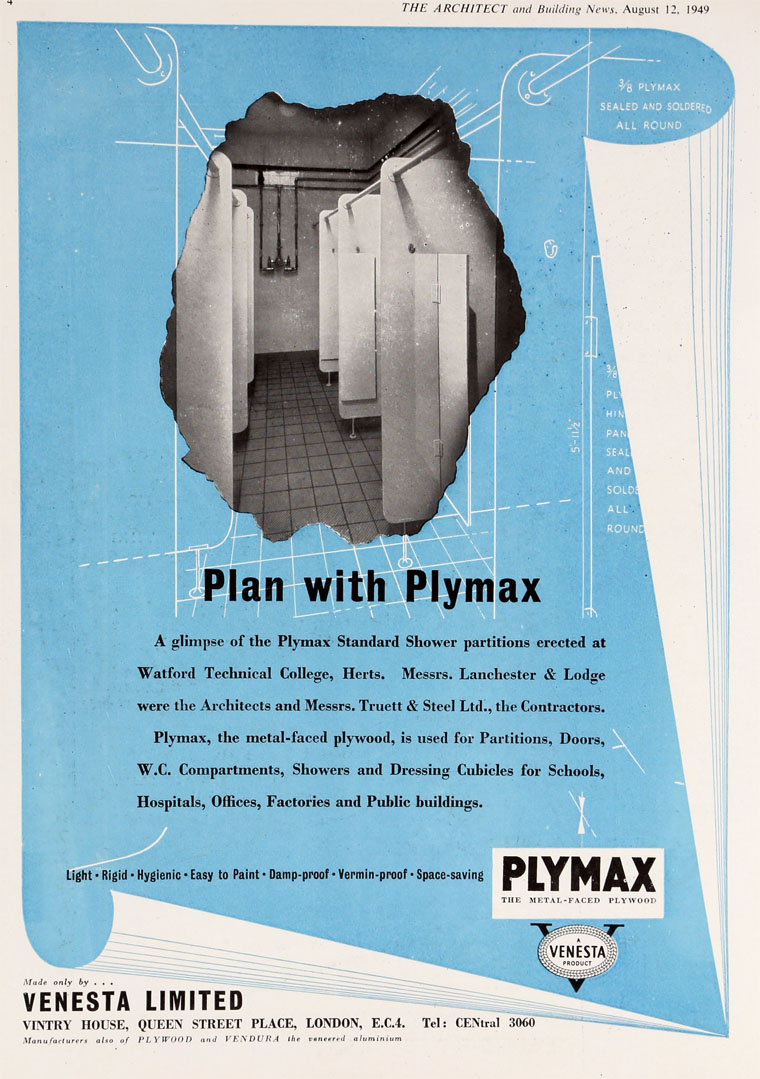 1896 The Venesta Syndicate was formed for the purpose of proving the value of Venesta board for making containers, tea-chests[1]

1898 The company was registered on 15 January, to acquire the business of the Venesta Syndicate, of St Mary Axe and Venesta Wharf, Limehouse, manufacturers of all kinds of boxes, packing cases etc; patents had been applied for [2]

1928 Closed the Millwall factory and concentrated all UK production at the Silvertown factory. Had started to introduce aluminium foil but this meant relearning the lessons from the introduction of tin[3]

1929 Headquarters moved to Vintry House; some of the rooms were panelled in plywood and some in Plymax. The metal rolling operations were improving. About 12 different departmental accounts were used to track the performance of the different sectors of the business[4]

WWII Supplies of plywood from the normal sources (Estonia, Finland) were curtailed. Made great quantities of "silver paper"[7] and foil for "Window"; made tubes for anti-gas ointment; supplied plywood for manufacture of Mosquito aircraft; the Indian and Ceylon operations continued to make tea chests with foil linings[8]

1956 Ekco Products of Chicago, and its British subsidiary Platers and Stampers, formed closer links with Venesta by appointing the chairman of Ekco to the board of Venesta[10]

1956 Acquired Acme Tea Chests and its subsidiary Empire Aluminium, which enabled the company to expand aluminium foil production without building a new factory for itself; raised capital by issue of shares to fund the acquisition and update the foil rolling machinery of Empire[11][12]

1957 Prestige Group and its American parent, Ekco Products, owned 25 percent of the company[13]

1959 After a reorganistion of Venesta into a group of separate companies, Reynolds T I Aluminium took over the foil business which operated in Britain, India and Ceylon. The remaining businesses, consisting of plywood and tea-chest trading and the manufacture of collapsible tubes, metal-faced plywood and containers, would continue as part of Venesta[15]

1965 The company merged its plywood interests with those of L. Keizer and Co and No-Nail Boxes to form Keizer Venesta.[17]