Difference between revisions of "Walpole, Webb and Bewley" 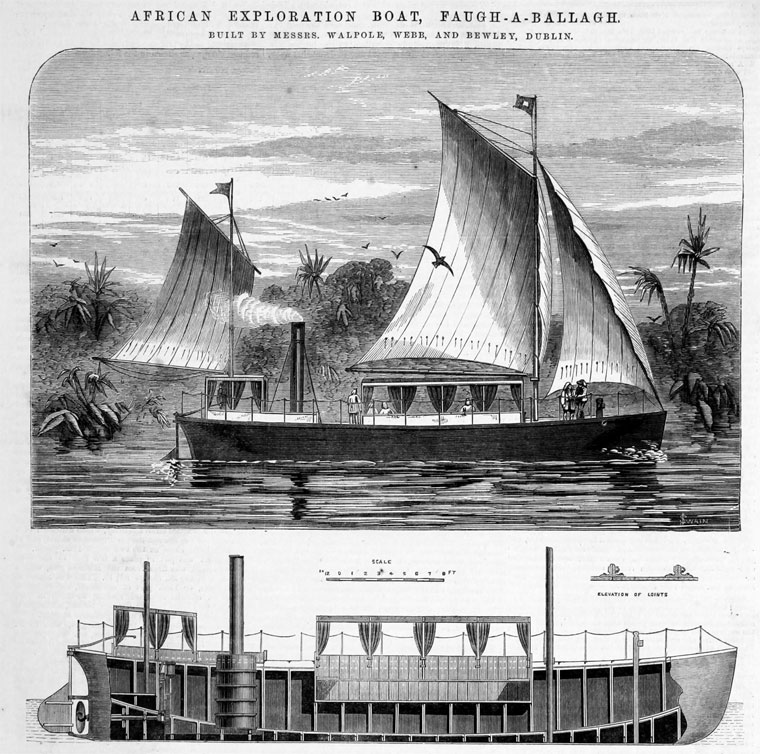 1864 – Strong demand led to Thomas Walpole, Henry Webb and the Bewley family to together open Dublin’s first large yard for iron sailing ships and paddle steamers. [1] They brought over many skilled craftsmen from England and Scotland. They were a Quaker company.

They launched their first vessel iron sailing ship “Knight Commander” which was also the first large iron vessel launched in Dublin. The Lord Lieutenant attended and the Marchioness of Kildare christened the ship with a bottle of wine. As the vessel slid away she was saluted by the guns of HMS Ajax and cheered by 20,000 spectators. It was owned by Carlyle and Gedes of Liverpool for the Calcutta trade. Their principal, T H Ismay would later found the White Star Line. [2]

1866 Extract of newspaper article: 'THE TRIAL TRIP OF "THE DUBLIN..... The new iron Steamship Dublin ..... proceeded on her trial cruise down the river on Saturday .... launched in August last, from the yard of the enterprising firm of Walpole, Webb, and Bewley; and she is the seventeenth iron vessel that I they have constructed She is a fine specimen of a mercantile vessel of her class, or rather size, as her class at Lloyd's is A 1 for twelve years. ..... She is furnished with watertight compartments, and with all the modern improvements necessary. Her dimensions are as follow :-Length between perpendicular, 175 feet; depth of hold, 14 feet ; breadth of beam, 28 feet; tonnage (builder's measurement) 659 tons. She is provided with a pair of inverted direct acting screw engines. The diameter of the cylinders being 34 inches, and the length of stroke 26 inches. The diameter of the screws is 10 feet, with a pitch of 17 feet, 6in. The indicated horse power on the trial equalled nearly 350. They were built by Messrs. Courtney, Stephens and Co., of Blackhall-place, and designed by Mr. John Bailey, C.E., one of the members of the firm. These engines for strength, compactness, and simplicity, can scarcely be surpassed...... Mr. Bailey, that the engines of the ship, on the plans laid down by him, were executed by Messrs. Courtney and Stephens (applause). Those engines, he trusted, would prove a success, and that it would be a means of obtaining for the city of Dublin a character for engineering as well as shipbuilding (loud applause). ..... Mr. Bailey, .... in responding, stated that he had every confidence that the engines would turn out a great success. .....Although they were the first engines which had been turned out by Courtney and Stephens it was to be hoped they would not be the last. The firm had machinery capable of turning out engines of double that power, and at as cheap a rate as could be done elsewhere...' [5]

1870 – Financial difficulties, which were possibly partly caused by higher building costs than British yards due having to import iron and coal, caused them to withdraw from major shipbuilding.

1871 – While the Bewley & Webb yard ceased to build seagoing vessels, they seem to have continued building vessels for the inland waterways of Ireland as well as conducting repairs, until the end of the century. [7]

Perhaps this firm was connected with Bewley and Co, of North Wall, Dublin, who launched a screw steam yacht in 1870.[8]