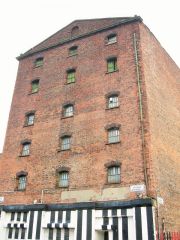 At the corner of Waterloo Road and Vulcan Street.

This warehouse, now the home of Vulcan Studios, is an early example of a 'fireproof' warehouse, using the minimum amount of wood in its construction.

'It is an important survival of one of the earliest fireproof warehouses associated with the international port city of Liverpool and constructed c.1842-4. It is an imposing and highly prominent building situated at the heart of the north docks complex next to the original C19 dock road, Clarence and Victoria Docks (now filled in), and Waterloo and Trafalgar Docks. It is well-preserved and retains the majority of original features including brick-vaulted ceilings, tile floors, sheet-iron loading doors, internal doors and shutters, cast-iron supporting columns and beams, lintels and sills, and the original enclosed fireproof stair. It possesses a wrought-iron roof structure similar to that of Jesse Hartley's Albert Dock warehouses (1841-5) and is unusual in incorporating roof slates that rest directly upon iron batons without fixings. Its innovative fireproof construction not only reflects the wealth of the warehouse's builder/owner and the importance of the goods contained within, but also technological advances in warehouse construction during the C19 and the changing face of the port of Liverpool.'

'Derby Buildings, Liverpool, June 6, 1843.
"Sir,—The late fires having drawn the attention of all parties interested in their prevention to the best means of rendering future warehouses fireproof, or as nearly so as possible, I take the liberty of calling your attention to two now in progress of erection by Messrs. Holme, in Vulcan-street, Clarence Dock, and for which I am supplying the iron-work, which enters very largely into their construction. My object in thus addressing you is to call your attention, and that of any other member of the council who may feel interested in the subject, to the iron beams for carrying the floors and the amount of pressure which they will sustain. Each beam is proved on the ground with an hydraulic press before being put in its place to the extent of 35 tons weight in the centre, being equivalent to a weight on the whole floor of five tons per square yard, — a greater amount of weight by about two tons per square yard than is generally calculated to be borne by existing warehouses. Many doubts having been expressed as to the prudence of using iron beams for warehouse floors, I am desirous that any parties who entertain such doubts may have an opportunity of testing their opinion by actual experiment, the proving of the beams being daily in progress. At the same time I beg to call your attention to the other iron-work used in the construction of these warehouses, the intention being to complete them without any wood-work, so that as far as stone, brick, and iron can make a building fireproof, they shall be so. The attention of the council is also called to a new and improved mode of recessing the warehouse doors, thereby doing away with pent-houses, and affording security to passengers from the fall of goods. I should not have ventured to bring the matter thus publicly before you did I not feel that I addressed you on a subject which is becoming daily of more importance, and regarding which it is desirable to obtain as much information as possible, both as to the bestt way of improving the construction of future, and altering the existing warehouses, there being in the building referred to many details connected with external iron-work which might easily adapted to the present warehouses. "I am, Sir, your most obedient humble servant, (Signed) " W. LAIRD." '[2]