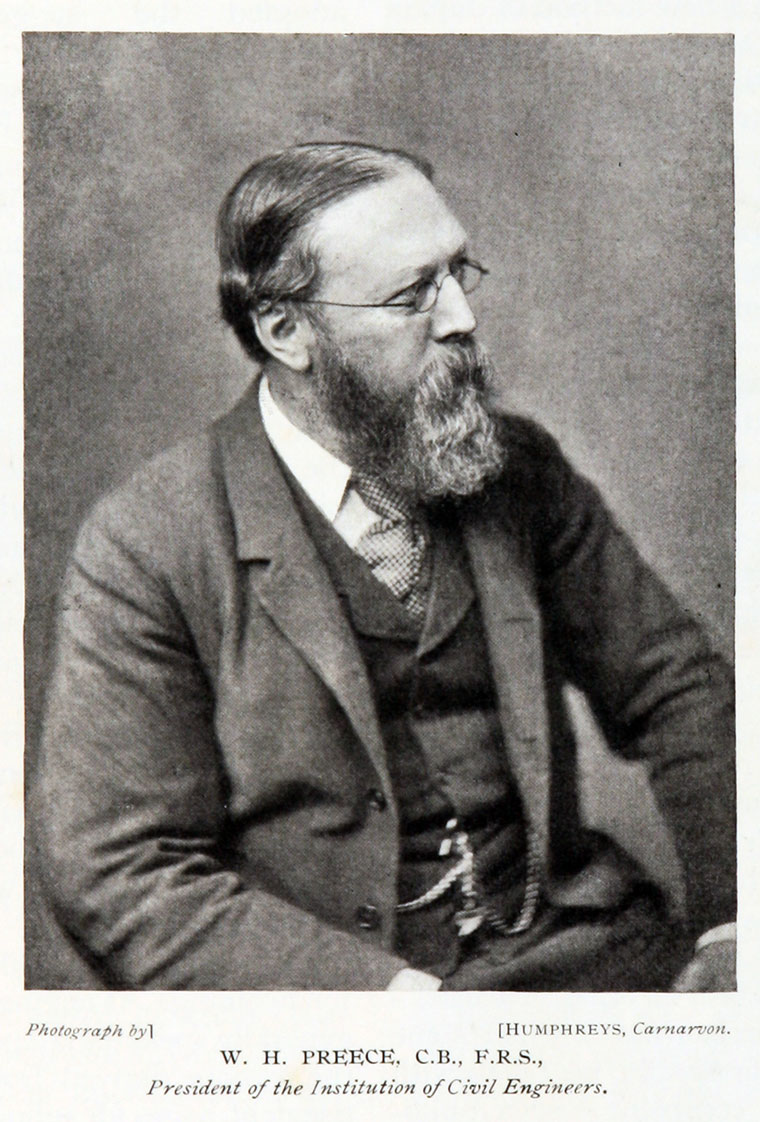 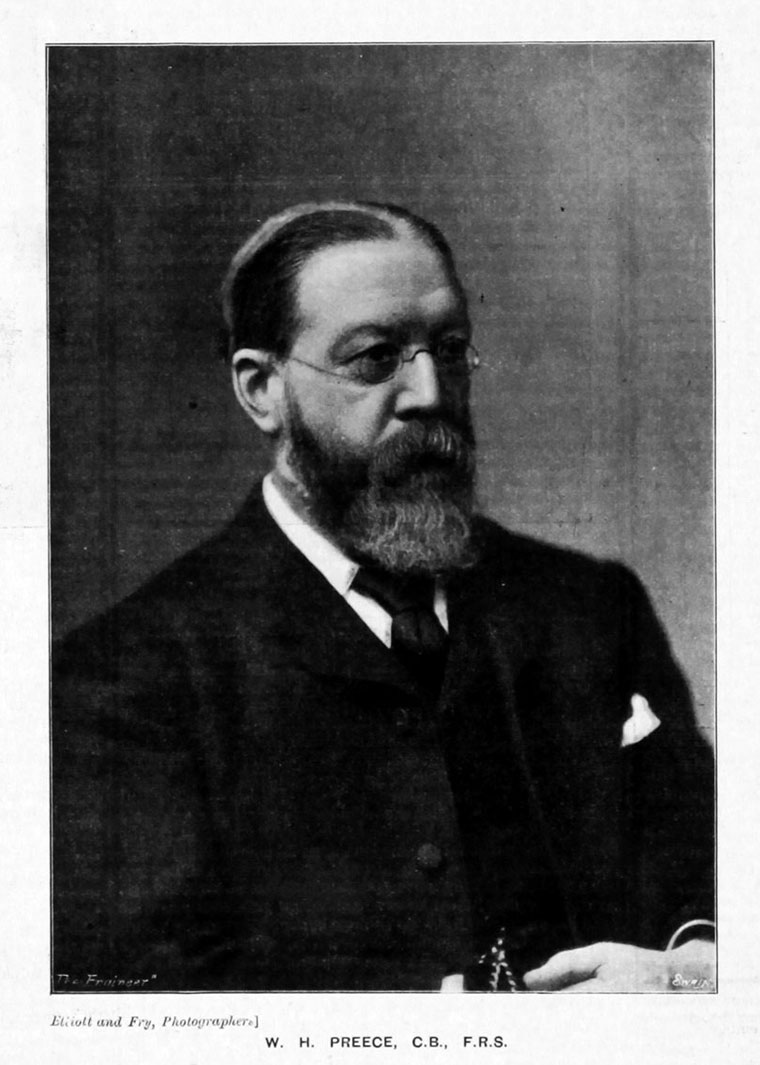 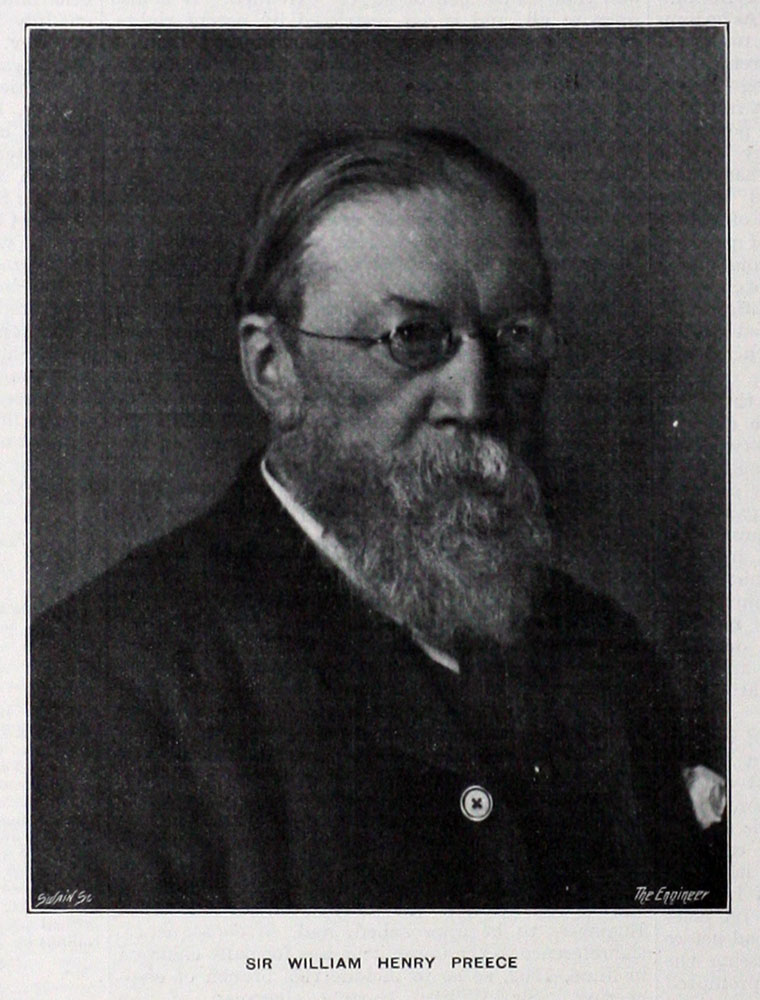 Educated at King's College School, London. He went on to contribute many inventions and improvements, including a railway signalling system that increased safety.

Spent a short period in the engineering offices of Edwin Clark[1].

1853 Joined the engineering staff of the Electric Telegraph Co.

1870 Joined the Post Office as Divisional engineer for the Southern District of the telegraphic system when the Government bought out the c.30 private telegraph companies.

1877 Was the first to import Bell telephones into the UK, which he demonstrated at the BA meeting at Plymouth

1880 President of the Society of Telegraph Engineers

1884 As a result of detecting electro-magnetic radiation from buried telephone cables, Preece conceived the idea of wireless telegraphy

1885 Preece and Arthur West Heaviside (the brother of Oliver Heaviside) experimented with parallel telegraph lines and an unwired telephone receiver, discovering radio induction (later identified with the effects of crosstalk).

1887 He had a long-standing rivalry with Oliver Heaviside - Heaviside had found theoretically that the clarity of telegraph and telephone signals could be greatly improved by loading transmission lines with extra inductance. Reasoning from inadequate experiments, Preece had already declared inductance to be prejudicial to clear signalling; Preece took steps to block Heaviside's publication; Heaviside thereafter took every opportunity to denounce Preece.

In 1889 Preece assembled a group of men at Coniston Water in the Lake District in Cumberland and succeeded in transmitting and receiving Morse radio signals over a distance of about 1 mile across water.

1892 Made radio experiments from Lavernock Point in south Wales to the island of Flatholm. Preece believed that the Earth’s magnetic field was critical in the propagation of radio waves over long distances.

1892. Proposed 'Lux' as a term to quantify illumination to the Royal Institution. [2]

With Gisbert Kapp prepared plans and specifications for the Bristol Electric Light Station.

1893 President of the Institution of Electrical Engineers

1896 When Guglielmo Marconi arrived in England, Preece encouraged him by obtaining assistance from the Post Office for his work.

1899 President of the Institution of Civil Engineers

1899 After retirement from the Post Office, he was active with his sons, Llewellyn and Arthur, and Major Philip Cardew in the engineering firm of Preece and Cardew. Preece also continued as a government consultant until 1904.

On leaving College he entered the office of the late Mr. Edwin Clark, where he studied for some little time.

In 1853 he entered the service of the Electric and International Telegraph Co., and three years later he was appointed superintendent of the southern district of this company.

At the age of twenty-four he was also given the appointment of engineer to the Channel Islands Telegraph Co.

In 1870, when the Government bought up the telegraphs, he was transferred to the Post Office as Divisional Engineer, becoming successively Electrician in 1877 and Engineer-in-Chief in 1892.

On his retirement, under the age rule, in 1899, he was appointed Consulting Engineer to the Post Office; this connexion terminated in 1904.

Thereafter he practised as consulting engineer in Westminster, in partnership with the late Major Cardew, his two sons, and others.

Sir William Preece's name is associated with many improvements and inventions in telegraph work. At the age of twenty-one he brought out a system of duplex telegraphy, and between 1862 and 1873 he turned his attention to railway signalling apparatus.

His other inventions relate directly to telegraph apparatus. He introduced the use of electric bells in 1865. He devised a new method of terminating wires in 1858, a new telephone in 1878, having brought over to this country the first practical telephone in 1877, and in 1892 originated a system of signalling across space by induction telegraphy.

When Mr. Marconi came to England in 1896 he found a warm supporter in Mr. Preece. He improved the overland lines, which suffered severely from the weather, and began to lay down trunk telephone lines, which his successor, Sir John Gavey, took up and carried through. In collaboration with other scientists he published several practical text-books.

In 1877 he went to America, on behalf of the Government to study telegraphy as practised in the States, and he visited various foreign countries, frequently in his official capacity as a member of conferences or of exhibition committees.

He was a member of the Royal Commission on Electrical Communication with Lighthouses and Lightships, which sat from 1892-7, and he was one of the six original founders of the British Fire-Prevention Committee. Sir William was an active member and supporter of the Engineering Standards Committee, and on the formation of the Electrical Section he was appointed Chairman of that section.

The Royal Society elected him a Fellow in 1881, and at the Paris Exhibition of 1889 he was appointed an Officer of the Legion of Honour. He was created a Companion of the Order of the Bath in 1894, and promoted to be K.C.B. in 1899 on leaving the Post Office, as a recognition of his services to that Department.

Two years ago, when his strength was failing, he went back to his native town of Carnarvon, where his death took place on 6th November 1913, in his eightieth year.