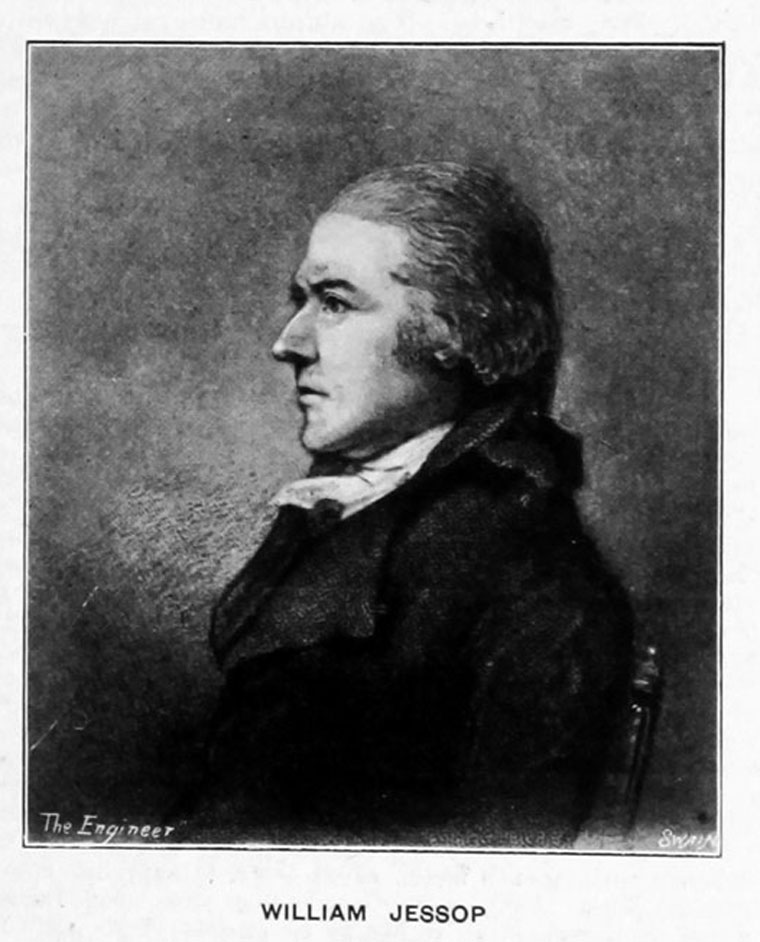 William Jessop (1745-1814) was a noted English civil engineer, particularly famed for his work on canals, harbours and early railways in the late 18th and early 19th centuries.

1745 January 23rd. Jessop was born in Devonport, Plymouth, to a Derbyshire family, the son of a shipwright Josias Jessop and his wife Elizabeth Foot. He was known to leading civil engineer John Smeaton through his work on the Eddystone Lighthouse.

When his father died, William Jessop was taken on as a pupil by Smeaton (who also acted as Jessop’s guardian), working on various canal schemes in Yorkshire.

After working for some years as Smeaton's assistant, Jessop increasingly began to work as an engineer in his own right.

c.1792 With fellow engineer Benjamin Outram, he founded the Butterley Iron Works in Derbyshire to manufacture (amongst other things) cast-iron edge rails – a design Jessop had used successfully on a horse-drawn railway scheme for coal wagons in Loughborough, Leicestershire (presumably Charnwood Forest Canal).

From 1784 to 1805 Jessop lived in Newark in Nottinghamshire, where he twice served as town mayor.

1805 Following the death of Benjamin Outram, Jessop and his family moved into Butterley Hall. In this year he finally started to receive dividends from the Butterley Co, the debts having finally been paid off.

A biography of William Jessop was published in 1979[1]

William's son, Josias Jessop (d 1826) was also a noted canal engineer; he also is credited with surveying and building the Cromford and High Peak Railway. Another son, William, took on the running of the Butterley Co. His son Henry Jessop worked in India.