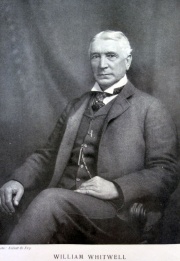 Son of William Whitwell of Kendal.

1901 Became President of the Iron and Steel Institute after being the Treasure. [2]

He was born at Kendal in 1835, and after receiving his earlier education privately he went to Tulketh Hall School, near Preston.

At the age of sixteen he entered the service of the firm of Whitwell & Co., carpet manufacturers, Kendal. Three years later he obtained an appointment in the colliery offices of Joseph Pease and Partners, Darlington, and in 1859, in conjunction with his brother, the late Thomas Whitwell - the inventor of the Whitwell hot-blast firebrick stove - he established the firm of William Whitwell and Co., and built the Thornaby Iron Works. They were subsequently joined by the late Mr. Gurney Pease of Darlington, who continued a partner until the time of his death.

A few years later the business was converted into a private limited company under the present name of William Whitwell & Co., Ltd.

Mr. Whitwell was closely connected with the Cleveland iron trade for over half a century, and had been one of its most prominent and honoured members. He gained the goodwill and respect of both employers and employed in the North of England by his advocacy of conciliation and arbitration in the matter of the adjustment of wages and other disputes arising between master and men; and he was one of the founders, in 1869, of the Board of Conciliation and Arbitration for the Manufactured Iron and Steel Trade of the North of England, which ever since that time has been most successful in regulating wages disputes in the iron trade of that district and in insuring a peaceable settlement of industrial differences. He was a member of the Standing Committee of the Board from its foundation, and in the early part of 1875 he succeeded Sir David Dale as its President, an office which he held continuously for thirty-two years, resigning in January 1907 on account of failing health, when he was elected referee to the Board.

Mr. Whitwell was one of the original members of the Iron and Steel Institute. He was elected Member of Council in 1874, and from 1890 to 1894 he held the office of Vice-President. When Sir David Dale was elected President in 1895 Mr. Whitwell succeeded him as Hon. Treasurer of the Institute, and continued to act in that capacity until he himself was elected to the presidential chair in 1901. He was thrice Mayor of Thornaby, and his public services were recognised by the conferment upon him of the Deputy-Lieutenantship of the North Riding of the County of York.