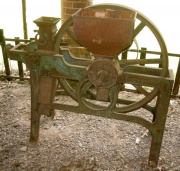 Machine at Avoncroft Museum of Historic Buildings. Note: The handle boss carries the name Woods and Co and the frame Woods ..... & Warner

1812 Established as a smithy by the proprietor James Woods

At a later stage Woods was joined by J. S. Cocksedge.

1862 Woods and Cocksedge made their first engine, a vertical single-cylinder engine.

1868 Advert: 'SUFFOLK IRON WORKS, STOWMARKET
WOODS and COCKSEDGE, beg to notify that Mr. EDWARD WARNER, who was for some years with the well-known Engineers, Messrs. Easton, Amos and Sons, London, has joined them in Partnership, and the business will in future be carried on under the name of WOODS, COCKSEDGE, AND WARNER.
W., C., W. take this opportunity in saying, that in addition to the Manufacture of AGRICULTURAL IMPLEMENTS, Special Attention will be devoted to Millwrighting, Hydraulic, and General Engineering.
W. and C. are grateful for the confidence hitherto placed in them, and respectfully solicit a continuance for the New Firm.
WOODS, COCKSEDGE, AND WARNER, Millwrights, Hydraulic, & General Engineers, Suffolk Iron Works, Stowmarket.'[1]

1873 'MARRIAGE SUPPER TO THE EMPLOYEES OF MESSRS. WOODS, COCKSEDGE, & Co.
Till within a short time, the present firm of Messrs. Woods, Cocksedge, and Co., Agricultural Implement Makers, Stowmarket, was known by the name of Messrs. Woods, Cocksedge, and Warner; but a few months ago Mr. E. L. Morris, from the firm of Ravenhill, Hodgson and Co., London, became a partner, and the name has been altered to the present title, viz, Messrs. Woods, Cocksedge, and Co. ...... In short, on Wednesday, Mr. Morris was married to Miss Sophy Mary Miles, of Manor House, Friern Barnet. Mr. Morris being anxious that all connected with the firm should celebrate this important event, invited all connected with the works to supper in the Corn Hall, at Stowmarket, and afterwards gave them an opportunity of drinking his health and that of his newly wedded wife. It is needless to add that this was an act of kindness which was most thoroughly appreciated. Supper was spread at eight o'clock, and between 200 and 300 persons were present. .... The chair was occupied by Mr. E. F. Woods, the senior partner of the firm, supported by Mr. Spencer Freeman and Mr. J. E. Chapman. Mr. E. Warner, another member of the firm, filled the Vice-Chair; but no other member of the firm was present, Mr. Cocksedge being away on business, and Mr. Morris, of course on his wedding tour. ...... The Chairman said his work had been always greatly lightened by his many energetic helpers. He hoped, he said, to see many more instances of three generations of men who had worked for the firm before he died. There were in the room some men who had worked 50 years for the firm. Others there were who had worked 20 or 30 years. They had always worked very comfortably together, and hoped for many years they would continue, and if so, being united they must succeed. .... Mr. I. A. Rust proposed "The Original Founder of the Iron Works, Mr. James Woods," and, in doing so, alluded to the time when he, himself, had been a pupil at the Works. .... '[4]