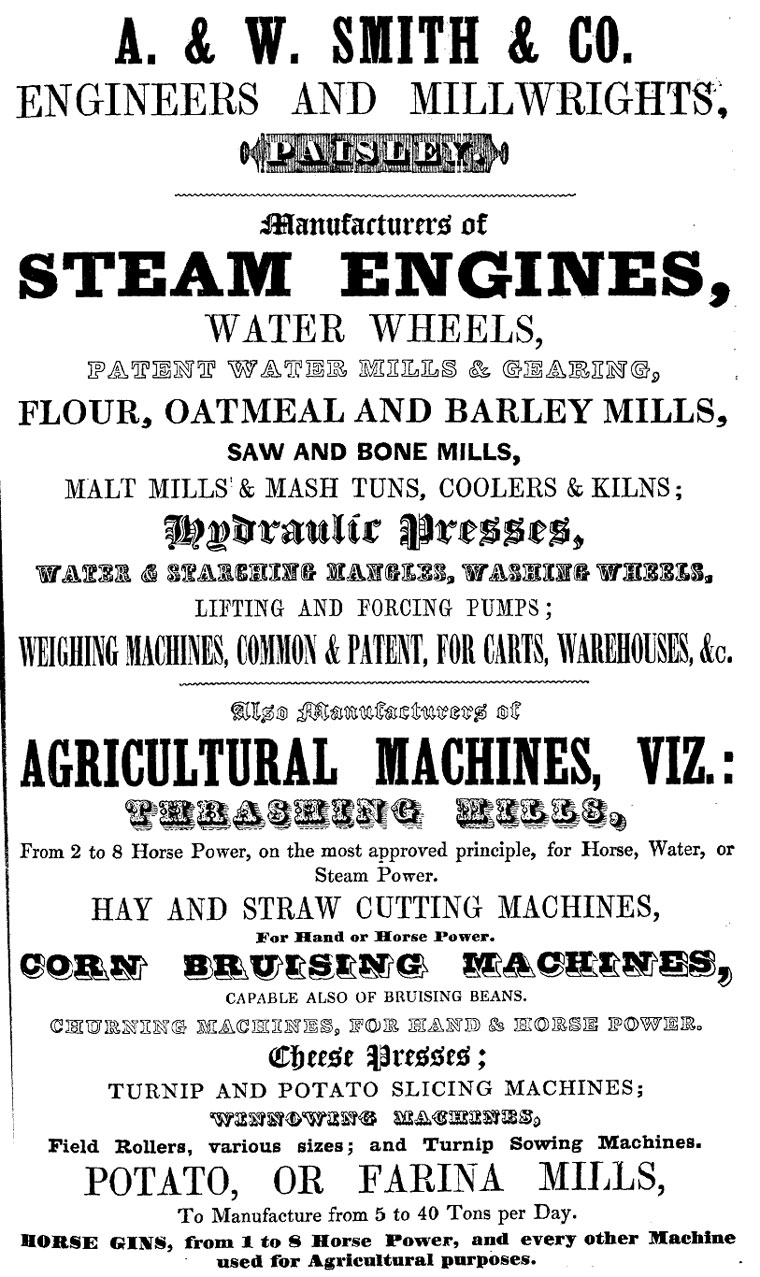 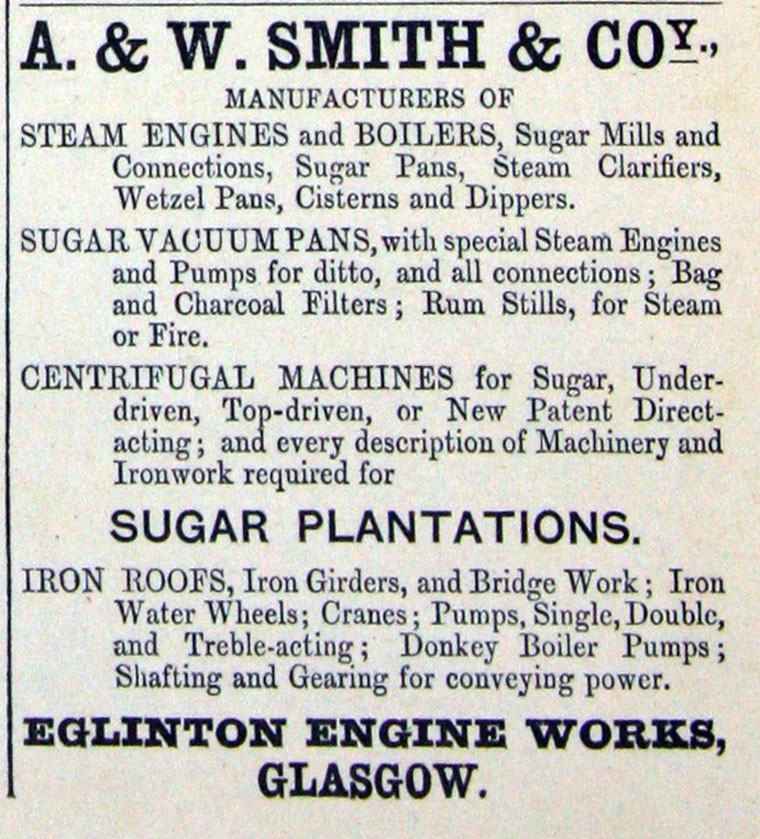 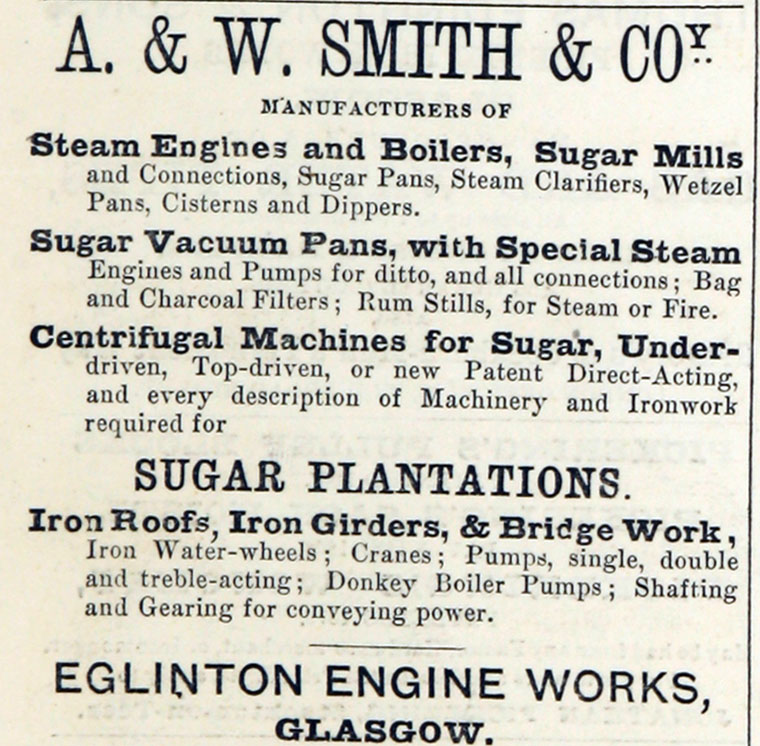 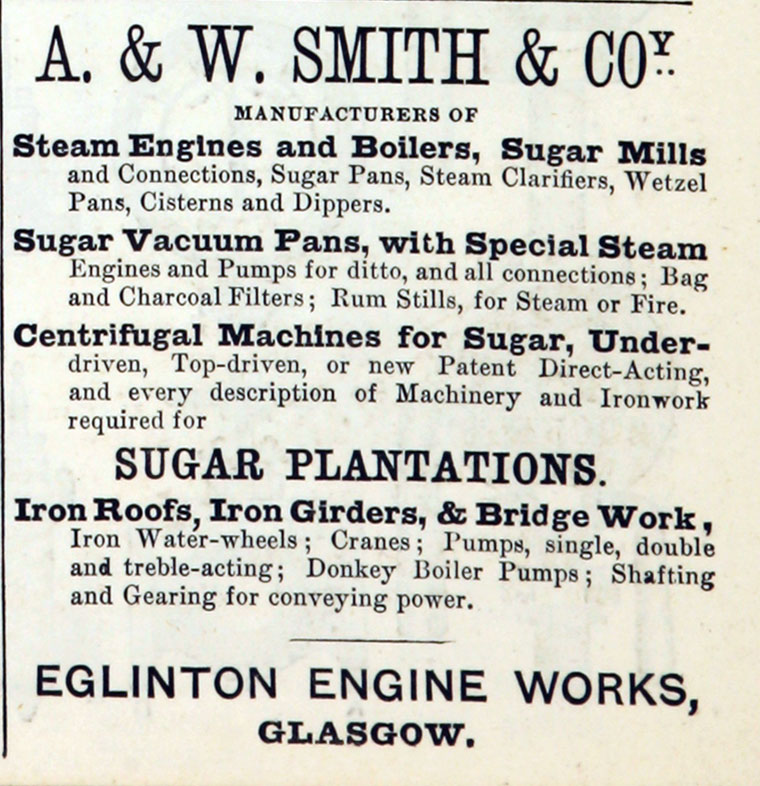 Mr Smith had a considerable reputation as a maker of agricultural, corn, flour and saw-mill machinery in his works at Paisley, formally millwright and engineers.

1838 On the death of their father, his sons Andrew (Alexander?) and William went into business together.

1837 Brothers Andrew and William Smith, millwrights, formed a partnership as agricultural and general engineers in Paisley, Renfrewshire, under the name A. and W. Smith and Co, millwrights and machine engineers. Their first machine was a steam-driven sugar mill for Tobago, West Indies.

1855 The firm moved to the Eglinton Engine Works in Tradeston, Glasgow, and began to specialise in the manufacture of sugar machinery, having been introduced to the sugar industry by W. and A. McOnie, engineers, Glasgow, who had subcontracted them to manufacture cattle-driven sugar mills.

1869 Railway wagons and weighbridges were also a speciality and the company produced its first tank locomotive for Robson Maynard and Co, coalmasters, Middlesborough.

1880 William Smith left the firm and began business with two of his sons under the style of William Smith and Sons; he was just erecting new works in Particle, Glasgow, when he died very unexpectedly.

1895 William and Hugh Smith bought out Alexander Smith's share in the business.

1896 The firm became A. and W. Smith and Co Ltd. As well as sugar machinery, the firm also produced bridge and structural steelwork for locomotive sheds and buildings.

In the twentieth century, the inter-war period saw the sugar machine industry struggle in the general depression of world economy. Most sugar-producing areas were equipped with relatively new machinery with a long life expectancy so the stable demand for sugar meant little work for machinery builders.

1930s Most of the West of Scotland firms survived, but only through diversification. A. and W. Smith and Co, bought the power hammer business of R. G. Ross and Sons in the early 1930s, made Loudon planers for Russia, and took out a licence for sandslingers for foundry use.

The 1950s and 1960s saw a collapse in the industry with A. and W. Smith and Co acquiring the goodwill of most of its former rivals.

1953 The company was acquired by Tate and Lyle, sugar refiners of London.

1967 They acquired Mirrlees Co and subsequently traded as Smith Mirrlees. Smith Mirrlees was acquired in 1988 by Fletcher and Stewart, sugar machine manufacturers of Derby.

They ceased to operate at the Eglinton Works in the late 1980s.

2002 A. and W. Smith and Co was a non-trading subsidiary company of United Molasses Co, itself a subsidiary of Tate and Lyle. The company was the last sugar machinery manufacturers in Scotland.