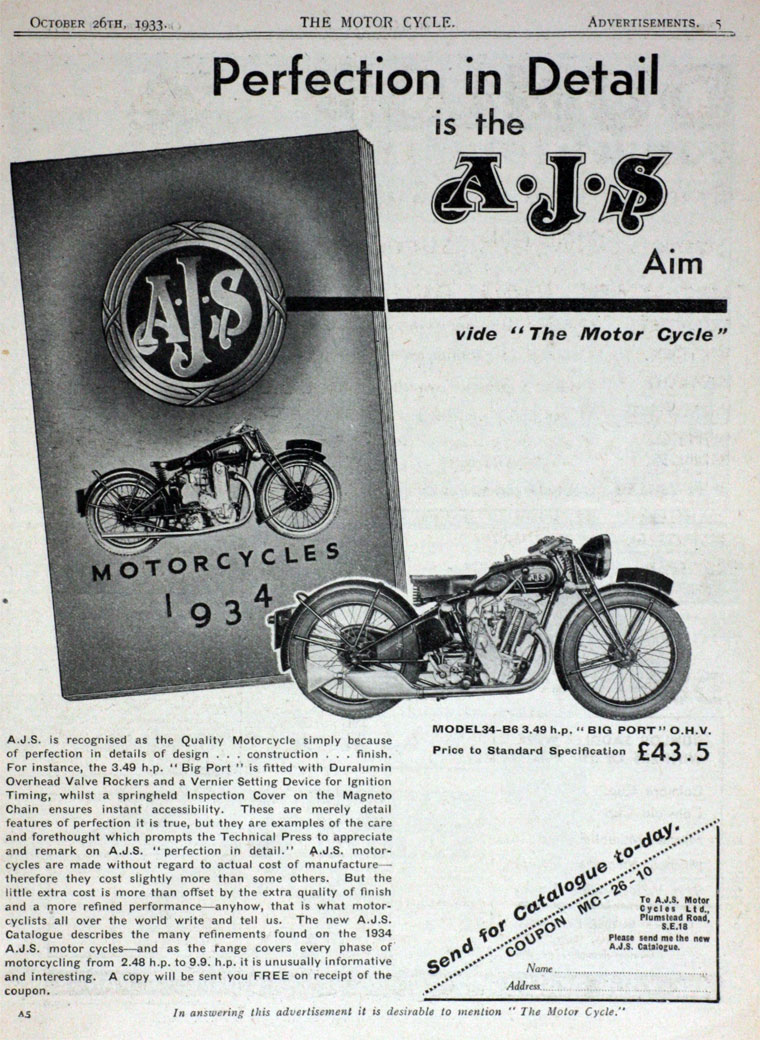 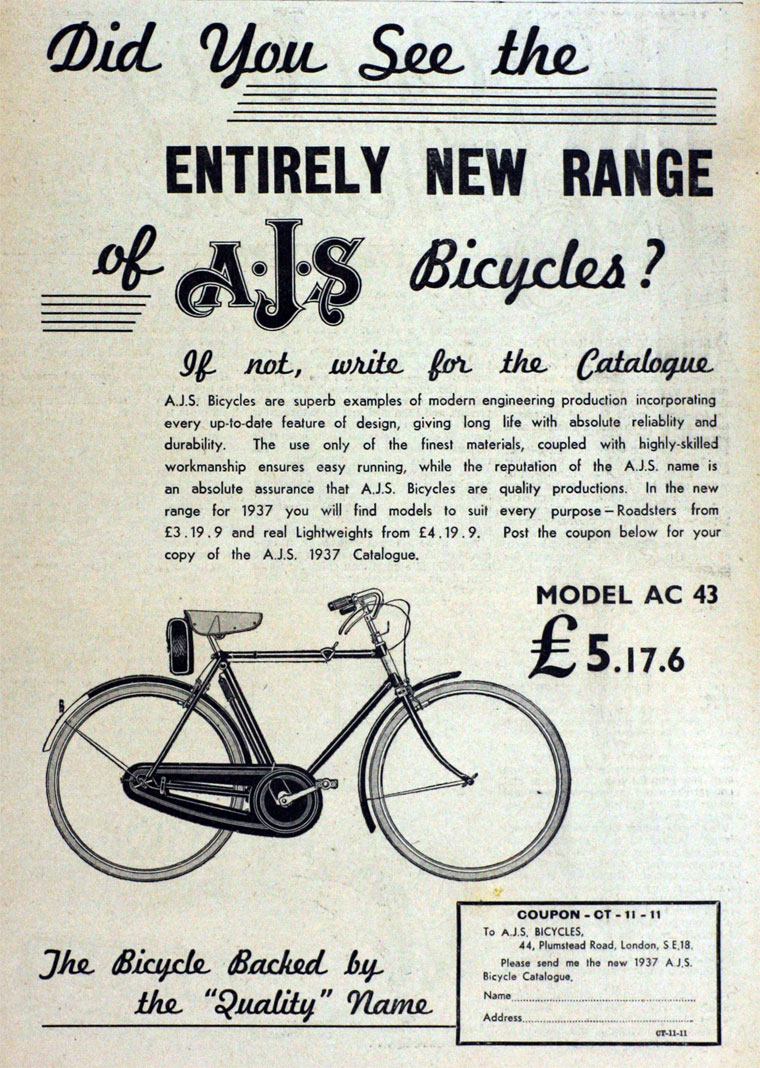 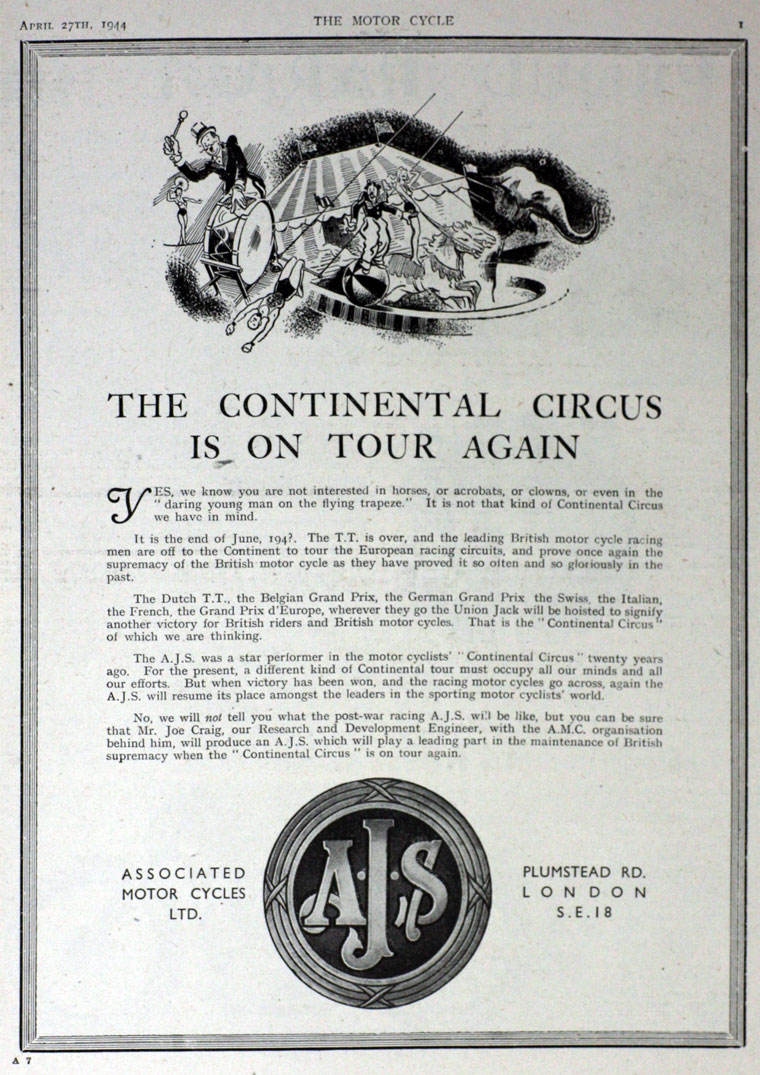 Founded by the Collier brothers - Henry Albert Collier and Charles Richard Collier - as a parent company for the Matchless and AJS motorcycle companies. It later absorbed Francis-Barnett, James, and Norton before incorporation into Norton-Villiers.

1937/38 Name changed to Associated Motor Cycles. The company designed a new range of Sunbeam motorcycles, maintaining the quality and engineering.

1939 A 495cc AJS V4 was built to compete against the supercharged BMWs then dominating racing. The bike was a water-cooled and supercharged. In 1939 the dry-sump V4 was the first bike to lap the Ulster Grand Prix course at over 100 mph. It weighed 405 lb. Its top speed was 135mph.

WWII During the Second World War, Matchless manufactured 80,000 G3 and G3L models for the armed forces as well as part for aero-engines.

1941 Matchless motorcycles introduced telescopic front forks called "Teledraulic" forks, considered by some to be the first major innovation in front suspension in 25 years.

1944 Sold the Sunbeam cycle and motorcycle business, which was a small part of the overall business[2], to BSA

1946 Freddie Clarke joined AMC as Chief Development Engineer after a difference of opinion with Triumph.

1951 AJS development engineer Ike Hatch developed a 75.5 mm bore x 78 mm stroke, three valve head version of the 7R making 36 bhp. It was called the AJS 7R3, and was Ike's response to the Italian multi-cylinder racers. They did well enough in their first year, not as well in the second.

1953 Associated Motor Cycles consisted of the AJS, Matchless, James and Francis-Barnett marques. It then acquired Norton including the wholly-owned subsidiary R. T. Shelley[5].

1954 Tube Investments purchased the name and goodwill of the James pedal cycle business from AMC. Production of James motorcycles continued at Greet, Birmingham[6]

Post-war landmarks start with the production of Matchless/AJS 350cc and 500cc singles, developed from the legendary war-time Matchless G3 produced for the Army. From 1948 competition models of the singles were produced which gave the company some memorable wins.

For 1954 Jack Williams, the works team manager, developed the AJS 7R3 further, lowering the engine in the frame, and making some tuning changes that gave 40 bhp @ 7800 rpm. It immediately won the first two rounds of the World Championship and took first at the Isle of Man TT. These were factory specials, but one has survived, and a second has been reconstructed from spares. In 1953 there was a Clubman range of Matchless/AJS 350cc and 500cc singles, and the production model Matchless G45 500 twin became available.

After 1954 AMC withdrew from the world of works- and one-off road racing at the end of the 1954, with the death of Ike Hatch, and in the face of fierce competition from the other European bikes. Instead of works specials, AJS and Norton would make the production versions of the Manx Norton and the standard two valve AJS 7R, for privateers.

By 1956 there were eight models in the line up but the number had dwindled in 1965. The G3L was the first to feature the “Teledraulic” front forks. 600cc and 650cc vertical twins were introduced in 1956 and 1959 respectively.

On the racing front AMC were fielding the AJS Porcupine (500cc forward facing parallel twin), the AJS 7R (32 bhp, 350cc OHC single), the Matchless G50 (a 500cc variant of the 7R) and by 1951, the Matchless G45 (500cc vertical twin). The AJS Porcupine had been designed for supercharging, before the rules changed ending supercharged racing motorcycles, but even so, Les Graham won the 1949 World Championship on an unsupercharged AJS 500cc Porcupine.

1959 J. Brockhouse and Co sold the US Indian Company to Associated Motor Cycles; the name of the Indian company was changed to Brockhouse Corporation[7]

1962 With the closure of the Norton plant at Birmingham in 1962 and the merger of Norton and Matchless production, the future was beginning to look rather bleak. In the sixties, with sales declining AMC made the commercial decision to focus on the Norton twins and the Matchless/AJS singles but they were not to be successful and the factory ceased production shortly afterwards.

Some models were "parts bin specials" put together at the request of the American dealers. The Americans were desert racing, so Berliners sent AMC an example custom bike using a Norton 750 motor in a G80CS frame, and asked them to build them some. This was the last Matchless motorcycle, the 748cc G15 which was also sold as the AJS Model 33' and as the Norton P11. The G15 was produced up until 1969. A Mk2 version was sold in Britain from 1964.

Matchless/AJS built predictable handling, comfortable, well-made, reliable and economical motorcycles, for their day. Unfortunately such attributes were not enough to keep them in business.

By the late 1960s, competition from Japan had driven the British motorcycle industry into a precipitous decline.

1966 Continuing poor sales led to the collapse of AMC, which became part of a new company, called Norton-Villiers under Manganese Bronze Holdings.

1966 Colin Seeley purchased the AMC race shop, including the rights. He sold the Norton side to John Tickle in order to concentrate on the AMC models.

1974 This only staved off the problems for a little while and Norton-Villiers eventually went into liquidation in 1974. Norton was reformed with financial assistance from the British government as Norton-Villiers-Triumph (NVT) actually incorporating the majority of the BSA motorcycle concerns but omitting the BSA name for Triumph. In part due to a labour dispute, NVT later went into receivership in 1974.