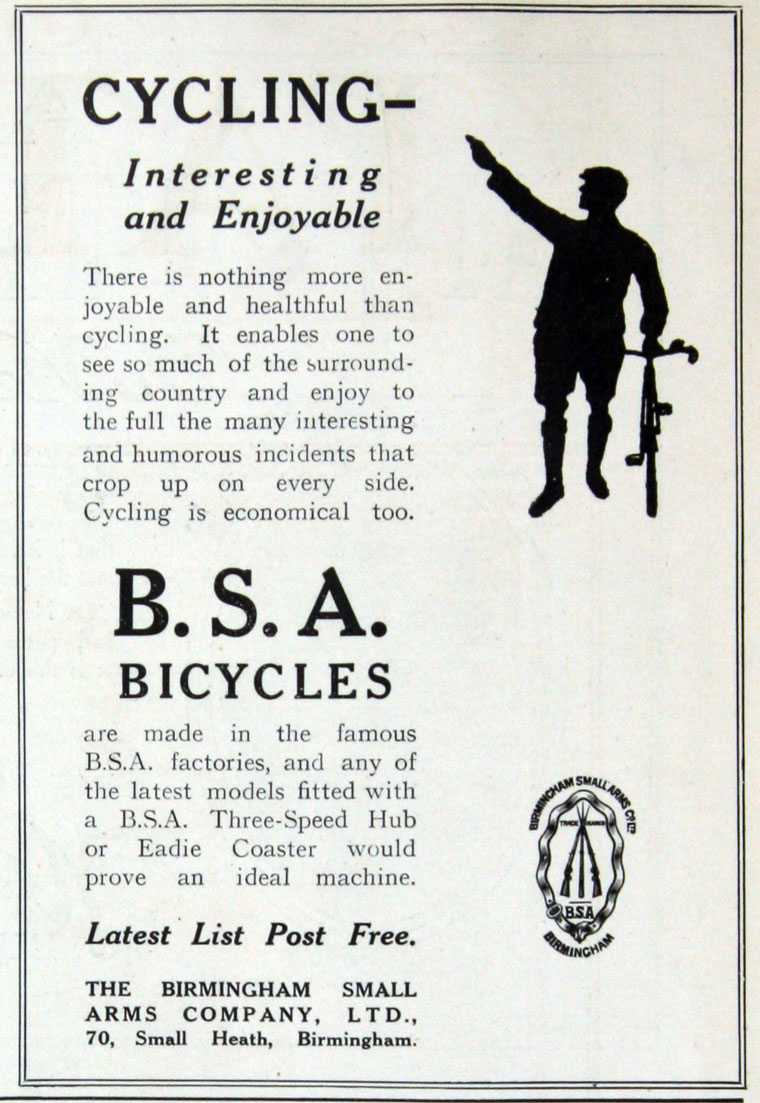 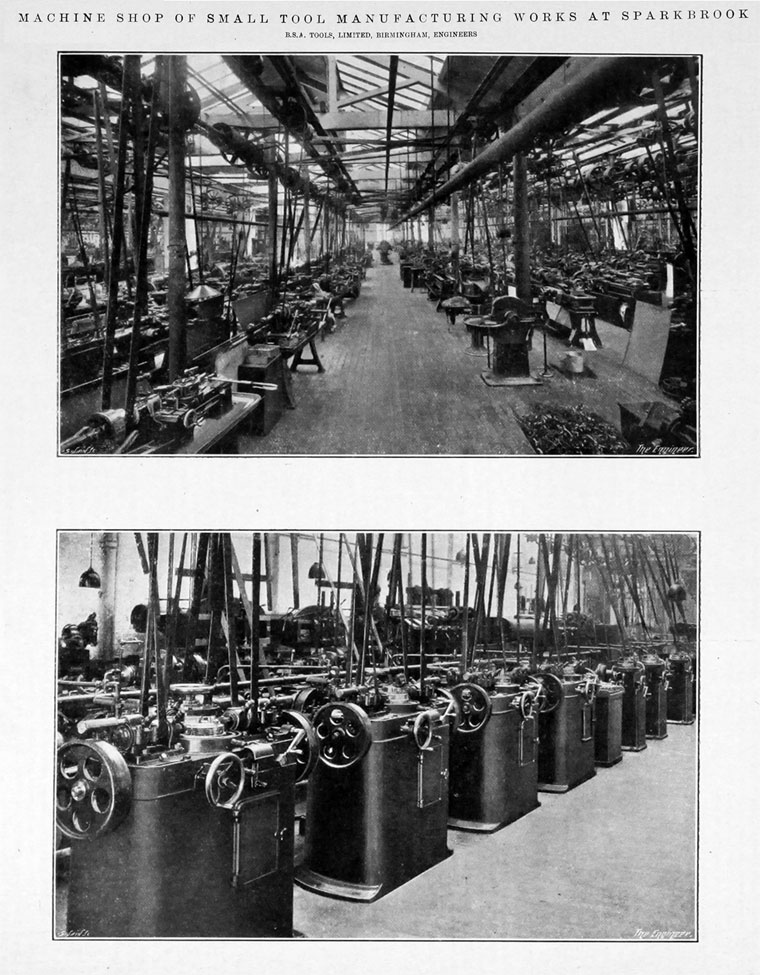 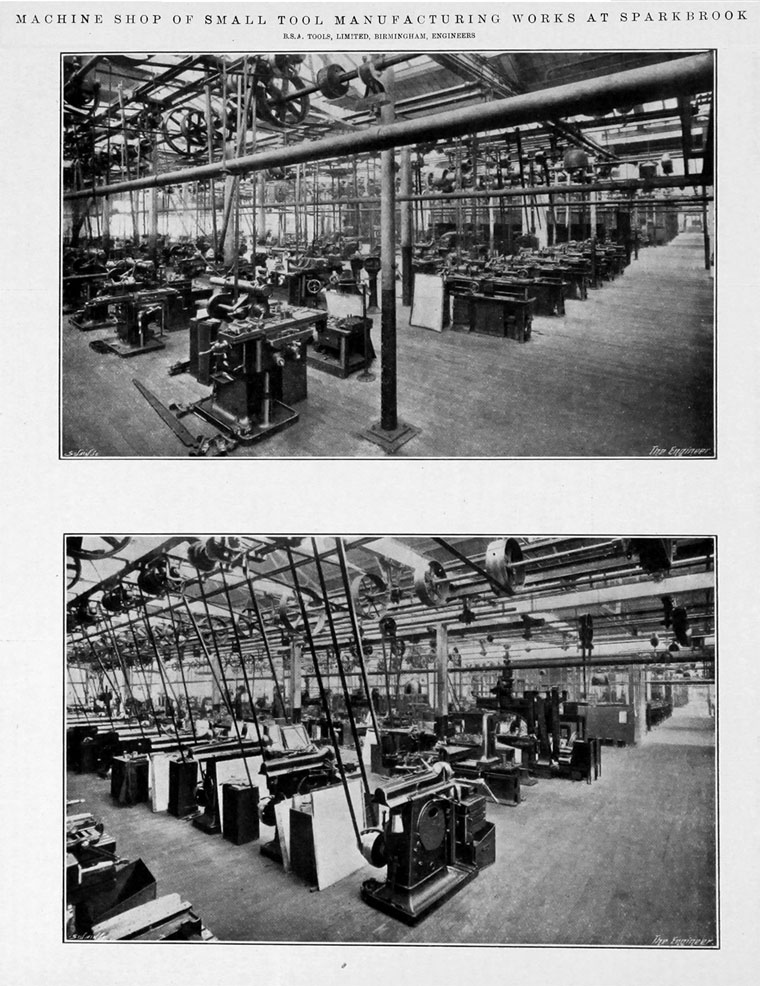 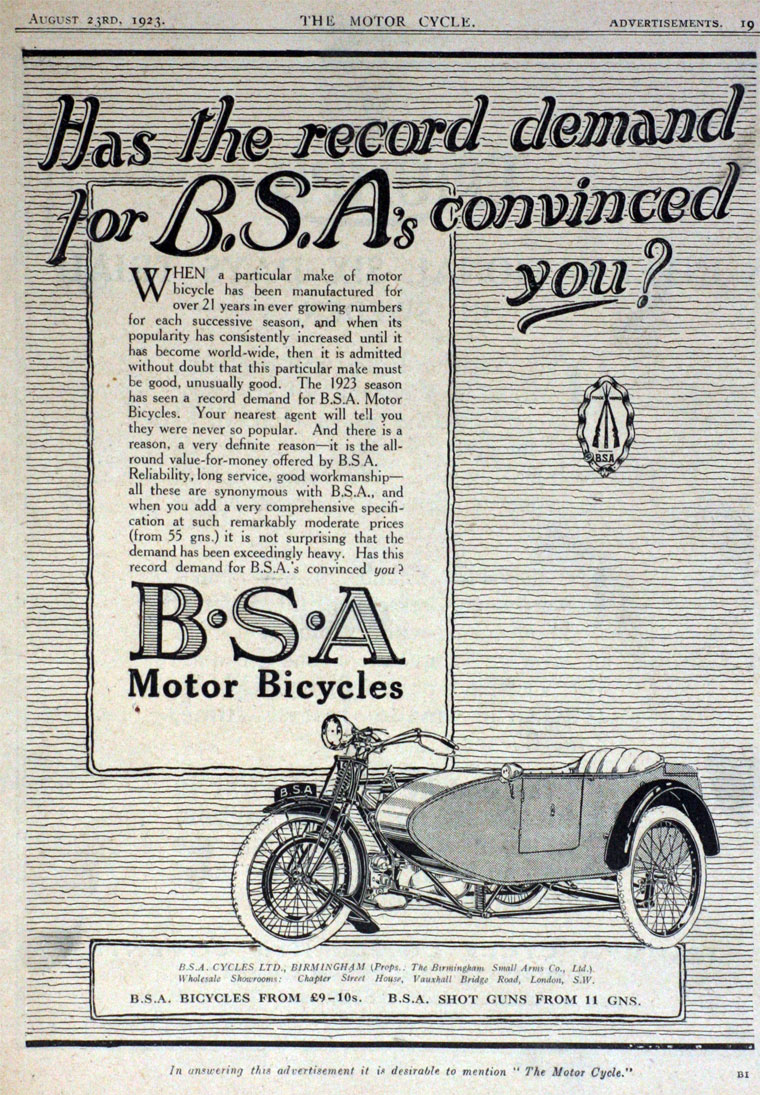 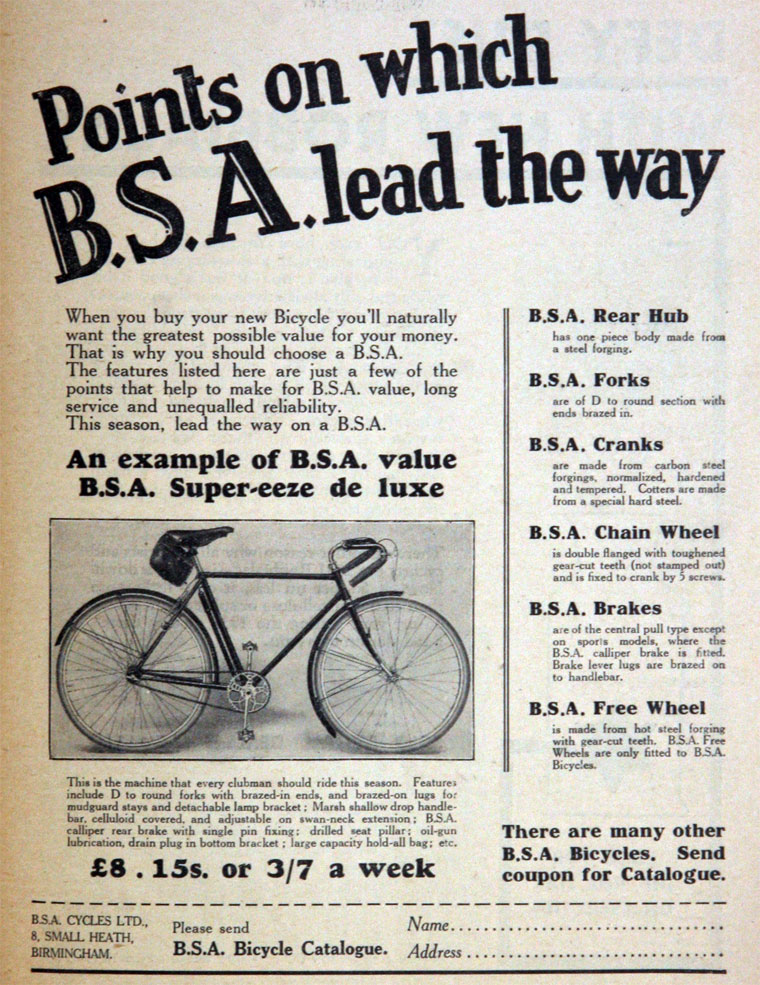 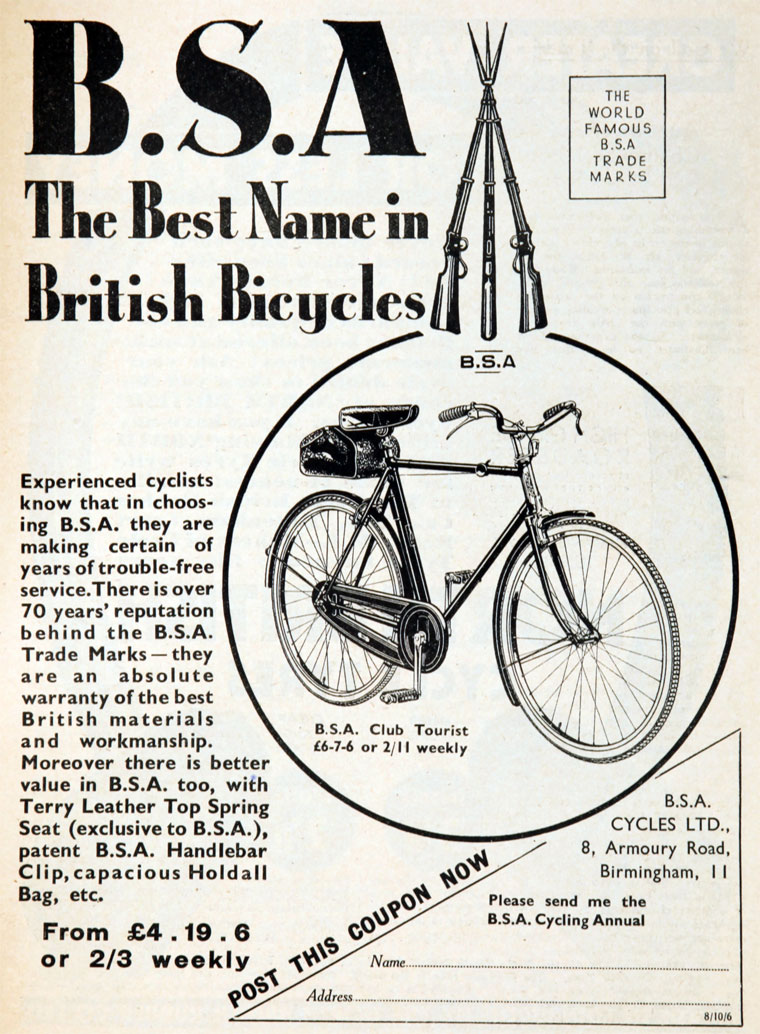 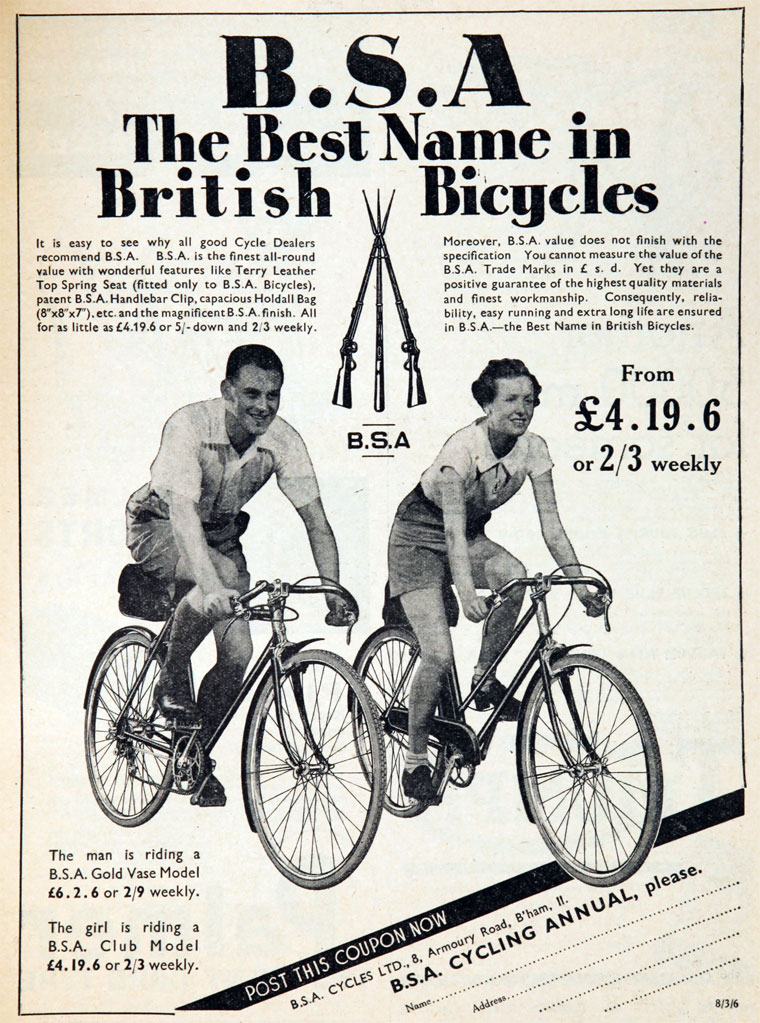 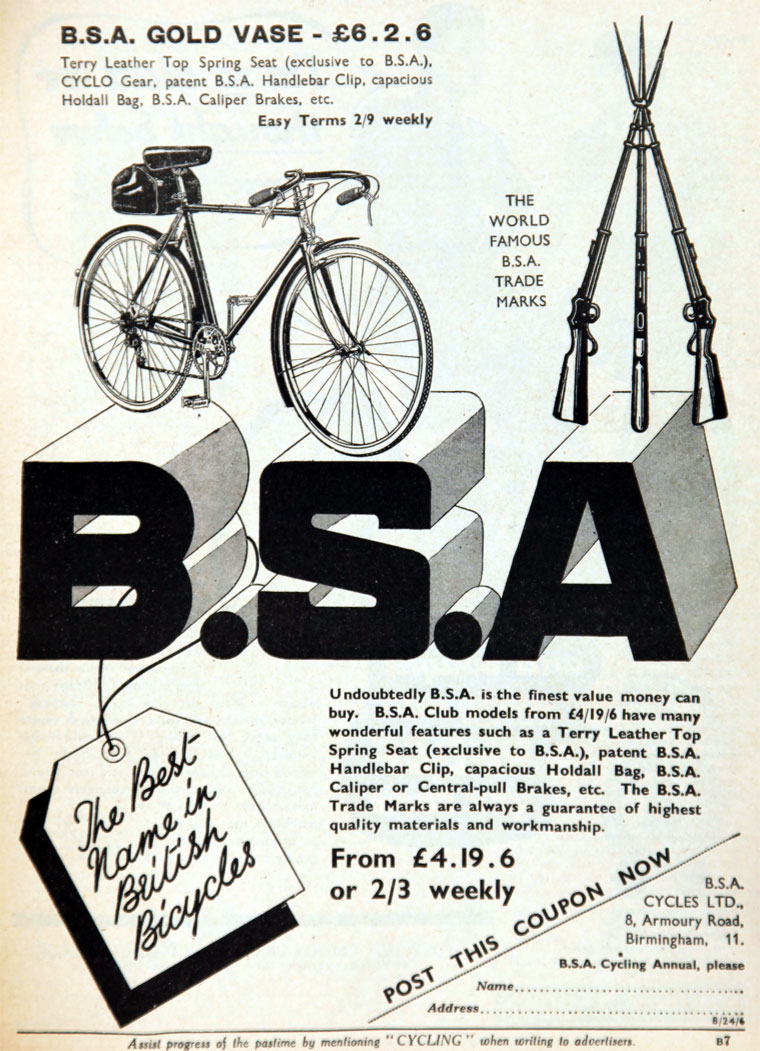 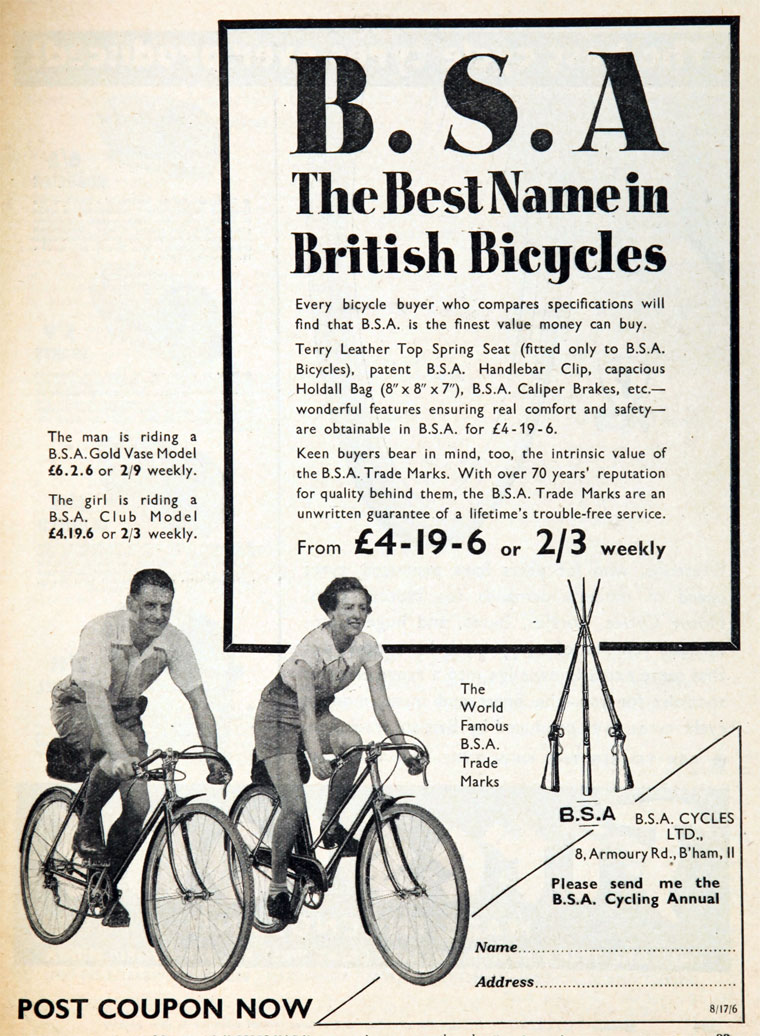 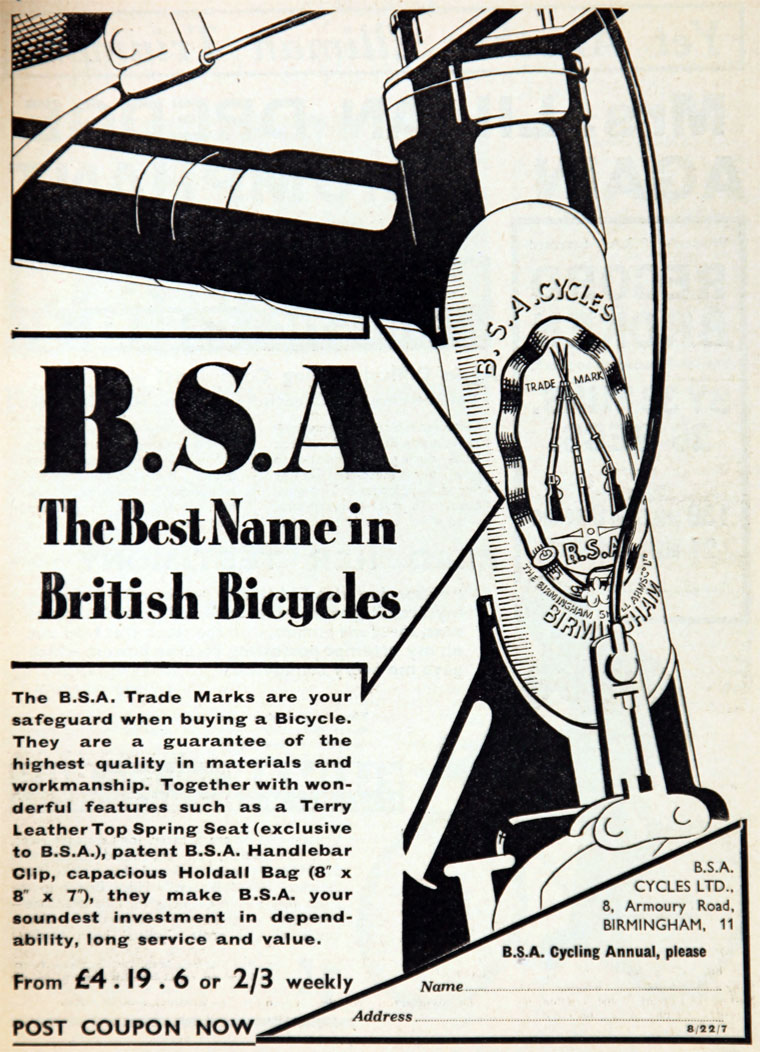 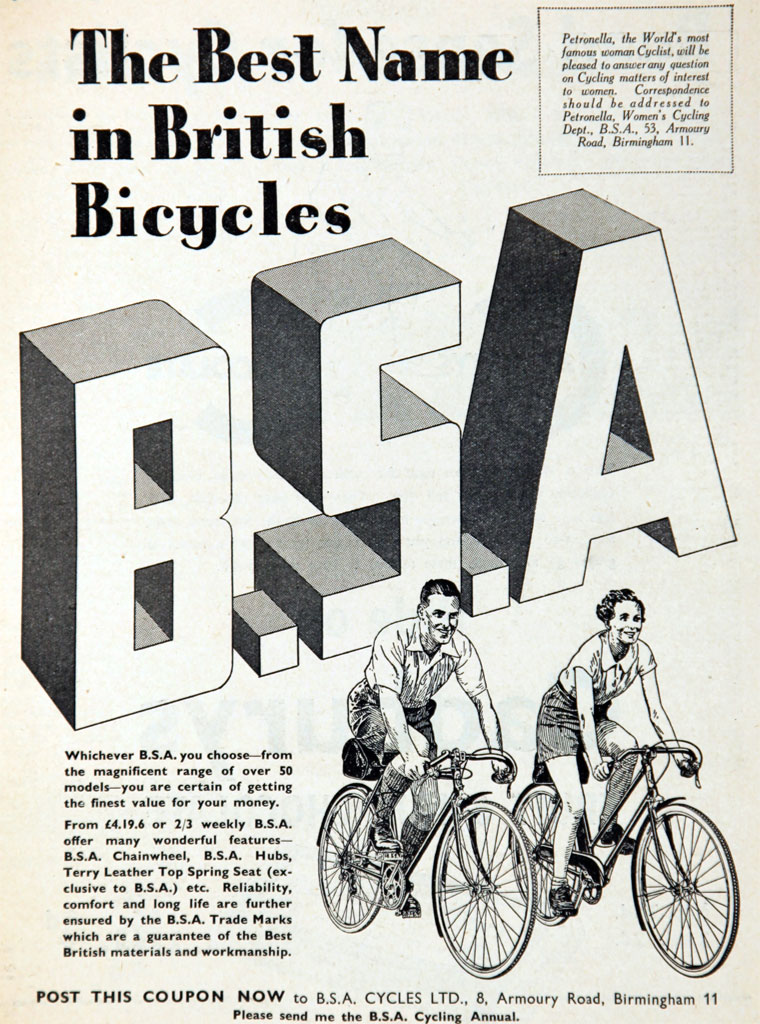 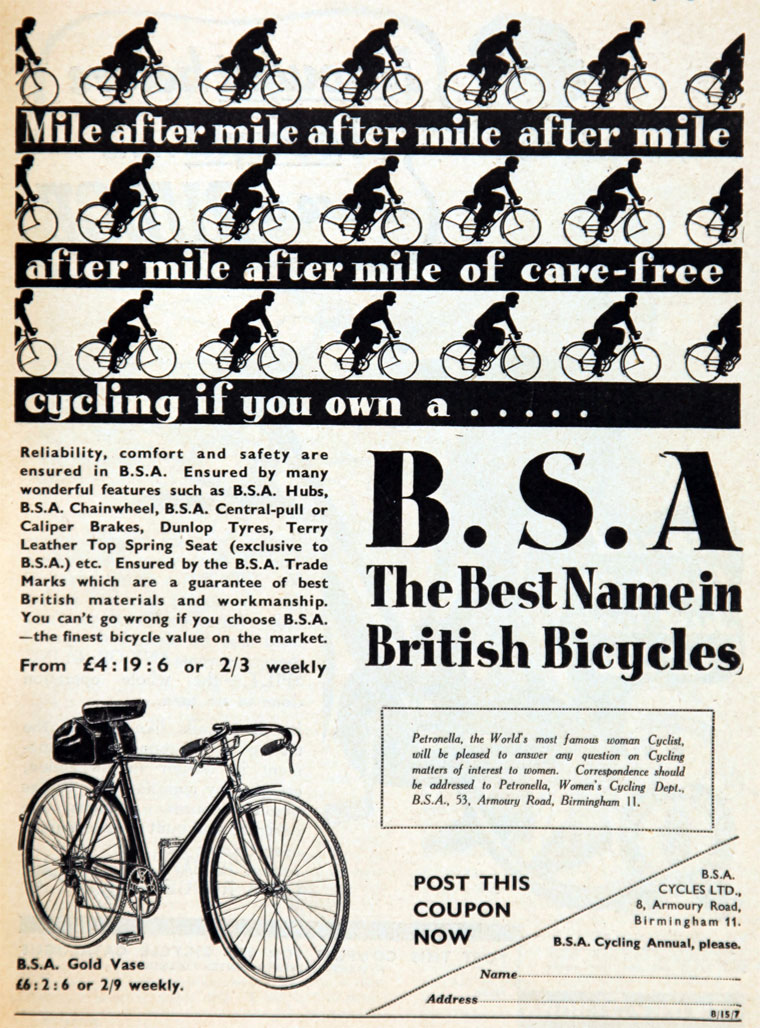 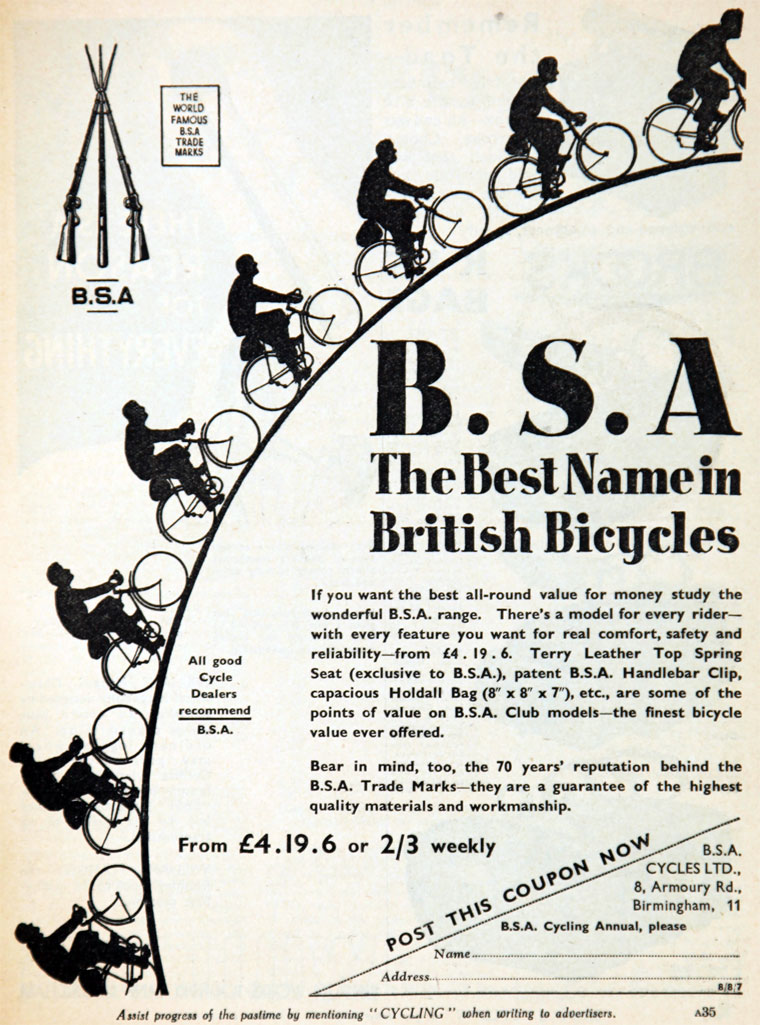 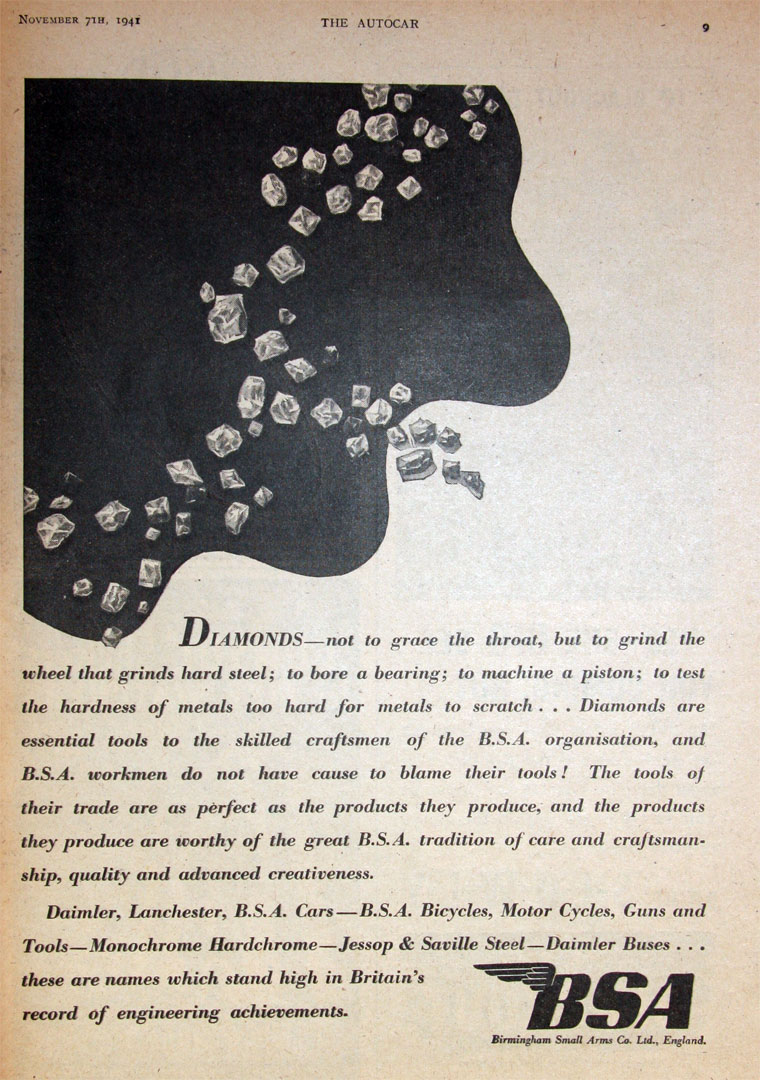 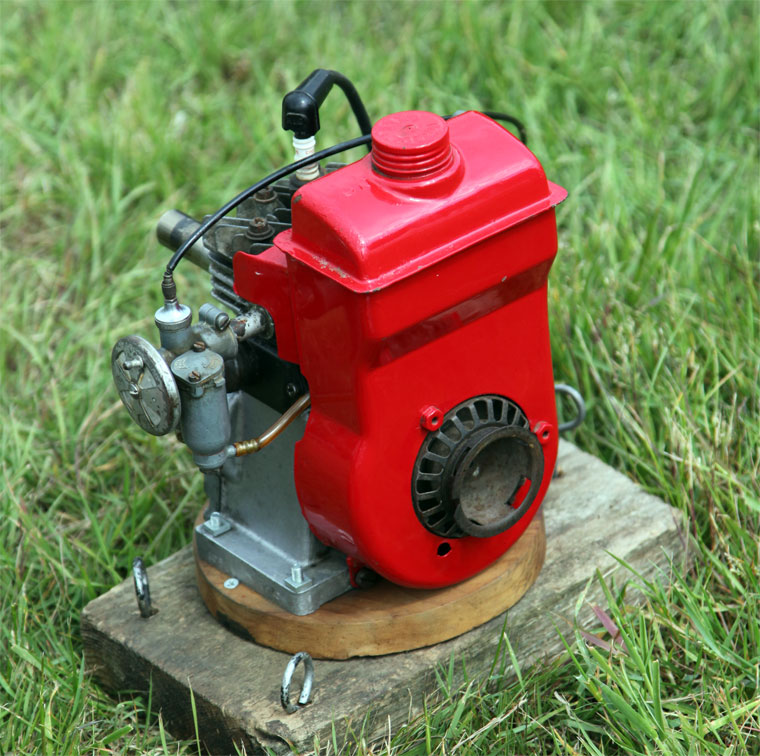 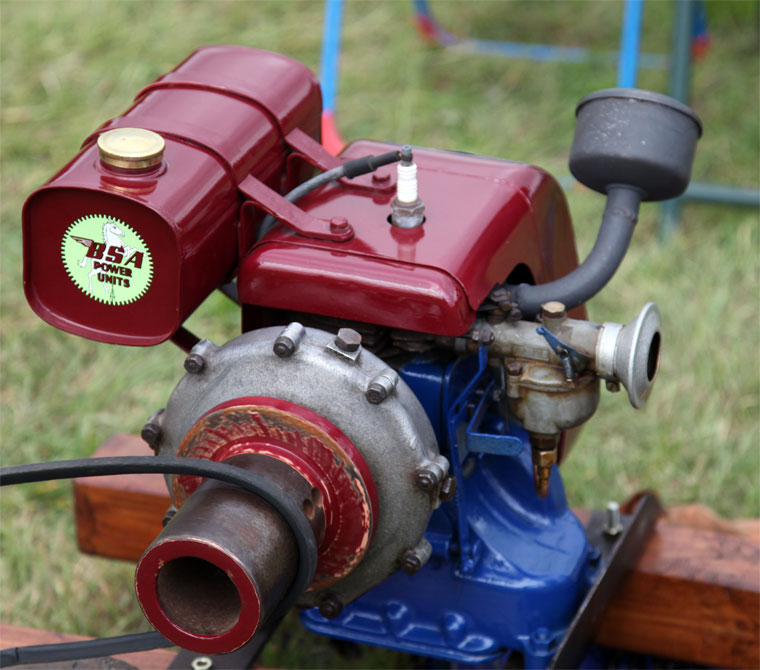 1854 Possibly founded in 1854 as an association of 14 (16? 24?) gunsmiths in order to supply munitions (hand-made muzzle-loading rifles) for the Crimean War effort.

1861 Incorporated as a Limited Company, The Birmingham Small Arms Company, to mass-produce guns. This was a response, by the larger makers of guns in the Birmingham area, to the success of large scale production at Enfield.

Large numbers of machine tools were ordered: gun stock machines from the Ames Mfg Co in the USA, and most of the metalworking machinery from Greenwood and Batley of Leeds. Engines and shafting were from Hick Hargreaves.[1]

1863 Factory opened for the manufacture of small arms by use of machinery.

1871 The government adopted the Martini-Henry Rifle and BSA started producing these from 1874.

1880 The company was approached by Messrs. Smith and Lamb, of Ipswich, with a request to manufacture the Otto Patent Safety Dicycle (not "Bi" cycle) the invention of Mr. E. C. F. Otto. On 2nd July, 1880 a contract was entered into whereby the company undertook to supply 210 'Ottos' at £8 15s. each, less tyres: the first machine was delivered on 20th September, 1880.

The output of B.S.A. safety bicycles and tricycles steadily increased but in 1887 the Government demand for rifles and ammunition was such that the Company temporarily discontinued bicycle and tricycle manufacture.

1893 The Government demand for rifles and ammunition lessened, so the Company once more was able to take up the manufacture of bicycles, initially bicycle components until 1919. Complete all BSA cycles were not manufactured until after WW1 (1919).

In 1896 the entire business of manufacturing ammunition, together with the property used for this purpose at Adderley Park and Streetly, was disposed of to the Directors of the Nobel-Dynamite Trust Limited, who formed a new company to take over the works in question, under the title of the Birmingham Metal and Munitions Co. Henceforward the Small Arms Company reverted to its earlier name, which it has held ever since, namely, The Birmingham Small Arms Company Limited.

1906 Took over the Royal Small Arms Factory at Sparkbrook[3].

1907 Bought Eadie Manufacturing Co. The company was engaged in the manufacture of military and sporting rifles and components. [4]

1908 Recommenced the manufacture of complete cycles

1914 Very busy in all departments; BSA bicycles and motorcycles were very popular - demand expected to exceed previous year; great demand for cycles and motorcycles from all over the world; great demand for the new BSA car; gun department working at full pressure on government orders as well as other types of gun; one of the most important types of gun is the Lewis machine gun for which the company held sole manufacturing rights for Europe[5]

1926 The BSA entered into an agreement with Standard Telephones and Cables - formerly the Western-Electric Co - whereby the developments of the latter company in connection with the broadcast receiving apparatus were to operate for both companies. A new BSA company was formed under the name of BSA Radio Ltd - the company to market the new BSA products. The head offices of BSA Radio was at Small Heath, Birmingham. Mr J. W. Bryan who was the publicity manager, and who was closely connected with the company's sales departments, was in charge of all matters relating to sales of BSA Radio.[6]

1957 Raleigh Industries acquired the BSA Bicycles Ltd subsidiary, which appears to have included New Hudson Cycle Co and Sunbeam Cycle Co and Eadie Manufacturing Co as Raleigh appointed directors to all these companies[8]