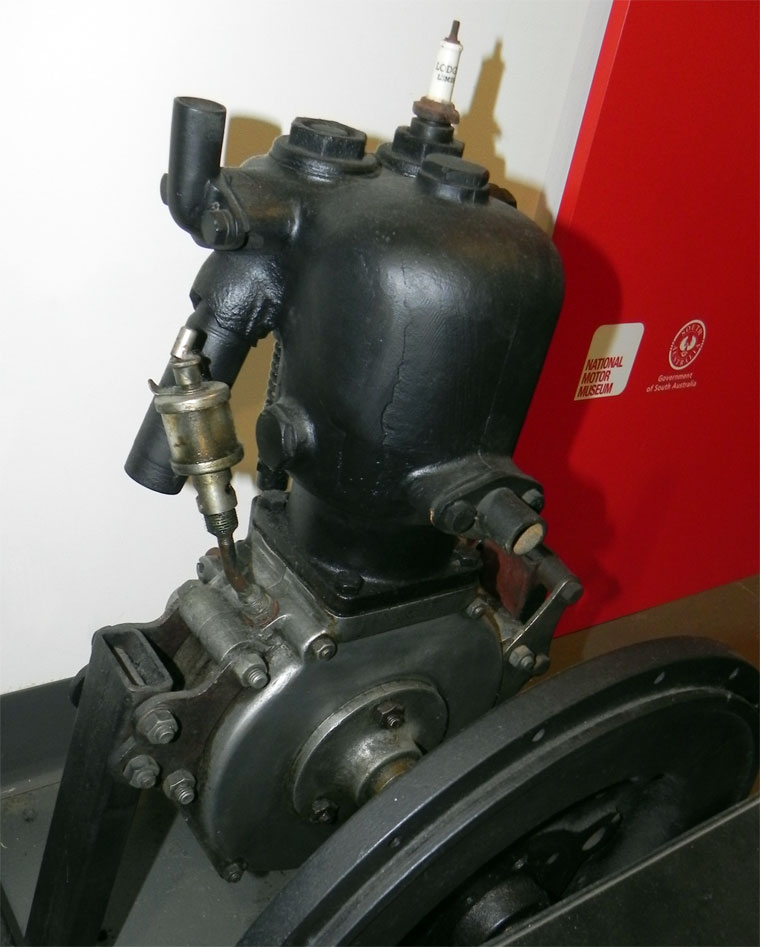 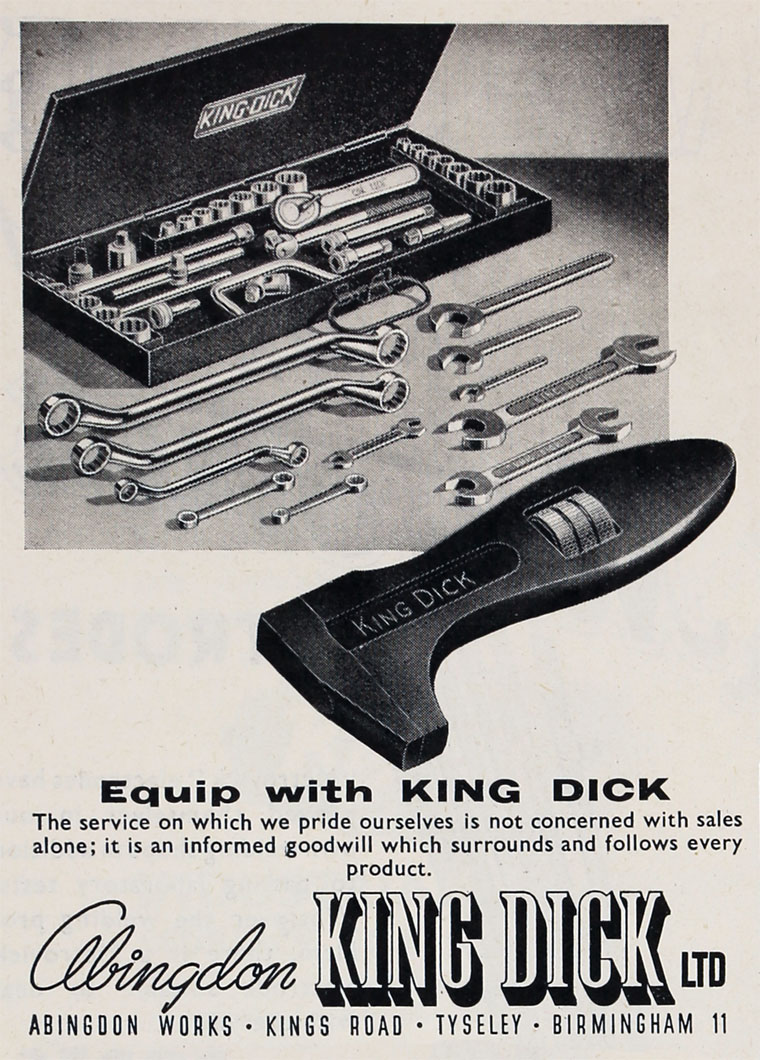 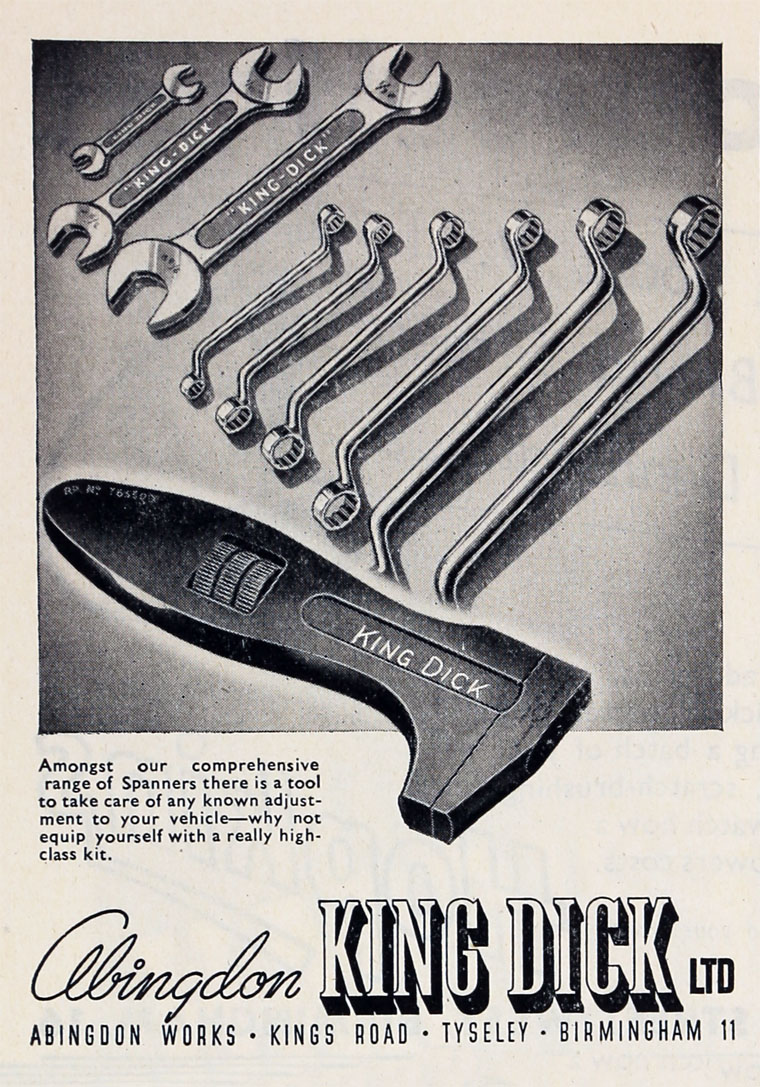 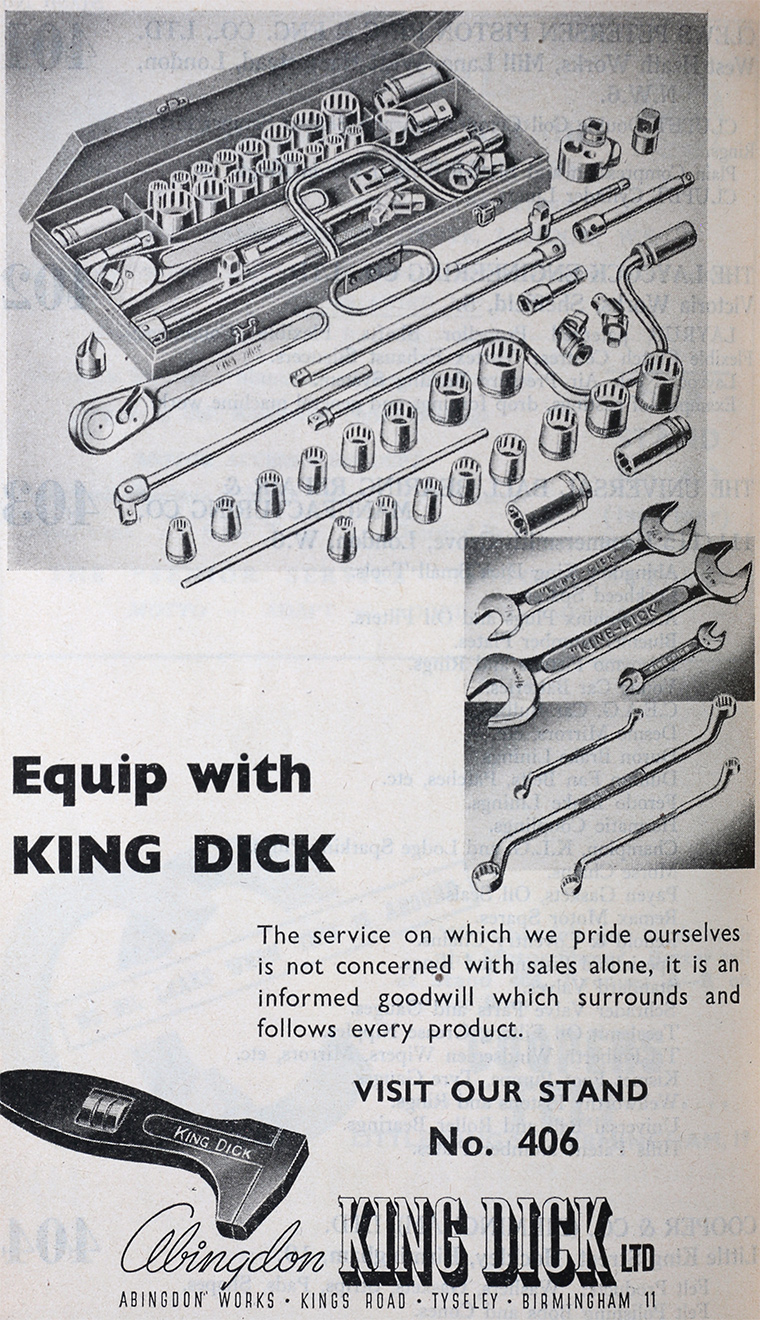 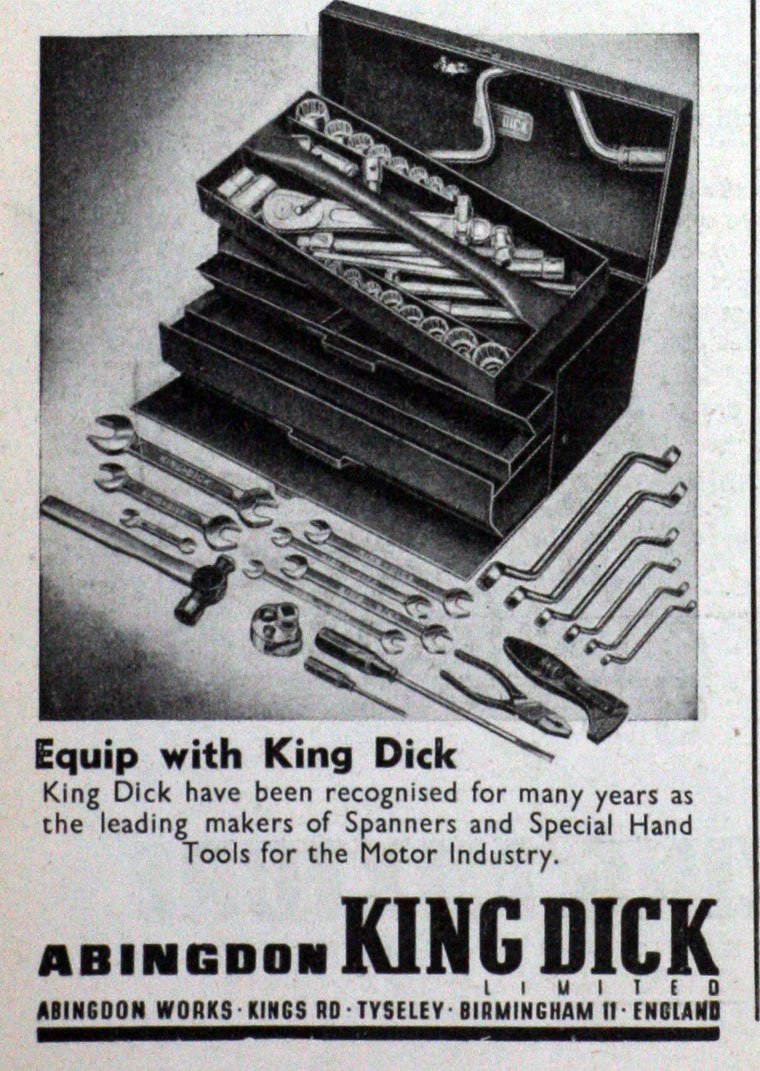 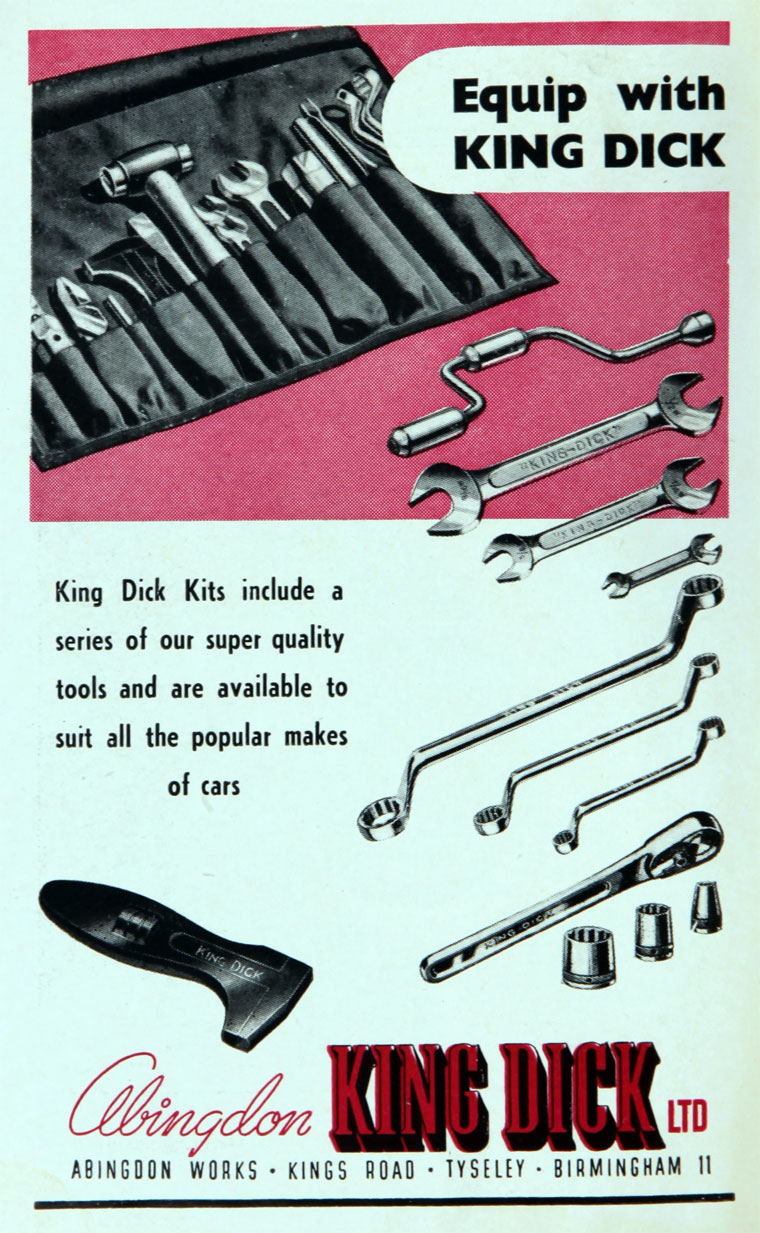 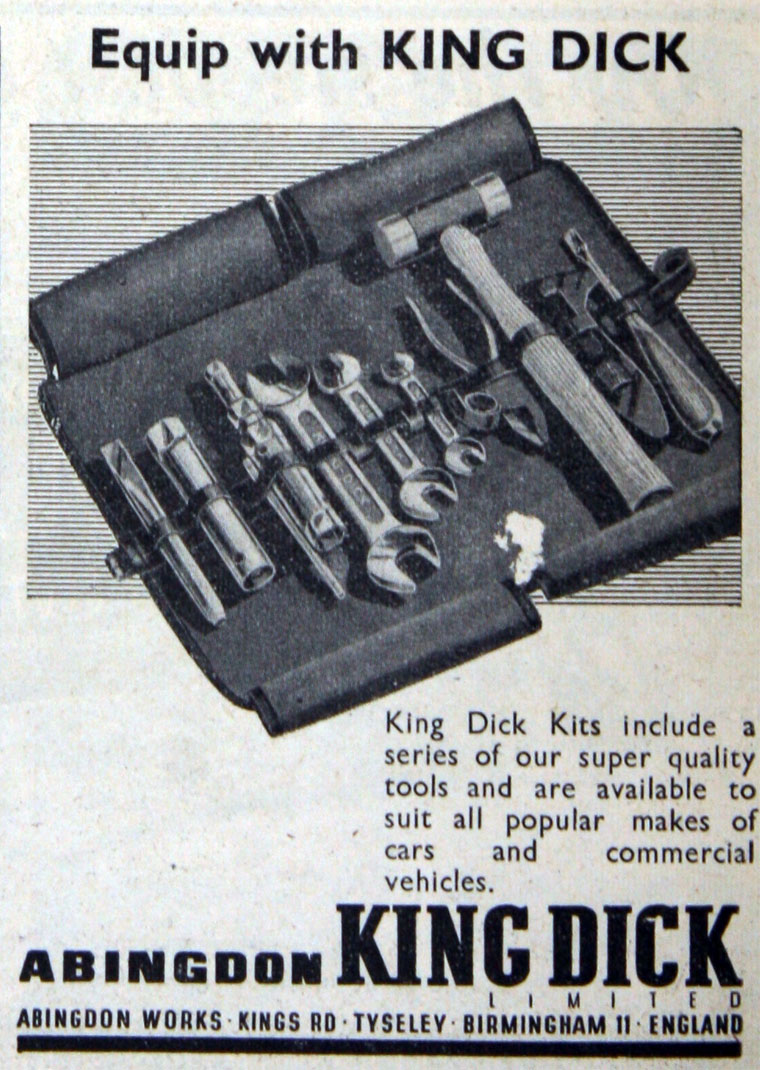 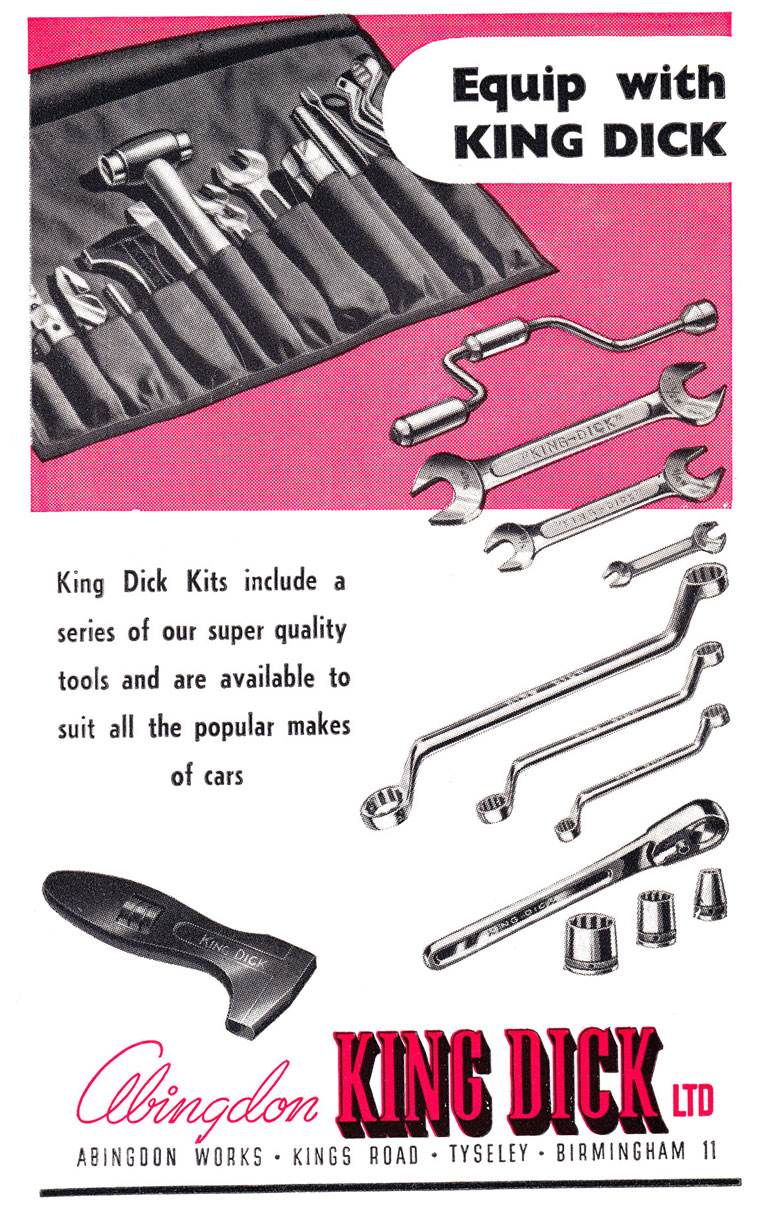 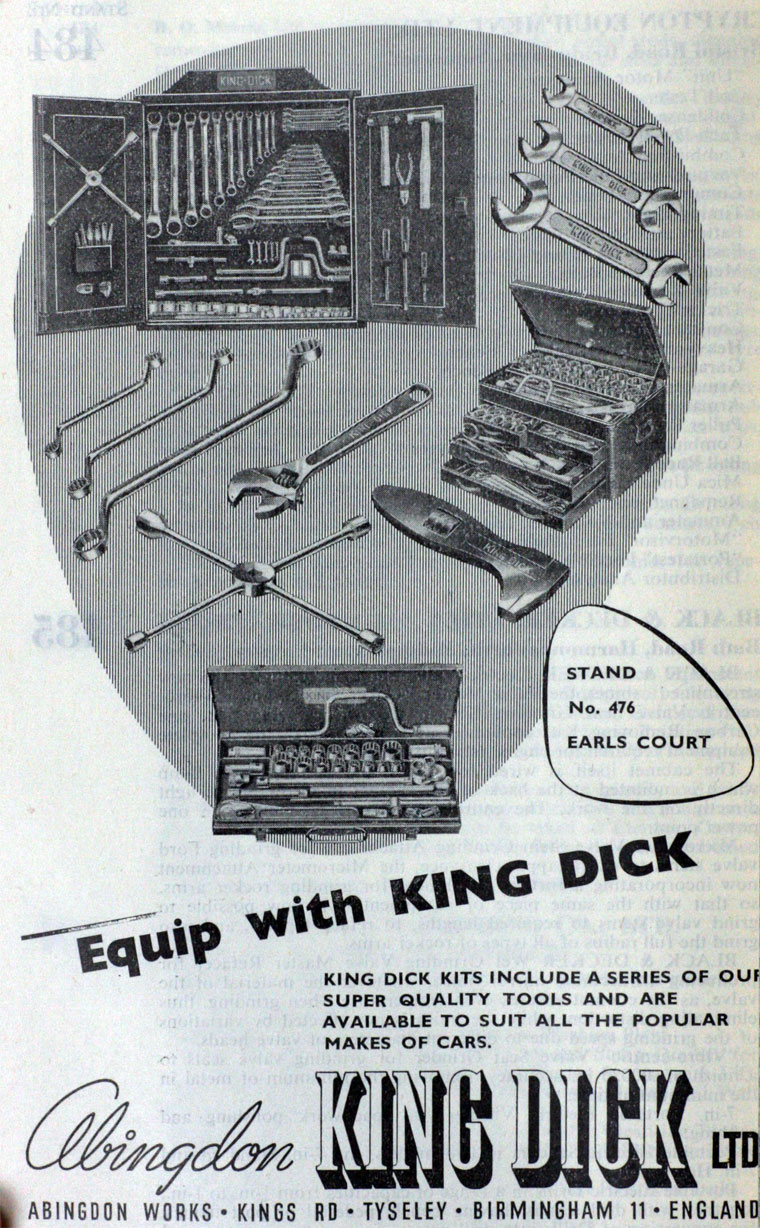 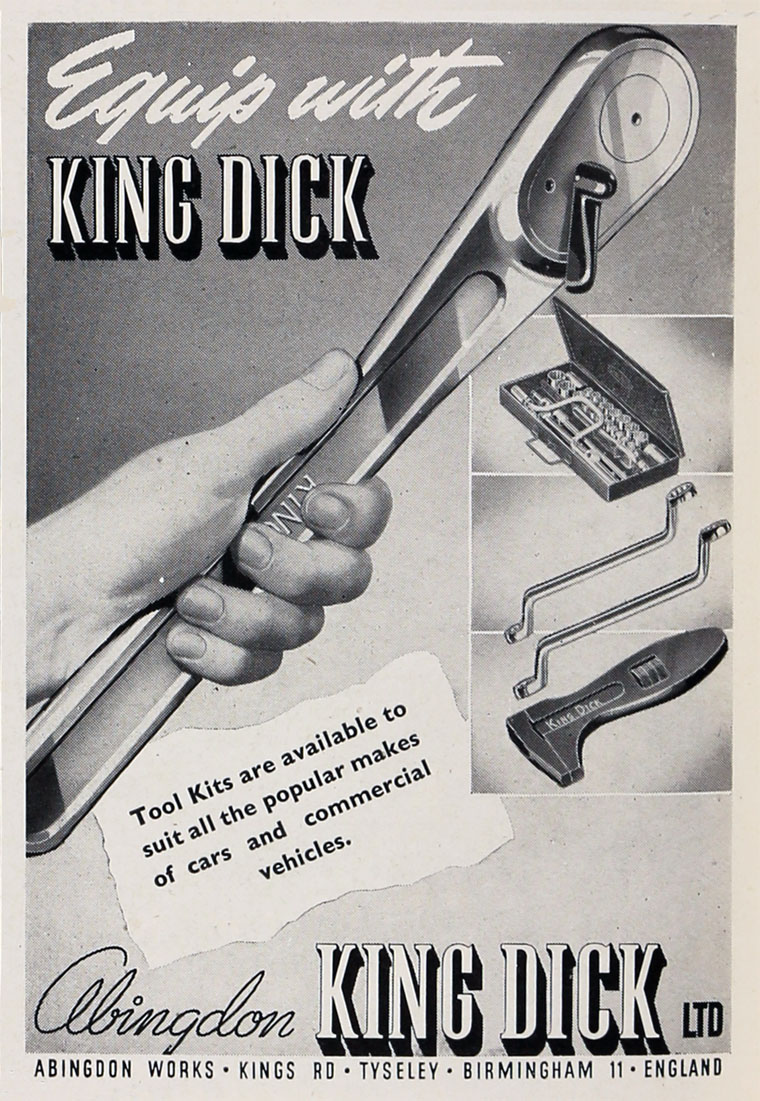 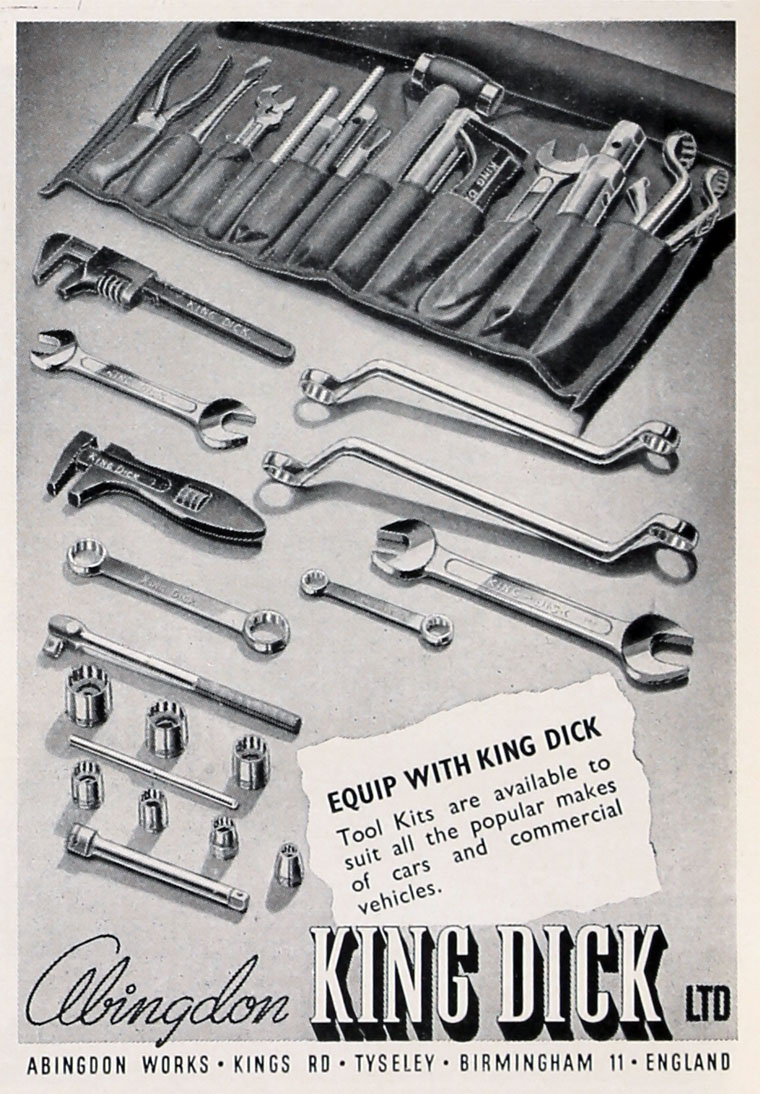 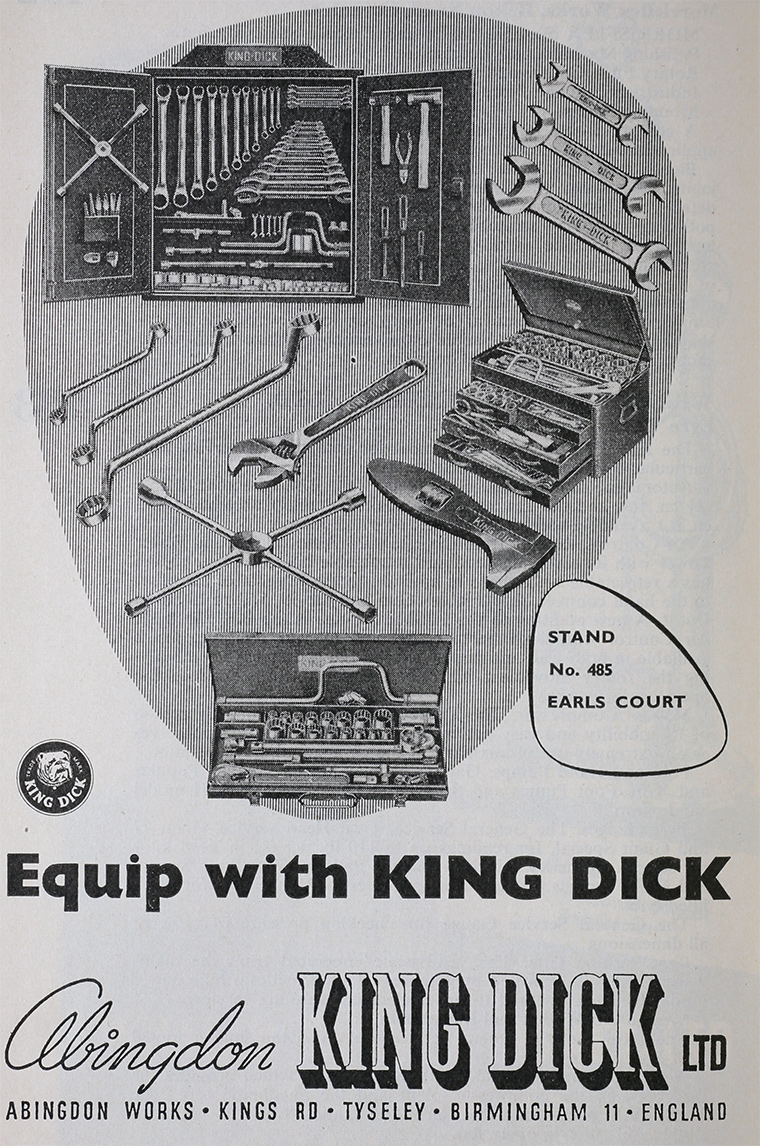 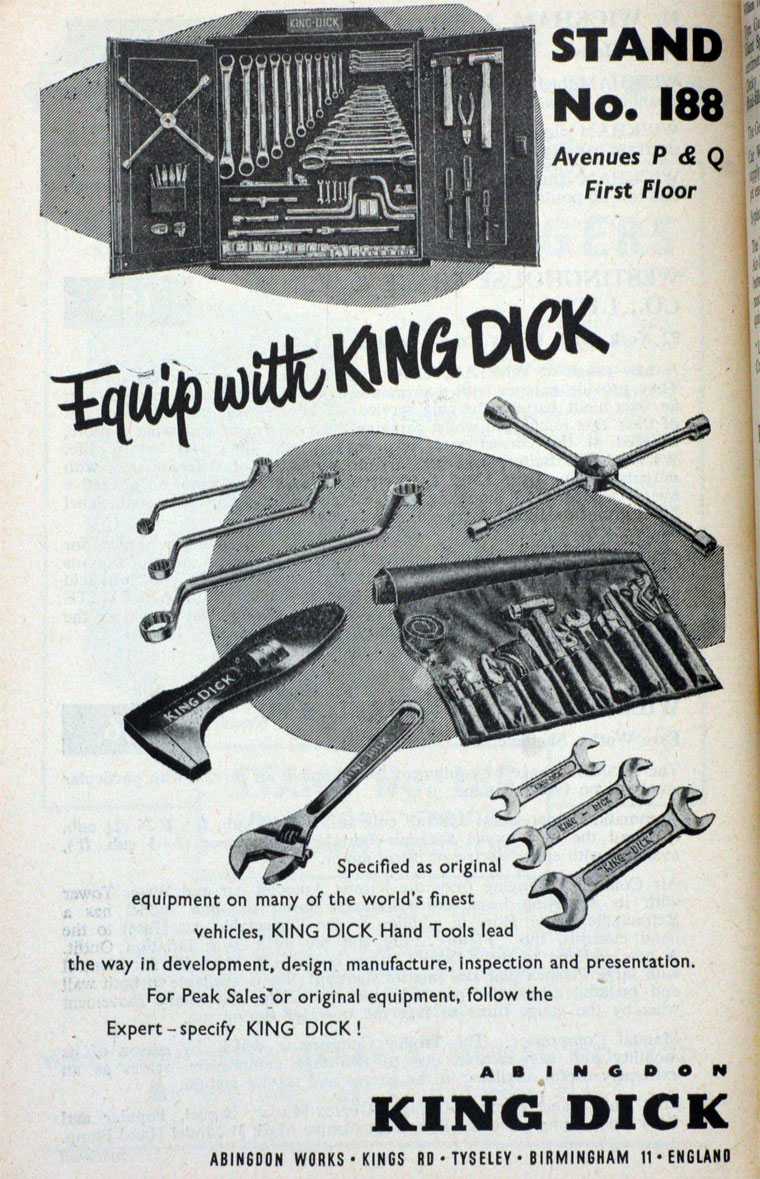 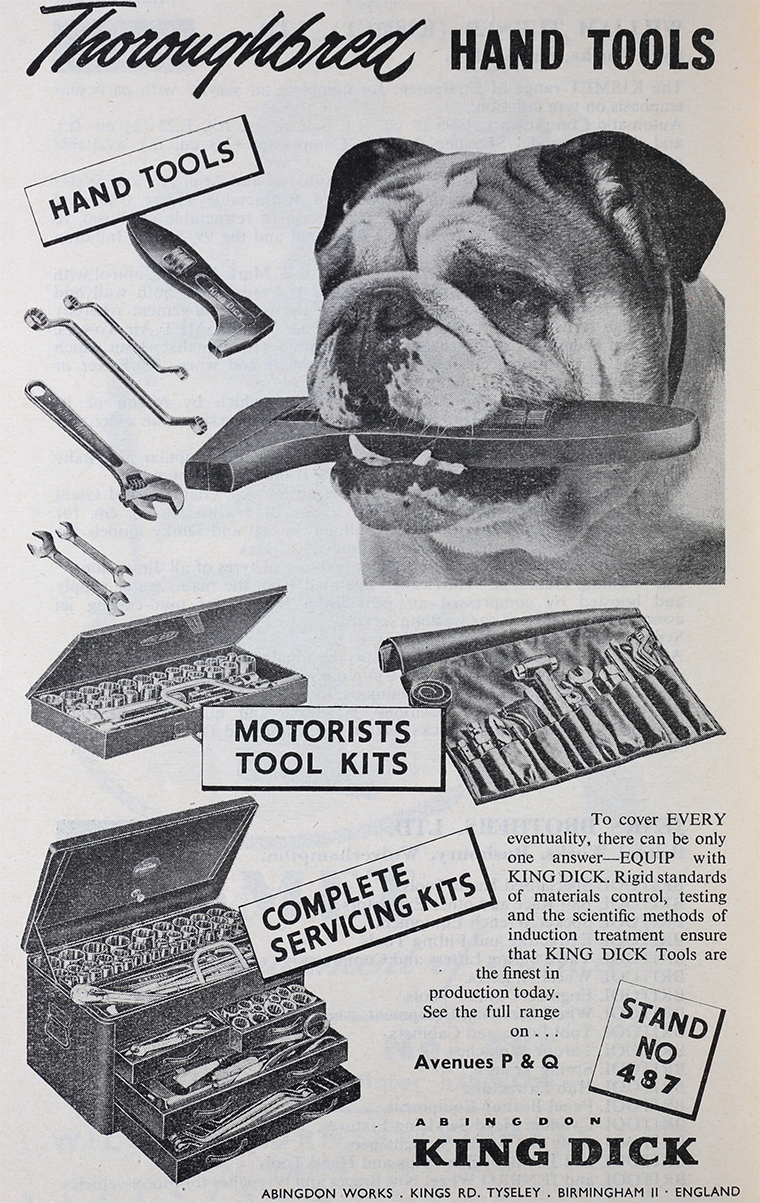 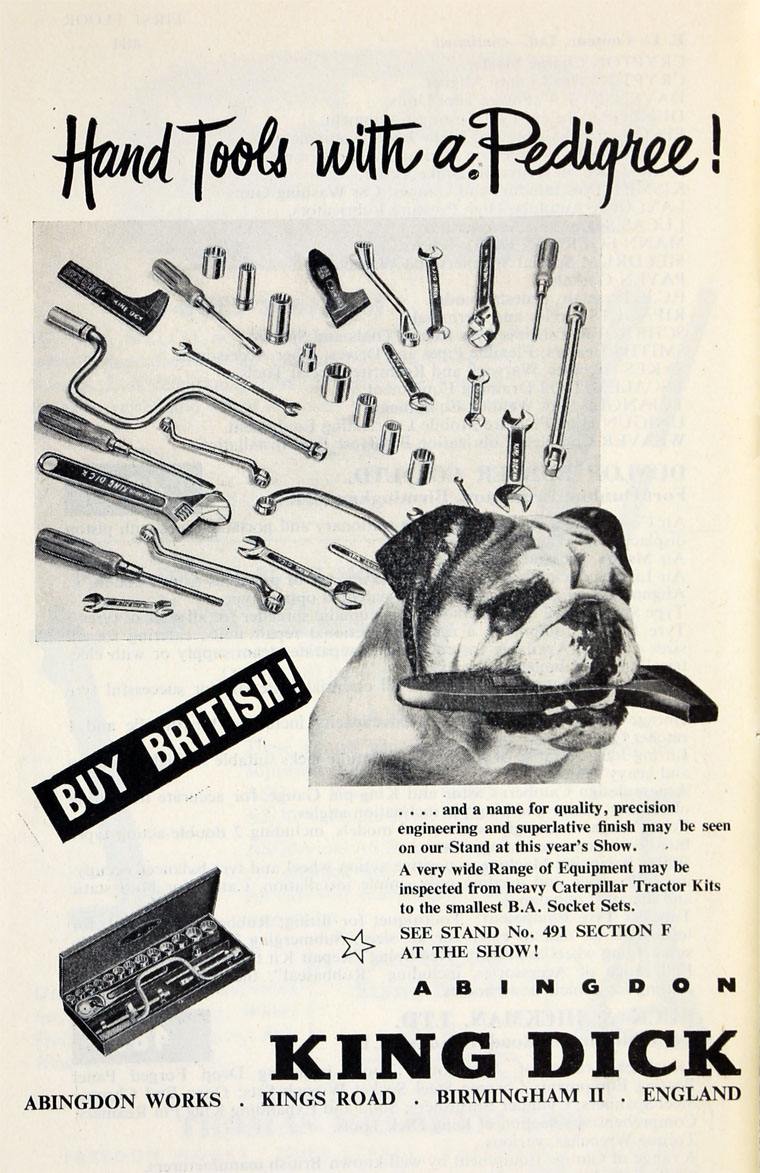 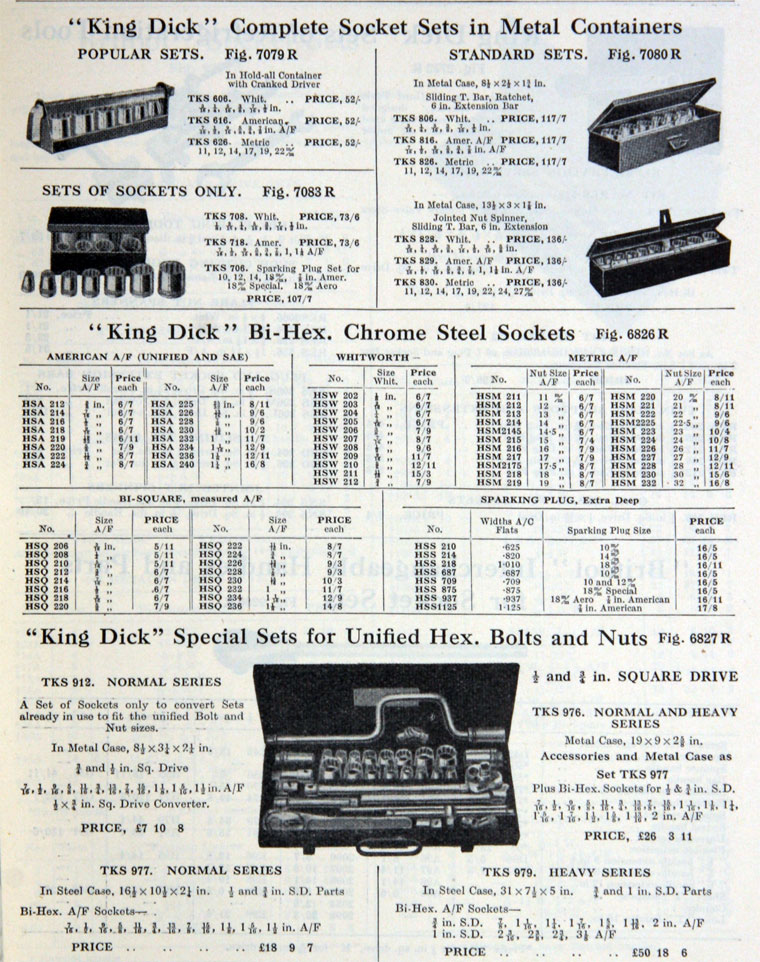 also known as AKD of Tyseley, Birmingham, were makers of tools and also motor engineers.

1908 The company moved to new premises in Kings Road, Tyseley

1926 The company continued to make King Dick Spanners; it was soon known as AKD and also as Abingdon/AKD; they also supplied engines to other manufacturers.

1932 The company continued to make tools but the production of motorcycles ceased.

1905 The company entered the motorcycles market with a machine that had the King Dick name. In those early years they traded as Abingdon-Ecco. Their machines, typical of the era, ranged from 2hp to 3.5hp, with solos and tricycles available. They began to make their own four-stroke 350cc single and 794cc V-twin engines. The company first used proprietary engines, such as Fafnir, Kerry, Minerva and MMC but later built their own singles and V-Twins.

1907 At around this time the company joined with the East London Rubber Co to make Kerry-Abingdon motorcycles for that firm, who bought and sold in preference to manufacturing. This arrangement continued until 1915.

1910 A neat 3.5hp model was produced, soon followed by a 6hp V-twin. Both were belt-driven and had a three-speed rear hub. There were also two large singles of 499cc and 623cc. The company made the engine itself, but later it was supplied to other firms.

1924 The range had been reduced to two singles and a twin.

1925 They changed their name to the initials of AKD. They continued their production from premises at Tyseley, Birmingham.

1925 This was the final year for the Abingdon name. One of the singles was known as the Abingdon King Dick. After that they were known as AKD and continued as such until 1932.

1928 After a gap of a couple of years or so the company returned to production of motorcycles with a six-model range, all using the same 172cc ohv engine driving a three-speed gearbox. The difference in models was made with fixtures and fittings and some engines had twin ports. There was also a super-sports model.

1929 A special model appeared with an ohv 148cc engine built in-unit and a three-speed gearbox. The rockers oscillated against a roller held up against a fixed bridge. Several other models arose from that one and some had a saddle tank.

1930 One model was dropped and two 248cc models were added following the same form.

1931 The model numbers were changed to astrological names, and the 148cc model that had been dropped the previous year made a comeback - this time with an inclined engine.

1932 This was the last year that the company produced motorcycles and after that they focussed on producing hand tools.