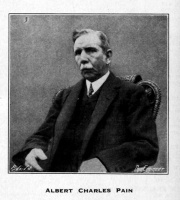 1890 Devised and patented a system for forced lubrication of double acting engines, which was later used extensively in such engines

ALBERT CHARLES PAIN was the inventor of the system of forced lubrication which revolutionized high-speed steam-engine construction and is now universally employed.

For nearly forty-five years he was associated with Messrs. Belliss and Morcom in Birmingham, and during that period he was responsible for the design of their steam-engines and reciprocating compressors totalling over two-and-a-half million horse-power.

He first conceived the idea of forced lubrication whilst third engineer on a screw collier, a position he had secured after serving his apprenticeship with Messrs. Day, Summers and Company. He observed how the flooding of a connecting-rod bearing mitigated a serious knock, and after his association with Mr. Alfred Morcom and Mr. G. E. Belliss, the opportunity occurred to evolve his system of continually forcing oil so as to fill up all the voids in a bearing, resulting in the patents of 1890 and 1892 (Nos. 7,397 and 11,432) being granted for his system of forced lubrication.

From 1878 to 1884, he was a draughtsman at Portsmouth Dockyard, and it was during this time that he first came into contact with the late Mr. Alfred Morcom, who was then also connected with naval work. Mr. Alfred Morcom shortly afterwards entered into partnership with Mr. G. E. Belliss, who had already established a successful business, and Mr. Pain was invited to become chief draughtsman. He accepted, and thus commenced his long association with the firm, which produced such an outstanding contribution to engineering progress.

He became a Member of the Institution in 1910.