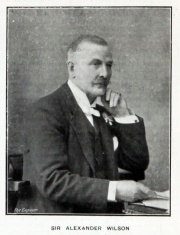 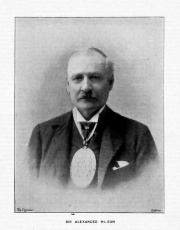 1873 Also a partner in Wilson, Cammell and Co, manufacturer of Bessemer Steel Rails[1]

. . . the death of Sir Alexander Wilson, which took place at Archer House, Sheffield. late on Saturday night, the 27th ult. . . . his eldest brother the late George Wilson . . . at the Cyclops Steel and Ironworks, until he became a partner and one of the leading men of the city

In 1864 the Cyclops firm was converted into a limited company, with George Wilson as managing director, and Mr. Alexander Wilson as his assistant.

The chairman Mr Cammell died in 1879, and Mr George Wilson succeeded to the position retaining that of managing director, both of which he occupied with distinguished ability and great advantage to the company and until his decease in 1885, when his brother was appointed managing director and deputy chairman.

Thomas Vickers of Manchester followed Mr George Wilson in the chairmanship and held the office until November 1887 when Sir Henry Watson of Shirecliffe Hall, Sheffield took up the position.

The son of the late Mr. George Wilson, of Broughty Ferry, he was born at Haughmill, Fifeshire, and received his early education at St. Andrew’s, afterwards proceeding to Edinburgh University.

On leaving the University he entered the Cyclops Works of Messrs. Charles Cammell and Company, of Sheffield, his eldest brother, the late Mr. George Wilson, having become a partner in the firm. In 1857, after passing through the various departments at the Cyclops Works, he was sent out to the United States to represent the firm and his complete success in that mission thoroughly justified his appointment.

Returning in 1859 he took up an important position under his brother.

In 1864 the Cyclops firm was converted into a limited company, with Mr. George Wilson as managing director, and Mr. Alexander Wilson as his assistant.

The chairman, Mr. Cammell, died in 1879, and Mr. George Wilson succeeded to the position, retaining also that of managing director, both of which he occupied with distinguished ability and great advantage to the company until his decease in 1885, when his brother, the subject of this notice, was appointed managing director and deputy chairman, succeeding to the chairmanship in 1889.

In that position, as in all others,he enjoyed to the full the confidence and esteem of his colleagues on the Board, and of the shareholders in the rapidly-growing establishment.

Great regret was felt and expressed when, in the middle of 1901, he was obliged, on medical advice, to give up the onerous duties and heavy responsibility of managing director, Although resigning the control of the great works, Sir Alexander retained the position of chairman, which he held until the close of 1903 on the amalgamation of the business of Charles Cammell and Company with that of Messrs. Laird and Brothers of Birkenhead.

With the great expansion of the business the names of Mr. George Wilson and Sir Alexander Wilson are indissolubly associated. They were both men of exceptional business ability, initiative energy and resourcefulness. When Sir Alexander assumed the managerial control, the firm gave employment to some five hundred persons: at the date of his death the work people exceeded 13,000 in number.

Sir Alexander (then Mr.) Wilson joined the Cutlers’ Company in 1886, and occupied the chair of the guild in the Diamond Jubilee year.

The baronetcy was conferred upon him shortly after the visit of Queen Victoria to the Cyclops Works in the summer of that year.

As Master Cutler Sir Alexander worthily sustained the traditions of the office, discharging its many and varied duties with dignity and ability. He possessed all the qualities which fitted him for his position, and at the close of his year warm testimony was borne to the way in which he had filled the chair of the ancient guild. Although personally he took no active part in public affairs, he followed their trend with the keenest interest. Institutions and movements for the relief of the necessitous, and the welfare of the community found in him and in Lady Wilson ready and generous friends.

Sir Alexander Wilson was a Justice of the Peace for the West Riding of York and the city of Sheffield, and a member of the Institution of Mechanical Engineers and of the Iron and Steel Institute. He was also the Consul in Sheffield for Chili.

He was elected an Associate of The Institution on the 14th April, 1874.

Sir ALEXANDER WILSON, Bart., was born at Haughmill, Fifeshire, on 28th June 1837, and received his education at St. Andrews and Edinburgh Universities.

Following his elder brother George to Sheffield, he became connected with the Cyclops Works of Messrs. Charles Cammell and Co., and in 1857 was sent to the United States to represent the firm in that country.

Two years later he returned to take up a responsible position under his brother, and in 1864, on the firm being converted into a company, George Wilson was appointed managing director, with his brother Alexander as assistant.

On the death of Mr. Charles Cammell in 1879, George Wilson became chairman of the company, and Alexander was appointed managing director and deputy chairman.

Later on he occupied the positions concurrently of managing director and chairman, but in 1901 relinquished the former office.

On the amalgamation in 1903 of the firms of Charles Cammell and Co. and Laird Brothers, of Birkenhead, he retired from the chairmanship of the re-organized company in favour of Mr. J. M. Laird, retaining only a seat on the board of directors.

As Master Cutler in 1897, and managing director of the firm, he was responsible for the arrangements for the visit of Her late Majesty Queen Victoria to the Cyclops Works. Shortly after this visit Her Majesty conferred a baronetcy on him, the first time that a Master Cutler has been so honoured during his term of office.

He took an early interest in the rolling of heavy plates; subsequently, he was responsible for the Wilson compound armour-plate, which, with a backing of iron, had a facing of steel.

He was one of the original members of the Iron and Steel Institute on its foundation in 1869.

His death took place at his residence in Sheffield on 27th April 1907, in his seventieth year, after an illness of some months' duration.

He became a Member of this Institution in 1878.

Sir ALEXANDER WILSON, Bart., died on Saturday, March 28, 1907, at the age of seventy. He was a Scotsman by birth, and the son of Mr. George Wilson, of Broughty Ferry, Forfarshire. After being educated at St. Andrews and the University of Edinburgh he went to the Cyclops works, Sheffield, where his eldest brother, George, was employed by Mr. Charles Cammell, the founder of the firm of Charles Cammell & Company, Limited. When but little over twenty years of age he was appointed representative of the firm in the United States, and in 1860 he returned to Sheffield to take part in the work at headquarters. Armour-plates became a feature of the firm's output, and he was present at the rolling of the first armour-plate made at the works. This plate was only 4i inches thick, but was considered at the time to be a great production.

In 1864 the firm was converted into a limited liability company, and when Mr. Charles Cammell, who was the first chairman of the company, died in 1879 Mr. George Wilson succeeded him on the death of that gentleman in 1885. Mr. Alexander Wilson took the real direction of affairs from that time.

In 1896-7 he was Master Cutler, and again in 1897-8, on the death of Mr. Maurice Rogers during his year of office. In the latter year Queen Victoria paid a visit to Sheffield to open the Town Hall. The Queen viewed the Cyclops Works on that occasion, and took much interest in the rolling of an armour-plate that was to be used in the construction of one of the warships, and a baronetcy was conferred on Mr. Wilson.

At the time of his death he was chairman of directors of his company. He was a member of the Institution of Civil Engineers and of the Institution of Mechanical Engineers. He was one of the original members of the Iron and Steel Institute, and, during the visit to Sheffield in the autumn of 1905, he received and entertained a party of the members at the works.

During the first half of 1907 the iron industry suffered serious losses by the deaths of eminent metallurgical authorities, who, though not members, took a constant interest in the work of the Iron and Steel Institute, and of leaders of science of world-wide fame. The list includes M. Berthelot, D. Mendeleieff, and H. Moissan, the chemists; U. Le Verrier, professor of metallurgy at the Conservatoire National des Arts et Metiers; Hugo Buderus, one of the founders of the Society of German Foundrymen; A. Brand, lecturer on metallurgy at Berlin; H. W. Bakhuis-Roozeboom, who in 1900 read before the Institute a paper on iron and steel from the point of view of the phase-doctrine, and Thomas Andrews, F.R.S., of Wortley, near Sheffield, who was a frequent contributor to discussions, and in 1905 read before the Institute an important paper on the wear of steel rails on bridges.