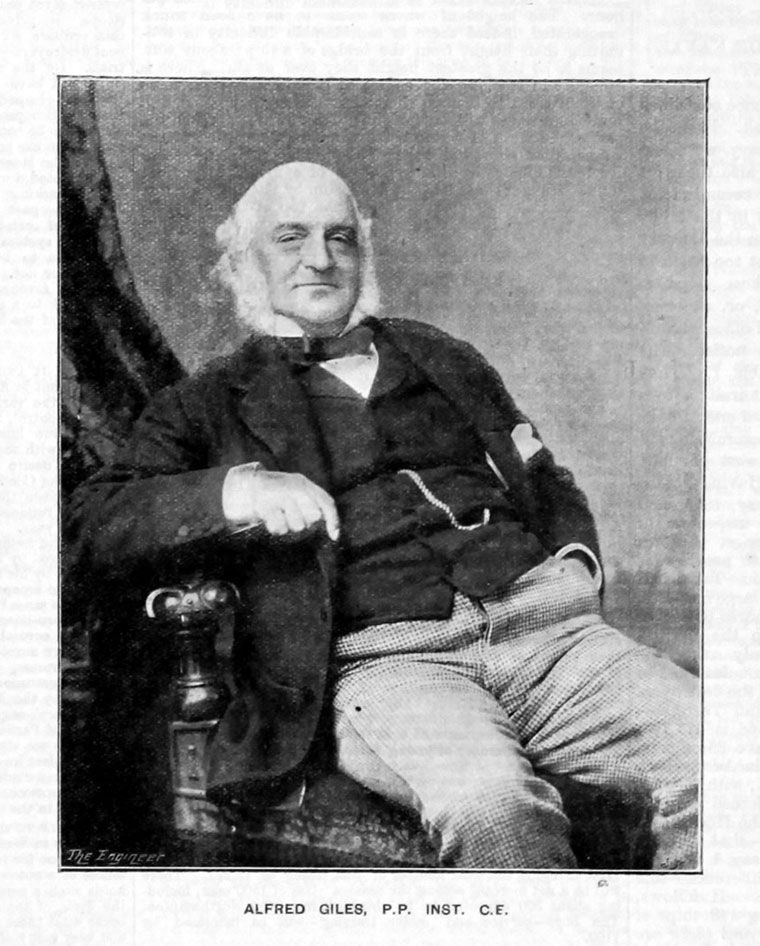 1816 October 3rd. Giles was born in London, the second son of Francis Giles canal builder and railway engineer and his wife Mary Ann Wyer, daughter of Samuel Wyer of Birmingham.

He was educated at Charterhouse School and became a civil engineer, constructing railways and dock works in Britain and overseas. He was consulting Engineer to Southampton Dock Co., chairman of Union Steamship Co. and a director of Commercial Union Fire and Life Assurance Co.

Giles was also created a Knight of the Order of the Dannebrog by King Christian IX of Denmark.

He lived in Godalming in Surrey.

Giles served as president of the Institution of Civil Engineers from May 1893 to May 1894.

ALFRED GILES, son of Francis Giles, a well-known engineer and a Member of Council of the Institution, was born in London in 1816. He was educated at Charterhouse, and after leaving that school studied with a private tutor, with the intention of going to Cambridge.

In early life he desired to become a sculptor and gave signs of artistic skill of considerable merit which afterwards showed itself in his work wherever elegance of design was possible. His father, however, who, although at first a strenuous and frequent opponent of Stephenson, subsequently became a firm supporter and friend of that engineer, was employed upon so much railway work that he was forced to call upon Alfred to assist in the numerous surveys he had then in hand. Thus at the early age of seventeen, after a short training in his father’s office and in the field, Alfred Giles came to be employed in making surveys for the London and Brighton and the London and Southampton Railways. His father was the original engineer of the latter and carried out a considerable part of the line, now the London and South Western Railway main line to Southampton, until the Company got into financial difficulties owing to the impossibility of finding contractors to undertake more than a section of the work at a time. The great railway contracting firms had not yet come into existence, and it often happened that a section in the centre of the line remained uncompleted, owing to the failure of a contractor to carry out the work he had undertaken.

After this Mr. Alfred Giles was employed in surveying and levelling for new lines in all parts of the kingdom, and some of the difficulties encountered by him are well described in his Presidential Address to the Institution.

In 1846 he laid out the Reading and Reigate Railway, and, his father having died in 1847, and his elder brother, Mr. F. G. Giles, having left the profession owing to ill-health, he continued the work and had executed a large part of the line when it was purchased by the South Eastern Railway Company.

In 1857 he was engaged in Italy in surveying the coast-line from Dlarseilles to Spezia, the inland linef rom Genoa to Spezia, and another line from Coire to Dipentes and thence over the Lukmanier Pass to Locarno. This scheme involved great engineering difficulties and was ultimately abandoned in favour of the Nont Cenis tunnel. During that time he became acquainted with and enjoyed the confidence of Count Cavour.

In 1863 he proceeded to lay out and survey the line from Lemberg to Czernowitz in Galicia, the work being finished under his direction and opened in 1866. Several other railways were surveyed and carried out by him, among them being the Neath and Brecon, the SwanseaVale Junction, and lines abroad.

In 1860 he was selected by shareholders in the Great Western Railway Company of Canada to examine that line. He found that there were 4 miles of wooden bridges, involving heavy cost for repairs and at the same time interfering with the traffic, and he recommended the reduction of large spans wherever practicable, so that in case of accident or decay renewal could be easily made.

It was, however, in harbour and dock works that Mr. Giles was more fully engaged. Southampton claimed his greatest care from the year 1838, when assistant to his father, who was engineer to the Dock Company, to which post he succeeded in 1847. Those duties, however, did not entirely take up his time, except when new works were in progress. The several schemes which have made the port so convenient of access at the present time were carried out under his personal direction, with the assistance of his sons, Brydges and George F. L. Giles. From the first Mr. Giles saw the capabilities of Southampton for a great port, and endeavoured to keep pace with the increasing size of ocean-going steamers; but lack of means caused the Dock Company to hesitate to incur the expenditure necessary(for the development of the trade which has taken place since the acquisition of the docks by the London and South Western Railway Company.

The early works at Southampton were described by Mr. Giles in a Paper read before the Institution in 1858, for which he was awarded a Telford Medal. The later works chiefly consisted of a graving-dock, which in its day was the largest in the world, and a deep-water quay, designed in 1874 for the express purpose. of forming one side of a large tidal dock, which was commenced in 1885 and finished and opened by the Queen in 1890. This dock has an area of 18h acres, and is 26 feet deep at low-water spring tides. In this work he was ably assisted by his son, George F. L. Giles, as resident engineer. After nearly fifty-four years' service, as Assistant and Chief Engineer, his connection with the Southampton Docks ceased with their transfer by Act of Parliament to the London and South Western Railway Company in 1892.

The difficulty at Southampton was the want of a good foundation, the subsoil being black clay, or, in reality, river: mud, to a great depth, with occasional quicksand in the bed of an old watercourse. Experience led Mr. Giles to the conclusion that walls more frequently failed from lateral pressure, and he considered that this indicated a general want of weight. Quantity, as well as quality, was necessary. Engineers too often erred, he thought, in not making a wide enough base and in not giving sufficient toe to the walls. Again, trouble, he believed, often arose from unnecessary borings, and where deep bores were needed he made them as far as possible from the difficult part of the work.

Mr. Giles was in the habit of employing concrete to a great extent in dock construction, and as early as 1844 passed it to the bottom of the water by means of a movable trunk. Concrete thus laid was taken up ten years later and found so hard that it was only broken with great difficulty. Again, as to cofferdams, he never put in struts at greater distances apart than from 6 feet to 8 feet; and with a pressure of 25 feet to 30 feet head of water the intervals between the struts never exceeded 6 feet. On the question of dock-gates as against caissons he had a decided preference for the former, finding that they worked with greater certainty and rapidity.

Reference may be made to other harbour works. From the Danish Government, for which Mr. Giles carried out new works, including an opening bridge and a graving-dock at Copenhagen, he received the decoration of knighthood of the Order of Danebrog. The opening bridge presents some interesting features, and in a modified form was adopted at Southampton, where the bridge is formed of two leaves running on wheels. 'By extending the length of each leaf to about 65 feet, when the bridge was rolled back, it housed itself under a vertebrated platform, which, being made to lift on to the bridge by its own action as the bridge was opened, fell back into its place again as the bridge closed.'

This is also characteristic of the Copenhagen bridge. Two dry docks at Blackwall were laid out by Mr. Giles in 1864, and harbour and dock works at Cuxhaven in 1870. The latter were suspended owing to the financial panic of 1873; but the works have since been resumed under German engineers upon his plans and are now nearly completed.

During his long life Mr. Giles was engaged upon a variety of matters beside railway and dock work. For instance, as early as 1852 he constructed a new bridge over the Severn at Upton, his design having obtained the first prize in a competition, and in 1665 a large bridge in Austria. He also carried out Some drainage works at Dunball, in Somersetshire, and extensive reclamation works and sea-banks on the Solent.

He joined the Institution in 1846, served on the Council for many years, and was elected President in 1803. He attended the meetings with great regularity and frequently took part in discussions, being always willing to contribute from his experience to the advancement of the profession and to the assistance of his brethren.

Mr. Giles was connected with the Union Steamship Company for many years, having joined the Board in 1857, and was Chairman for eleven years previous to his resignation shortly before his death. He saw the fleet increase from five small ships to the present twenty splendid vessels headed by the 'Scot' and the 'Norman.' His experience of harbour and dock accommodation and the requirements of ocean-going ships enabled him to confer a great benefit upon Southampton and the Company alike by successfully opposing the removal of the Company’s headquarters to London. While he was always ready to admit that he owed much to Southampton, that town and its trade are deeply indebted to him.

In 1878 Mr. Giles was elected, on the death of Mr. Russell Gurney, to represent Southampton in Parliament, only to be rejected at the General Election of 1880; but it is worth recording that he was permitted, upon the elevation of Mr. Butt, Q.C., to the Bench, to represent the town again without opposition. He subsequently sat until 1892, when he was defeated, having consented to stand again only a short time before the day of election. He seldom spoke in the House of Commons, and then chiefly upon questions with which he was professionally familiar, when, as might be expected, his opinions were listened to with attention. As a, witness before Parliamentary Committees his clear good sense and careful attention to detail made him particularly difficult to crossexamine successfully and caused his opinion to carry great weight. Among the projects supported by him may be mentioned the Preston Docks, the Alexandra Dock at Hull, the Bute Docks and the Manchester Ship Canal.

Regarded with affection by his family and friends, Mr. Giles had the gift of arousing in those closely connected with him an attachment amounting almost to devotion, and even by those towards whom he was compelled to act with severity he was looked upon as a kind and just master. He married in 1838 Jane, the younger daughter of John Coppard, of Hayward’s Heath and Hastings, and leaves a large family of daughters and sons. Amongst the latter are Mr. C. T. Giles, M.P., and Mr. George F. L. Giles, Engineer to the Belfast Harbour Commission.

Towards the end of 1894 Mr. Giles, in performing a service for a friend, caught a cold, which turned to jaundice, and, influenza supervening after a few weeks, he gradually sank and died on the 3rd of March, 1895, displaying to the last the patience and courage which had characterized his life.