Grace's Guide is the leading source of historical information on industry and manufacturing in Britain. This web publication contains 138,125 pages of information and 223,035 images on early companies, their products and the people who designed and built them. 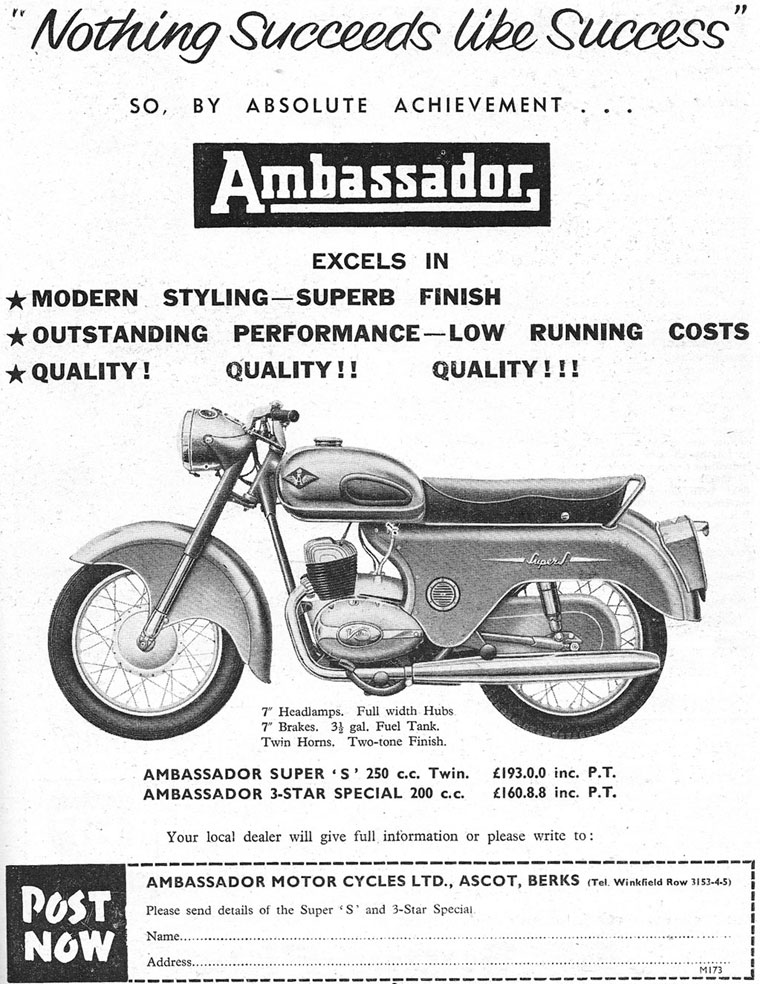 Ambassador of Ascot were motorcycles were produced from 1946 to 1964.

1946 The company was founded by an ex-Brooklands driver named Kaye Don.

1949 The Series 3 Ambassador appeared and the engine was changed to an improved and more modern 6E version.

1950 Another version appeared, this time with Embassy telesescopic forks. The Popular 197cc appeared, as did the Series 5 Ambassador, with cantilever tele-forks (earlier models had Webb forks, later models conventional teledraulic).

1952 Saw the arrival of the Supreme with plunger rear suspension.

1953 The Self Starter was added to the range. It had a Lucas starter motor tucked under the front of the tank, with belt drive to the engine. There was also the Sidecar model. That year the whole rang changed to the 8E engine.

1954 The Supreme had a new plunger-frame and a 224cc Villiers single-cylinder engine with a four-speed gearbox.

1955-1961 Various modifications and changes were made to the range, including some replacements. The Supreme acquired a twin-cylinder 250cc engine in 1956.

1962 For a short while a scooter with a 50cc Villiers engine appeared. Kaye Don retired that year and the company was bought by DMW

1964 A 197cc 3 Star model appeared, with four-speed 9E Villiers and fibreglass rear enclosure. This was the last model that bore the Ambassador badge before production ceased.