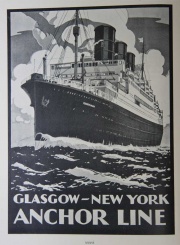 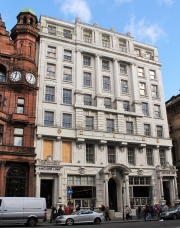 1838 Brothers Nicol and Robert Handyside entered business in Glasgow as shipbrokers and merchants under the name of N and R Handyside & Co. They initially specialised in the Balkan and Russian trade

1850 They also became managers of the Glasgow and Lisbon Steam Packet Co.

1852 They started using the name Anchor Line in their advertisements. They recruited Captain Thomas Henderson to develop intercontinental brokerage business. Thomas Henderson was the son of a ship’s captain from Pittenweem in Fife.

1855 Henderson proposed a steamship service from the Clyde to America; a partnership Handysides and Henderson was formed.

1859 Alexander Stephen and Sons's Kelvinhaugh yard built the steamers, Cora Linn and Ailsa Craig, for Messrs. Handyside and Henderson. These were not ocean-going vessels

When the two Handyside brothers retired, their places in the partnership were taken by Thomas Henderson and his brothers and the firm was renamed Henderson Brothers. John Henderson assisted Thomas in the management of the shipping services; David and William later took over the Clydeside shipyard and engine builders, D. and W. Henderson.

1872 in partnership with the Duke of Devonshire, the Barrow Steamship Co was formed; ships were transferred between the two companies; D & W Henderson also assisted the Duke’s Barrow Shipbuilding Co in the design of their first ships.

1873 Stephens built the Ethiopia, one of the largest vessels of her time, "long, lean and fast".

1874 David and William took over the Clydeside shipyard and engine builders, D. and W. Henderson; they began shipbuilding at Meadowside, Partick. The Anchor Line sourced its vessels from Meadowside.

1892 John Henderson died, followed by David in 1893 and both Thomas and William in 1895. Without the brothers leadership the company began to stagnate and drift.

1912 A joint cargo service from the UK to India with Brocklebank Line was started under the name Anchor-Brocklebank.

1916 the Anchor-Donaldson Line was created to run services to Canada, owned equally by Donaldson Brothers Ltd and Anchor Line (Henderson Brothers) Ltd, which was a Cunard subsidiary.

Post-War: the California and Caledonia, of 17,000 tons each, were the final vessels built for the Line by Stephens.

After 1921 the transatlantic trade suffered from US restrictions

1935 Runciman (London) Ltd set up a new company called Anchor Line (1935) Ltd to take over the fleet and services, except those of Anchor-Donaldson and Anchor-Brocklebank, both of which ceased to exist. Philip Runciman became chairman.

1965 After Tate and Lyle took over United Molasses Co, it sold Anchor Line to Runciman’s Moor Line Ltd, of Newcastle.