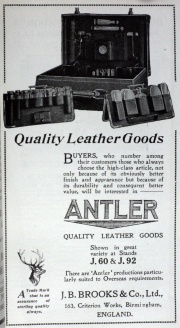 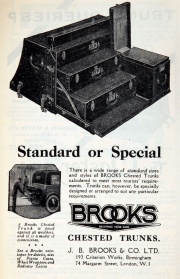 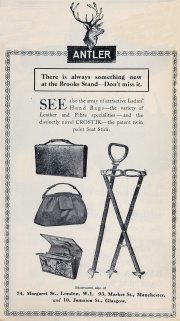 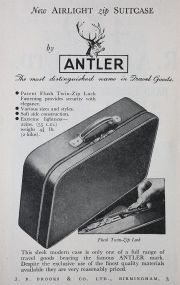 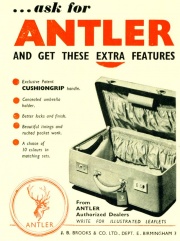 Antler brand luggage was made by J. B. Brooks and Co in Birmingham.

1920 The son of J. B. Brooks introduced luggage to his father's company, with leather covered wardrobe trunks for ocean liners, and, as the automobile grew in popularity, with 'motor trunks' which were strapped to the back of a car. He was keenly interested in wildlife, hence the stag's head and the brand name Antler.

1930 Another major milestone when Antler launched the first ever lightweight, soft-top suitcase, covered either in patent leather or the then extremely innovatory Rexine coated cotton fabric. It was another success and legend has it that a leading London store bought up the whole of the first consignment, which sold in a day.

1950s and 1960s As the Travel Industry expanded and the start of mass tourism began, Antler was at the forefront with technical innovations in Holiday Luggage to meet the demands of customers for products suitable for the new age of air travel.

1962 J B Brooks, having disposed of its cycle-related businesses, was acquired by Harris and Sheldon, shop fitting specialists

1962 The Antler company relocated, under the new ownership of the Harris and Sheldon Group, from the original Midlands base, to the current head office site in North Manchester, with additional manufacturing sites in Mosley, Littleborough and Exeter meeting the ever growing demand.

1980s Changes in soft luggage from the earlier PVC based products to the much stronger polyester type.

1989 After a period on the USM, Antler was acquired by Wassall plc[7]

1990s The company entered into the hard luggage and suitcase market with ever increasing success and the introduction of leather goods extended the brand further. Antler led the field with technological design revolutions with rollercase luggage.