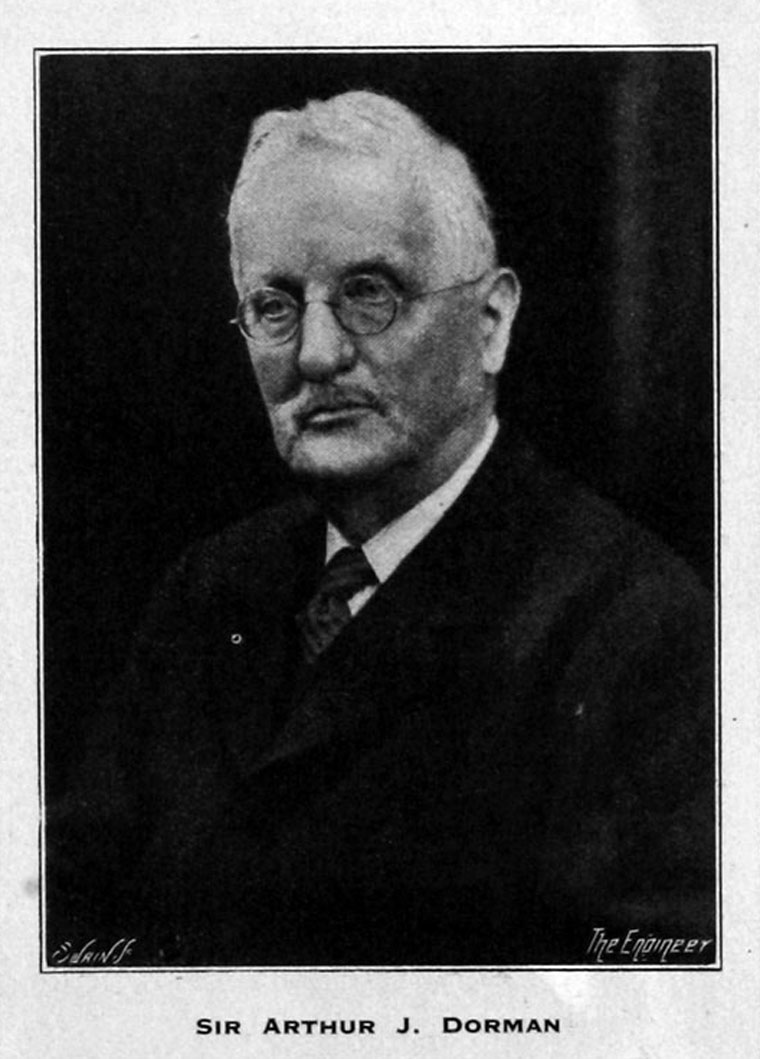 1848 Born at Ashford, Kent, on 8 August, the son of Charles Dorman, a currier who later became a coal and timber merchant, and his wife, Emma Cage.

c.1866 Spent a short period in Paris before beginning, at the age of 18, an apprenticeship to an iron manufacturer in Stockton-on-Tees.

By 1873 he had become a metal broker, and in that year he married Clara, daughter of George Lockwood, a local merchant and shipbuilder. They had four sons and three daughters.

1876 Launched a partnership with Albert de Lande Long by taking over an existing plant, the West Marsh ironworks, Middlesbrough, which was the basis for Dorman, Long and Co.

By 1914 had expanded further both by vertical integration and merging with other companies, achieving a dominant position in the North-East industry.

Dorman was the key decision maker in the company; he showed optimism, daring, a great capacity for hard work, and a keen interest in technical improvements but failed to integrate the acquistions fully. Like many of the elderly managers in the company, he was reluctant to delegate authority and even more reluctant to retire.

1929 The company was over-capitalized and burdened with debts; Dorman sought refuge in another merger with an equally ailing neighbour, Bolckow Vaughan. In the depression this move failed to turn around the company's fortunes.

1931 Only after Dorman's death were the necessary managerial reforms introduced. He died on 12 February 1931 at home near Middlesbrough.

His son Arthur Dorman took over as managing director of Dorman, Long and Co.

He was born at Ashford, Kent, on August 8, 1848, and received his education at Christ's Hospital when the school was still in Newgate Street, London.

At about eighteen years of age he was apprenticed to Mr. C. G. Johnson, one of the principals of Richard Johnson & Co., ironmasters, of South Stockton, and remained with the company for ten years.

In 1866 he entered into partnership with Mr. Albert de Lande Long, and founded the firm of Dorman, Long & Co. The West Marsh and Britannia Ironworks were acquired and the manufacture of rolled joists and other sections was commenced; in 1899 the annual output had risen to over 100,000 tons. In the following year a yard for the building of bridges and other constructional steelwork was laid down alongside the steelworks.

About ten years later Bell Brothers, Ltd., became associated with the firm and the subsequent successful large-scale production of open-hearth steel from Cleveland ore led to further extensive developments. In 1903 the company acquired a controlling interest in the North-Eastern Steel Co., Ltd., which specialised in the manufacture of steel rails.

Later, a corrugated-iron sheet works and a wire works were purchased, and about 1915, the colliery and blast-furnace undertakings of the Carlton Iron Co. and Sir B. Samuelson & Co., and the steelworks and blast-furnaces of the Acklam Iron Co. were absorbed.

The Redcar Steelworks were built in 1916 by the firm's own constructional department for the supply of munitions. A fusion of interests between Dorman, Long & Co., Ltd., and Bolckow, Vaughan & Co., Ltd., was arranged in 1929.

The company built a number of bridges abroad; Sir Arthur had been present at the laying of the foundation stone of the Sydney Harbour Bridge in 1924, and he had hoped to be present also, with his co-director, Sir Hugh Bell, at the opening ceremony. It is a tragic coincidence that neither lived to see the completion of that bridge, one of the firm's many great achievements.

In recognition of the services of his firm during the War, Sir Arthur was made a K.B.E. in 1918, and in 1923 he was created a baronet.

He joined the Iron and Steel Institute in 1874.

The death of Sir Arthur Dorman, which occurred on February 12, at his home, Grey Towers, Nunthorpe, North Yorkshire, removes a well-known figure from Tees-side industrial circles. For many years chairman of Messrs. Dorman, Long and Company, Limited, and a director of several metallurgical and colliery companies, Arthur John Dorman was born at Ashford, Kent, on August 8, 1848. He was the son of Mr. Charles Dorman, of Ashford and Maidstone, and received his general education, partly at Christ’s Hospital, while this establishment was still in Newgate-street London, and partly in Paris. His long association with the North of England began in 1866, when, at the age of 18, he was apprenticed to an old friend of his family, the late Mr. C. G. Johnson, of the iron-making firm of Messrs Richardson, Johnson and Company, of South Stockton. His apprenticeship was a very thorough one, and he learned to perform, the arduous manual work connected with the smelting of iron ore and the subsequent processes of working and rolling the material. In 1876 he entered into a partnership with the late Mr. Albert de Lande Long, the result of which was the foundation of the firm of Messrs. Dorman, Long and Company, Limited. The new concern acquired the Britannia Ironworks and the West Marsh Works, the latter comprising 20 puddling furnaces and three rolling mills, and their first products were rolled joists and other sections made from wrought iron. Mr. Dorman, as he was then, subsequently became associated with practically all the developments in steel manufacture which took place in the Tees-side area, and, after the erection of an open-hearth steel i plant, sheet and wire-making departments and a bridge-building and constructional department were i added to the original undertaking.

In 1899, Messrs. Dorman, Long and Company, Limited, joined forces with Messrs. Bell Brothers, Limited, in the production of open-hearth steel from Cleveland pig, and the success which attended this enterprise led to further developments, including the construction of the Redcar Iron and Steel Works. The firm continued to grow and prosper, and, in recognition of his services in connection with the supply of munitions during the European War, Mr. Dorman was created a K.B.E. in 1918. Five years later he became a baronet. In 1923, Messrs. Dorman, Long and Company, Limited, by the consolidation of their subsidiary companies, took over the entire properties and plant of Messrs. Bell Brothers, Limited, Messrs. The North Eastern Steel Company, Limited, and Messrs. Sir B. Samuelson and Company, Limited, all of Middlesbrough; and Messrs. The Carlton Iron Company, Limited, Ferryhill, County Durham. As a result of this, the annual output capacity of the combined undertakings attained 1,000,000 tons of finished steel. These amalgamations were followed, in 1929, by the fusion of the firm of Messrs. Bolckow, Vaughan and Company, Limited, with Messrs. Dorman Long. The company also possesses important branches in Sydney and Melbourne, Australia, in South Africa, India, and in other places abroad. In addition to his other activities, Sir Arthur was a director of Messrs. Pearson and Dorman Long, Limited, proprietors. of Kentish collieries, and a director of Messrs. Channel Steel Company, Limited, Shakespeare Colliery, near Dover. He also, served on the board of Messrs. Horden Collieries, Limited an important colliery, and coke and by-product producing Undertaking at Darlington.

Of the many contracts secured recently by the firm of Messrs. Dorman, Long and Company, the two most outstanding were the Tyne Bridge at Newcastle and the Sydney Harbour Bridge, which is of similar design but about four times as large as the Tyne Bridge. The Tyne Bridge,, it will be recalled, was opened by H.M. the King on October 10, 1928; the Sydney Harbour-Bridge is now in course of Completion. Both structures have been fully dealt with in our columns. Although he was then, 76, Sir Arthur proceeded to Australia in the spring of 1924, in, order to" be present, along with Sir Hugh Bell, at the laying of the foundation stone of the bridge at Sydney. Sir Arthur was elected a member of the Iron and Steel Institute in 1874; he served on the general reception committees when the Institute visited Middlesbrough in 1908, and Newcastle-upon-Tyne; in 1929. He was for many years a member and and alderman of the Yorkshire North Riding County Council. The heir to the baronetcy is Mr. Bedford Lockwood Dorman, O.B.E, barrister-at-law, who was born in, 1879. Sir. Arthur’s remaining, surviving, son is Mr. Arthur Dorman, managing director of Messrs. Dorman, Long and Company, Limited.