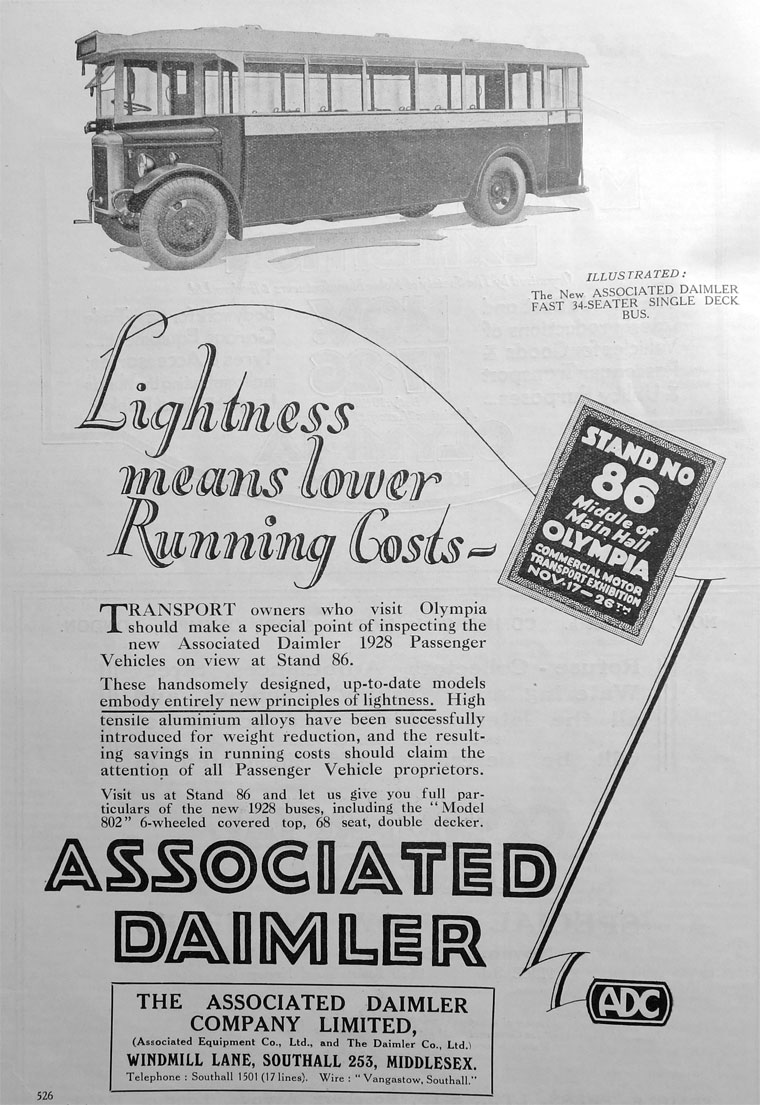 1906 Associated Daimler Co. was registered, as the Associated Equipment Co., controlled by the Underground Electric Railways Co. and the London General Omnibus Co.

1912 AEC was separated from its parent companies; after this a five-year agreement was made with Daimler who would act as sole agents for AEC chassis sold to companies outside the UERC. The agreement came to a premature end in 1916 when AEC came under direct Government control for the duration of the war.

1926 The company was separated from the LGOC group and passed under the control of the Birmingham Small Arms Co which had already absorbed the Daimler Co.

1926 AEC and Daimler entered into an arrangement to form the Associated Daimler Co which would be responsible for sale of chassis and engines. The company was to be floated so that it would be free of the financial control of L.G.O.C. and therefore would be able to supply other companies [1]. In fact the company ended up being wholly owned by UERC in order to completely separate the manufacturing and operating units [2]. New works opened at Hanwell, Southall, west of London.

1927 July. The Associated Daimler Co of Blackhorse-lane, Walthamstow announced that its sales, publicity and commercial departments other than design and experimental were to move to the new Associated Daimler Offices at Windmill-lane, Southall, Middlesex as from Monday August 8th.[3]

In 1927 the LS otherwise known as The London Six model were fitted with Daimler's six-cylinder sleeve-valve engine. They were built in Coventry and carried no name or initials on their radiators.

The most successful being a forward-control 416 which had a frame almost as low as the NS. Nearly 1,000 were sold in a period of two and a half years.

1928 Problems with the Daimler engines led to the break-up of the company into its 2 constituent parts.