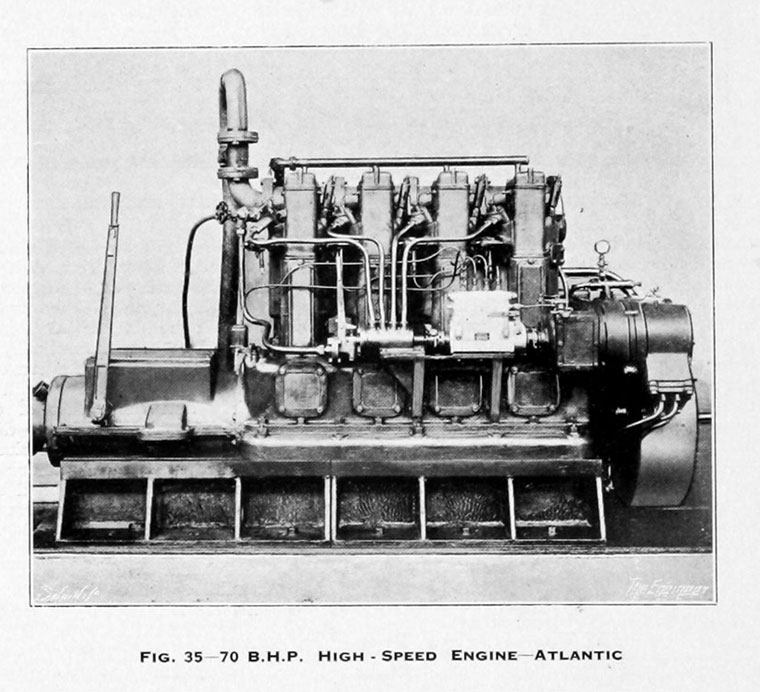 1920 Trading as the Atlantic Land and Marine Engine Co.

From the 1920s, Atlantic engines were favoured for fog signal installations in Scottish lighthouses. They were started as petrol engines with spark ignition, and were switched to paraffin after 10 minutes' running. For example, St. Abb's Head Lighthouse had three such engines driving Alley and MacLellan compressors for the fog horns.[2]

1942 'DEATH OF MR WILLIAM MORTON. January first - New Year’s Day - brought a profound shock to Wishaw when it became known that Mr William Morton, managing director of the Atlantic Engine Company, had died suddenly that day. Mr Morton was a member of one the oldest industrialist families in the town and was highly esteemed in business circles with which he had a widespread connection. By the employees at the works in Glasgow Road he was regarded as a model employer.
The late Mr Robert Morton, father of the deceased, was a man of strong character and inventive genius and, from small beginnings in his workshop Belhaven Terrace, developed one of the largest tinsmith businesses in the county. Specialising in bakers and confectioners plant his products became known far and wide for their enduring quality and efficiency. Following upon a disastrous fire at the old place in the Terrace the present extensive works and offices in Glasgow Road were built, and there it was that the three brothers, of whom Mr Williamson[?] was the last survivor, carried on and extended the work so well founded by their father.
Still continuing to manufacture the goods upon which the firm’s reputation had been built, a purely engineering department was opened, from which, over a period of years, there was an outflow of first class diesel engines. In all these development schemes, Mr William Morton played a prominent part and, latterly, he was in sole control. ....' [3]