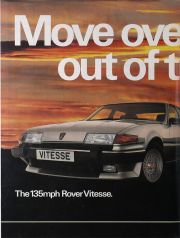 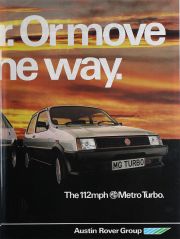 1981 The company was formed as the mass-market car manufacturing subsidiary of British Leyland (BL). It was the result of a comprehensive restructuring programme intended to rescue BL from almost-certain oblivion, and with the Triumph, Morris, Riley and Wolseley marques then effectively defunct, the new, leaner car business was rechristened as the Austin Rover Group and focused primarily on the Austin and Rover marques.[1]

1981 Launched the Triumph: Acclaim, successor of the Dolomite and re-badged version of the Japanese Honda Ballade, built in Cowley, Oxfordshire.

1982 Launched the Austin: Ambassador, a facelifted version of the discontinued Princess.

1982 Michael Edwardes steps down as chairman of BL; Harold Musgrove was appointed chairman of BL Cars. The MG badge was relaunched, two years after being discontinued, on the MG Metro 1300.

1983 Launched the Maestro, which replaced the 10-year-old Allegro.

1983 Austin Rover Group and Leyland Vehicles, the bus and truck division, were both loss making; the other divisions of BL Cars, Jaguar and Unipart, were profitable[2]

The Morris and Triumph marques continued briefly within ARG until 1984 when both were dropped.

1984 Launch of the second Honda-ARG joint venture car. It succeeded the Triumph Acclaim, and in doing so spelled the end of the Triumph marque.

1984 Launched the Austin: Montego as successor to the Morris Ital. This means the end of the Morris marque after 72 years.

1984 Jaguar was floated as a private company

1985 Production began at Cowley of the Honda Ballade.

1986 Launch of the Rover 800-series, jointly developed with Honda and based on the Honda Legend.

1987 The Austin marque is shelved, with the Metro, Maestro and Montego ranges now selling under just their model names. The Rover badge is not used on these cars in the UK market.

1989 Austin Rover is re-branded Rover. Its final launch was the MG Maestro Turbo.[7]