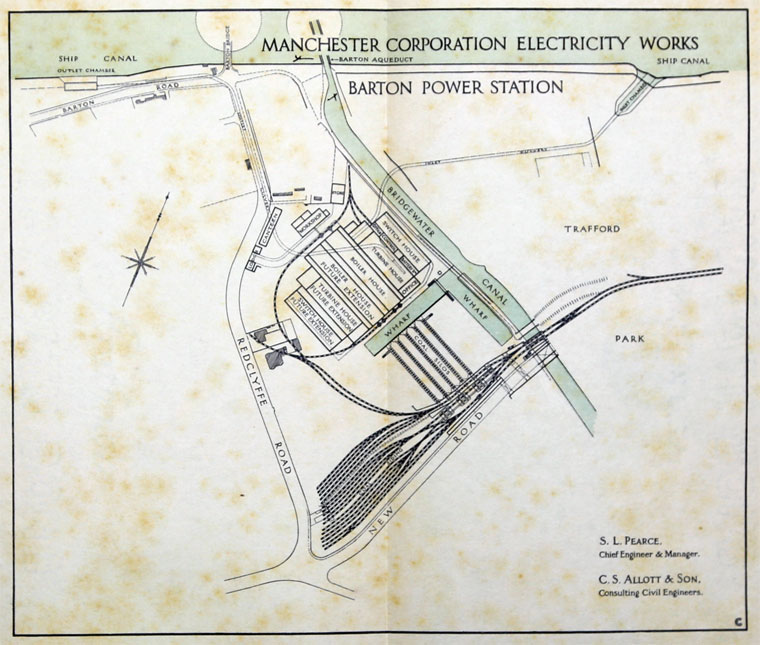 1923. Map of the power station location.

Barton Power Station was a coal-fired power station in Trafford Park on the Bridgewater Canal, near Eccles in Greater Manchester.[1]

June 1923 Visit of the Institution of Electrical Engineers: 1923 Review

"The new Barton station of the Manchester Corporation, to which we briefly alluded last week, and which was visited on June 6th, is situated in Trafford Park on the southerly side of the Bridgwater Canal. Within the limits allowable, the condensing water will be drawn from the Ship Canal with the sewage and sub-soil water, in the form of a purified effluent which passes down the main outfall sewer to the Davyhulme works of the Corporation. The site, comprising, 14 1/2 acres, is suitable for 150,000 kilowatts of plant, but certain limiting factors may possibly preclude developing the station to that extent. As we previously stated, the new existing turbine-house will contain three 27 ,500-kilowatt turbo-alternators with a maximum output of 31 ,250 kilowatts for short periods. Read More.

1923 Power station became operational. The plant was made by Metropolitan-Vickers and Simon-Carves Ltd.; the switchgear was made by British Thomson-Houston. Auxiliary plant, such as boiler feed pumps, was supplied by Mather and Platt. Coal was delivered by use of the Bridgewater Canal.

1928 Extension made to the station

Barton supplied an area of 3,100 square kilometres, which included the city of Manchester and the South East Lancashire Electricity District.