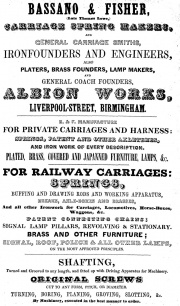 Note: Spelling as per original newspaper article.
'A distressing accident occurred at the manufactory of Messrs. Bassano and Fisher, the Albion Works, in Liverpool street, on Monday morning last, by which a fine young man, James Ogden, lost his life. From the evidence of a witness, John Ward, before the Coroner, on Tuesday last, we are enabled to give the following harrowing particulars — The deceased was 36 years of age, a steadv well behaved man, and had been three years engineer to Messrs. Basano and Fisher. At that time, three years ago, the engine was erected by Messrs. Peel, Williams and Co, of Manchester, and at their recommendation the deceased came from that place to superintend its workings, and had continued to do so satisfactorily until the morning of his death. About ten o’clock on Monday the young man, Ward, applied to him to come and put a band on to a pully in the machine shop. He came and mounted a ladder, 15 feet high, to reach the pully, and in attempting to adjust the band, he was caught by the strap. Instantly perceiving his danger, he called out to a boy to stop the engine, and was immediately whirled round with a frightful velocity, the band being firmly twisted round his left arm. At every revolution of the pully, which made about 65 a minute, his legs struck against the beam of the ceiling. Ward endeavoured to stop the engine, but, it being a patent one he could not succeed. It was a full eight minutes before it could be stopped, and all this while the poor fellow was whirling against the ceiling, being carried round not fewer than 520 times. On being extricated, strange to say he was found to be alive, although his left arm, both legs, and several ribs were broken. He spoke to Mr. Fisher, and said " Oh, my poor wife and children !" He was immediately conveyed to the Queen's Hospital, but died on the road thither.'[1]

1849 Advertisement: ' IMPORTANT SALE
(Under peremptory authority),
Of extremely valuable nearly-new MACHINERY, consisting of STEAM-ENGINE, BLOWING APPARATUS, DRIVING SHAFTS and DRUMS, Self-acting SLIDE LATHES, DRILLING, PLANING, BORING, and SPRING-TESTING MACHINES, powerful STAMP, large and small MUFFLES, FOOT LATHES, BENCH VICES, SMITHS' BELLOWS, GRINDSTONE, &c, &c,
AT THE ALBION WORKS, IN LIVERPOOL-STREET, BIRMINGHAM.
In consequence of a Sale of the Leasehold Premises having been effected, Messrs. CHURTON respectfully announce that they have received positive unreserved instructions from the Mortgagees to SELL by AUCTION, on Friday the l5th day of June inst., precisely at twelve o'clock at noon—the whole of the highly-finished and very superior MACHINERY AND EFFECTS, upon the premises lately occupied by Messrs. Bassano and Fisher, consisting of an extremely valuable bright condensing STEAM-ENGINE, of twenty-eight horse power, with metallic piston, iron flooring, &c, by Messrs.Peel, Williams, and Peel, Soho Works, Manchester; well finished connecting and driving shafts and drums ; blowing apparatus, worked by the engine; twelve large and powerful self-acting slide, screw-cutting, and boring LATHES, with cast-iron beds, varying from 6 ft. to 16 ft.; 20-inch backgeared head stocks, 10-in, 12-in., and 14-in. centres; traversing tables, compound slide rests, and all other requisite appendages, by those eminent makers, Fox and Co, of Derby; Sharpe, Roberts, and Co, Manchester; Batho, Manchester, &c.; two most excellent double-pillared drilling machines, with very complete sliding jaws and tables; planing machine, with 6-ft. bed; boring machine, spring-testing machine, powerful stamp; large double muffle, upon an improved principle, for spring-makers' use ; small muffle, windlasses, bench vices, iron racks, and a variety of other effects, more fully described in the catalogues. N.B.— Catalogues and any further information may be had from Mr. Danks, Solicitor, 3, Waterloo-street, Birningham ; or from Messrs. Churton, Auctioneers, Chester.'[2]