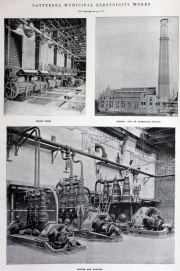 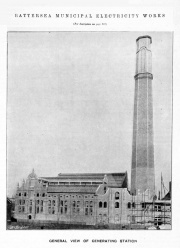 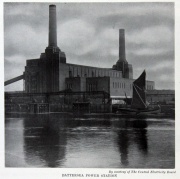 1937, September: Approval given for second phase (Battersea 'B'), with 100 MW turbine-alternator and 5 MW house set. Two more chimneys to be added eventually.

1938 and 1952 Richardsons, Westgarth and Co shipped a large condenser for the second phase of construction. It was installed during the Blitz. The second condenser for phase 2 was shipped from Hartlepool in 1952 [3]

1944 Commissioning of the first section of the Battersea "B", consisting of a 100 MW cross-compound set—comprising a 16 MW high pressure unit (1,350 psi) exhausting to a twin-cylinder 84 MW secondary unit. The second and third sections comprised a 60 MW machine with hydrogen-cooled alternator (1951) and a further cross-compound machine of 100 MW (1953) of similar design to that of the first section.[4]

1950 Pimlico District Heating Scheme officially opened in July. Steam was taken from the main boiler-house range at Battersea "A", passed through 2 x 1.35 MW back-pressure turbines to a heat exchanger from which heated water was pumped through a tunnel under the Thames to a large thermal storage tank providing space heating for adjacent blocks of new flats.[5] Hot water was stored in a tall cylindrical tank, surrounded by a glazed aluminium frame to give it a modern and less 'tanky' appearance.

1950 160-ton alternator stator delivered from Metropolitan-Vickers by road. The level of Stewarts Road, Battersea, had to be reduced by 1 inch under the railway bridge to provide clearance.

1953 Construction of final phase in progress, with fourth chimney.

Note: There is some inconsistency in quoted ratings. Some figures proably refer to the output from the main alternator, while others may include the station unit alternators. Alternative figures in brackets.

One of the 67.2 MW sets and the 105 MW set were made by Metropolitan-Vickers, and the other 67.2 MW set was by British Thomson-Houston.

Work on the first extension to 'B' station was being put in hand in 1945, with a 60 MW 3000 rpm set (TA5) and three boilers (Nos 12, 13, 14). One of the boilers was designed to take aproportion of lower quality pulverised coal, all the other boilers being stoker-fed. TA5 was a single line machine having an HP, IP and LP cylinder. The alternator was to be hydrogen cooled. There was no connection for 'A' station steam supply. There was also a separate turbine-alternator for house service, taking steam at 600 psi. Space would remain for another 100 MW set and three boilers.

Information form The Engineer in 1936: TA3, the first of the 105 MW sets, was the largest built in Europe at the time. It went in the space originally intended for another 67.2 MW set. Steam conditions: 570-600 psi, 800-850 degF. HP, IP, & LP cylinder coupled in line with a 111 kVA alternator, two main exciters and a pilot exciter. Baumann multi-exhaust blading for LP.[6]. Steam admission: the first pair of governor valves admits steam from the steam chest to the first stage and operates for loads up to 63 MW; the second pair admits steam between stages 1 & 2 for loads up to 84 MW (the most economical load); the third pair admits steam after the 9th stage, i.e. after the 8th single impulse stage, for loads up to 105 MW. Hydraulic relays control the position of the governor valves. The amount of opening is determined by the relay pilot valve, whose position is determined by a cam on a horizontal rod. The rod is positioned by the common hydraulic relay controlled by the governor, and carries two other cams for the other two governor valves on that side of the turbine. An identical system is provided on the opposite side (there are governor valves in steam chests on either side of the turbine). The 100 MW main alternator rotor is 58in. in diameter, and weighs 82 tons. The forgings are assembled and kept in position by shrunk rings of high tensile alloy steel. Before leaving the works the completed rotor was balanced and tested at 25% overspeed. The 6250-kVA, 3000-volt house service alternator on the end of the main alternator shaft is for supplying power to the auxiliaries independently of the main station supply. The alternators are supported on a concrete block. It was not possible to use a concrete block for the turbine and condenser, because the space had originally been intended for a 67.2 MW set. Therefore a steel frame foundation was specified. This was of heavy contruction to avoid resonant vibration.[7]

The following information is mainly from the Wikipedia entry.

'B' Station: Three turbine alternators, all made by Metropolitan-Vickers. This consisted of two sets which used 16 MW high-pressure units exhausting to a 78 MW unit and associated with a 6 MW house alternator, giving these units a total rating of 100 MW. The third unit consisted of a 66 MW machine associated with a 6 MW house alternator, giving the unit a rating of 72 MW. Combined, these gave the 'B' station a generating capacity of 260 MW, making a total of 503 MW.

All boilers were made by Babcock and Wilcox. The 'B' station also had the highest thermal efficiency of any power station in the country for the first twelve years of its operation.

The London Power Company had developed an experimental technique for washing flue gases in 1925. It used water and alkaline sprays over scrubbers of steel and timber in flue ducts. The gases were subject to continuous washing, and in the presence of the catalyst iron oxide, sulphur dioxide was converted into sulphuric acid. Battersea Power Station was one of the world's first commercial applications of this technique. This process was applied at Battersea, but was stopped in the 'B' Station in the 1960s, when it was discovered that the discharge of these products into the Thames was more harmful than the gases would be to the atmosphere.

On 17 March 1975, the 'A' Station was closed after being in operation for 40 years. By this time the A Station was co-firing oil and its generating capacity had declined to 228 MW.