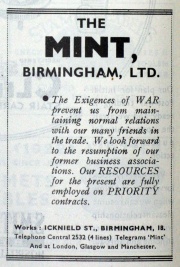 The Birmingham Mint, a coining mint, originally known as Heaton's Mint or Ralph Heaton and Sons, in Birmingham, started producing tokens and coins in 1850, as a private enterprise, separate from, but in cooperation with, the Royal Mint.

Its factory was situated in Icknield Street (grid reference SP057877), on the edge of the Jewellery Quarter. It was created by Ralph Heaton II, using second-hand coin presses bought from the estate of Matthew Robinson Boulton.

1850 On 1 April, the auction was announced of equipment from the defunct Soho Mint, created by Matthew Boulton around 1788. At the auction, on 29 April, Ralph Heaton II bought the four steam-powered screw presses and six planchet presses for making blanks from strip metal. These were installed at the Bath Street works, and in that year trade tokens were struck for use in Australia.

1851 Coins were struck for Chile using the letter H as a mint-mark. The same year, copper planchets were made for the Royal Mint to make into pennies, halfpennies, farthings, half-farthings and quarter-farthings.

1852 The Mint won a contract to produce a new series of coins for France. In this the Mint pioneered the minting of bronze.

1853 Ralph Heaton III (son of Ralph II) took key workers to Marseilles, to equip and operate the French mint there, staying to fulfil the contract, and producing 750 tons of Napoleon III bronze coins from 1853-7.

1853 The Royal Mint was overwhelmed with producing silver and gold coins. The Birmingham Mint won its first contract to strike finished coins for Britain – 500 tons of copper, struck between August 1853 and August 1855, with another contract to follow in 1856. These coins had no mint mark to identify them as from Birmingham. During the peak of operation the four original Boulton screw presses were striking about 110,000 coins per day.

1860 The firm bought a one acre plot on Icknield Street (the current site, since enlarged) and constructed a three storey red brick factory.

1861 A contract for bronze coins for the newly unified Italy was signed, the Mint sending blanks and equipment to Milan to be struck into finished coins by their staff there.

1862 The mint completed, it employed 300 staff. It was, at this time, the largest private mint in the world. On the death of Ralph II in 1862, Ralph III (1827-1891) took over the running of Ralph Heaton and Sons. He added eleven lever presses, made on site, retiring the last of Boulton's screw presses in 1882. In addition to the production of coins and blanks the firm manufactured metal parts for ammunition, gas fittings, medals, ornaments, plumbing fittings, rolled and strip metal, tube and wire.

1871 The first order for silver coinage was for Canada.

1874 The first gold was struck - Burgersponds for the new South African Republic – 837 pieces.

1881 Following parliamentary approval to upgrade the Royal Mint, the firm provided ten lever presses and a cutting-out press, effectively depriving itself of coining contracts from the Royal Mint for some time.

1889 Shortly before his death, Ralph III converted the family business into a public limited liability company, passing control, on 22 March, to the new company named The Mint, Birmingham, Limited. The agreement paid £110,000 to Heaton with £10,000 worth of copper. In addition £2,000 annual rent for the Mint property would be paid, and his son, Ralph IV would be general manager, his other sons Gerald and Walter would have senior positions, and he, Ralph III, would remain as a director. He died two years later.

1889 The company was registered on 20 March, to take over the business of Ralph Heaton and Sons, manufacturers of coins, brass and copper goods, and metal for ammunition purposes. [1]

Almost immediately his son, Ralph IV, was elected Managing Director by the board.

Orders for colonial coins, blanks and bar metal were a steady source of business until, in 1912, an order for 16.8 million bronze coins for Britain.

1912 British penny coins minted by Heaton and dated 1912 can be identified by a very small upper case letter 'H' appearing alongside the date: many of these coins were removed from circulation by collectors during or before the decade preceding February 1971. However, also in 1912, the Mint saw its first competition as the Kings Norton Metal Co was also contracted to supply bronze blanks to the Royal Mint, and in 1914 struck coins for the colonies.

WWI. During the First World War the Mint produced strip brass and copper tubing for munitions.

1918 and 1919. Further orders for 7.1 million pence saw the mint striking coins for the home market.

1920 Ralph IV retired. His successor was his brother in law, W. E. Bromet.

1922 Heaton's son Ralph V joined the firm, on the commercial part of the business, eventually rising to the position of company secretary.

1923 The almost monopoly position of the Mint as supplier to foreign (non-empire) countries was lost as the Royal Mint was given permission to supply to the world market, although the Mint continued to supply the Royal Mint.

1935 During The Depression profits were minute and after shareholder revolt the Mint was taken out of the hands of the Heaton family in May. From this time the production of coins became a small part of the overall business of non-ferrous metal sheet and tube production. Coinage accounted for 10-20% of the business from 1940-64.

WWII again demanded quantities of brass sheet and copper tube for ammunition and aluminium-brass cylinder linings for Rolls-Royce aeroplane engines. Bomb damage and the effects of continuous production for the war left the factory run-down.

1948 It was unable to supply new minting machinery to the Royal Mint, but did provide the necessary drawings.

1949 The Mint produced an edition of the Maria Theresa thaler, a silver "trade dollar" widely used in the Middle East and previously minted by the Vienna Mint, or later, the Rome Mint. Further mintings were in 1953, 1954 and 1955.

By 1953, coins accounted for only 5% of the business. A major product was copper tubing and fittings for the building industry, supplied under the MBL trade mark. Medals, slot machine tokens and gambling tokens were produced.