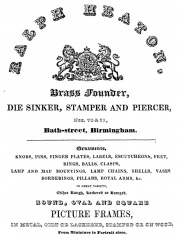 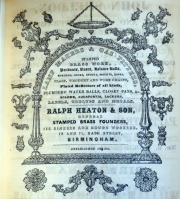 Ralph Heaton and Sons of the Birmingham Mint

1808-1812 the company moved to Shadwell Street. During that time Ralph Heaton II became apprenticed to Thomas Willetts as a die maker.[1]

By 1817 Ralph I gave Ralph II a tenement and shop at the corner of Bath Street and Shadwell Street. Although the two men shared an address, they separately administered their businesses. 1817 marks the birth of the business in question, which endured for nearly two centuries. In 1847 Ralph II's business became Heaton and Son, when Ralph III joined his father. In 1853 the business became Heaton and Sons when George began working with them. This name was retained until 1889.

1817 On 2 December, Ralph Heaton, an engineer, inventor and businessman, conveyed to his son Ralph Heaton, Junior, land and buildings at 71 Bath Street, to enable him to develop a separate company. Ralph, Junior, engaged in brass founding, stamping and piercing. Brass chandeliers were made for the newly invented gas lighting and a "bats wing" burner patented.

1850 On 1 April, the auction was announced of equipment from the defunct Soho Mint, created by Matthew Boulton around 1788. At the auction, on 29 April, Ralph Heaton, Junior bought the four steam-powered screw presses and six planchet presses for making blanks from strip metal. These were installed at the Bath Street works, and in that year trade tokens were struck for use in Australia.

1851 Coins were struck for Chile using the letter H as a mint-mark. The same year, copper planchets were made for the Royal Mint to make into pennies, halfpennies, farthings, half-farthings and quarter-farthings.

1852 The Birmingham Mint won a contract to produce a new series of coins for France. In this the Mint pioneered the minting of bronze.

1853 Ralph Heaton III (son of Ralph Heaton, Junior) took key workers to Marseilles, to equip and operate the French mint there, staying to fulfil the contract, and producing 750 tons of Napoleon III bronze coins from 1853-7.

1853 The Royal Mint was overwhelmed with producing silver and gold coins. The Birmingham Mint won its first contract to strike finished coins for Britain – 500 tons of copper, struck between August 1853 and August 1855, with another contract to follow in 1856. These coins had no mint mark to identify them as from Birmingham. During the peak of operation the four original Boulton screw presses were striking about 110,000 coins per day.

1860 The firm bought a one acre plot on Icknield Street (the current site, since enlarged) and constructed a three storey red brick factory.

1861 A contract for bronze coins for the newly unified Italy was signed, the Mint sending blanks and equipment to Milan to be struck into finished coins by their staff there.

1862 The mint employed 300 staff. It was, at this time, the largest private mint in the world. On the death of Ralph Heaton, Junior in 1862, Ralph III took over the running of Ralph Heaton and Sons. He added eleven lever presses, made on site, retiring the last of Boulton's screw presses in 1882. In addition to the production of coins and blanks the firm manufactured metal parts for ammunition, gas fittings, medals, ornaments, plumbing fittings, rolled and strip metal, tube and wire.

1871 The first order for silver coinage was for Canada.

1874 The first gold was struck - Burgersponds – 837 pieces for the new South African Republic.

1881 Following parliamentary approval to upgrade the Royal Mint, the firm provided ten lever presses and a cutting-out press, effectively depriving itself of coining contracts from the Royal Mint for some time.

1888 Orders for the Chinese Mint

1889 Shortly before his death, Ralph III converted the family business into a public limited liability company, passing control, on 22 March, to the new company named The Mint, Birmingham, Limited. The agreement paid £110,000 to Heaton with £10,000 worth of copper. In addition £2,000 annual rent for the Mint property would be paid, and his son, Ralph IV would be general manager, his other sons Gerald and Walter would have senior positions, and he, Ralph III, would remain as a director. He died two years later.