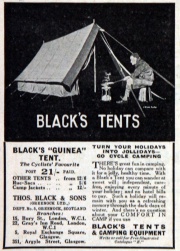 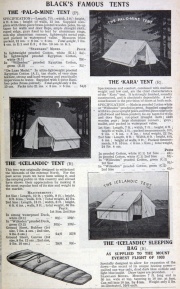 1853 While in Port Phillip, Australia, he left his ship for the goldfields and spent two years gold-digging in the Ballarat District of southern Australia.

1856 Sailed home as a fare-paying passenger. Later, went to Spanish Guinea in West Africa as an agent for the London firm of Laughland & Brown, trading Calico and other goods for ivory. Returned to Glasgow after about eighteen months for a holiday. A second trip to the same place in West Africa was not satisfactory. He suffered badly from dysentry and eventually returned home, where he made a full recovery.

1861 Married and became employed as a sailmaker in Glasgow.

1863 After about two years learning the trade, he started his own sail-making business in Greenock, which prospered from the start.

Thomas Black had a son, also named Thomas, who started his working life with his father, but seeing no future in the sail-making business, due to the decline in sailing ships brought about by the rise in steam engines, left with his wife and young family to join relatives ranching in California.

1904 Thomas Black Senior was now an old man and ill, so his son Thomas Junior was called home to wind up the failing business. Whilst journeying across America on his way home, he stopped off in Kansas City and saw a thriving canvas products business making tents, marquees and other large canvas goods. This set him thinking, and on returning home, decided not to close his father’s business, but instead, to change the the product range, to bell tents, marquees and garden tents for fetes and functions.

1905 Thomas Black Senior, the founder of the business, died. Thomas Junior became head of the firm, with his son, Daniel Crawford Black assisting. Hiring out equipment was begun with one-time sail-makers having to erect tents and marquees.

1921 Black’s Travel Agency started at 18 Nicholson Street, Greenock, to meet the demand for emigrant passages to North America and Australasia.

Camping Club magazines, Exhibition Guides and Handbooks, advertisements, direct unpublished sources and a collection of over 90 tents. Compiled by TA (2014)