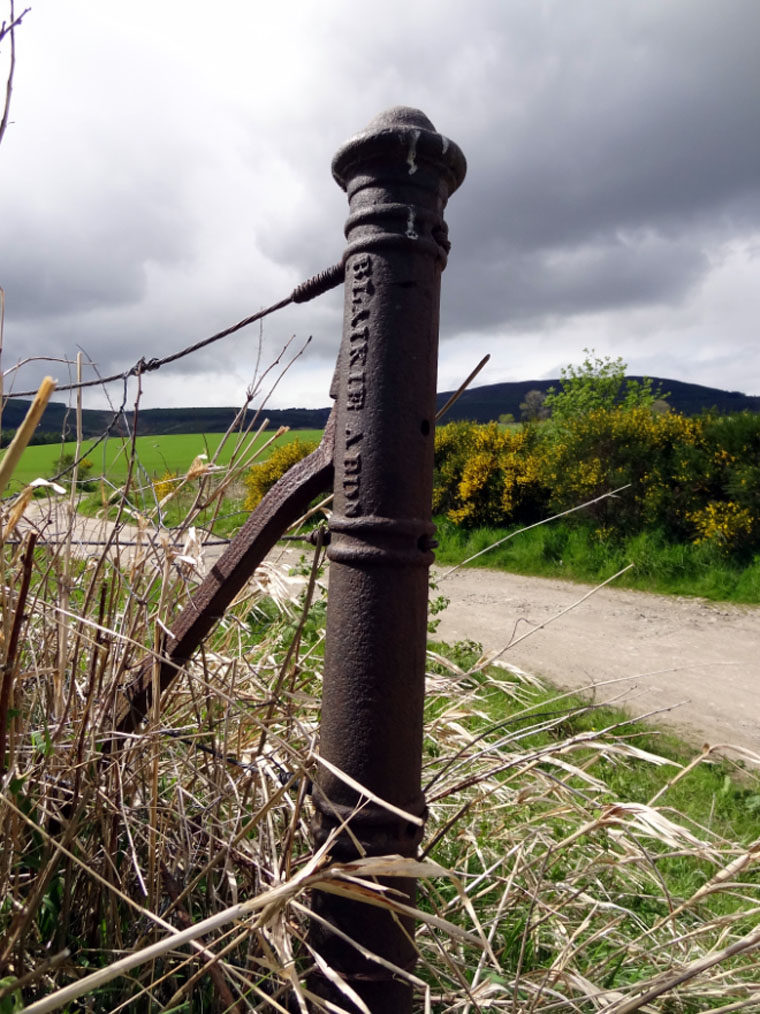 Cast Iron Fence Post - a contract for the Alford Valley Railway which opened in 1859.

Note: Footdee Ironworks had been owned by John Duffus and Co, before the business and the works were taken over by Blaikie Bros in 1845 [1]

Shipbuilders, bridge builders, makers of steam engines and other machinery.

1847 'THE ABERDEEN RAILWAY ..... We notice, also, on the south of Friockheim, a fine stone bridge across the line.To the south of that point again, we observe two cast iron bridges, having inscribed on their large exterior beams, in characters to be read by posterity, "Blaikie Brothers, Aberdeen." The stability, novelty, and elegance displayed in these two bridges, are considered the "good folk" of Friockheim such as to entitle them to pronounced the very "wonder of the world". [2]

Sugar mill machinery (steam engine and gear train) built in 1863 has survived in the remains of a sugar mill on the Salialevu Estate on Taveuni (Fiji). The gear wheels bear the words Blaikie Brothers Engineers, Aberdeen, and the date, 1863.[3]

1881 'The Electric Light at Footdee Ironworks.—With the view of ascertaining the utility of the electric light for illuminating business premises, an experiment was last night conducted at the Messrs Blaikie's Footdee Ironworks, Aberdeen. The lamp used was what is known as the " Arc” and was suspended from a crane at a height of fifty feet. The current was generated by a Gramme dynamo-electric machine, and the motive power was supplied by a four horse-power portable engine, the property of the Messrs Blaikie. The space lighted measured about two acres. The light, which was about of candle power, was at times unsteady, but it must be admitted that the weather was decidedly against outdoor experiment, the lamp being swayed about considerably. On being transferred into the moulders' workshop a much better result was obtained, the light proving steady and brilliant. On the whole, the experiment was eminently successful, and it is possible that the light in one or other of its forms may yet be adopted by the firm. To-night light will be further experimented upon in the boilermaking shop, when it will be subjected a more thorough test. The whole arrangements last night were conducted by Mr Spark, electrician, George Street.'[4]. Note: The expression 'about of candle power' has been correctly transcribed, as has the name of the electrician.

1891 'FOR SALE AS A GOING CONCERN. The Well-known, Extensive, and Old-Established BUSINESS of Blaikie Brothers F.ngineere, Boilermakers, and Ironfounders, Footdee Ironworks, Aberdeen (Established 1845), is for Sale as a Going Concern. The reputation of this Firm is well known, and their trade connection is very valuable. The Plant, Tools, and Patterns are high-class, and comprise a complete assortment for Engineers', Boilermakers', Founders', and Bridgebuilders' purposes. The Firm have supplied Heavy Castings for the Navy, and Engines and Boilers for many First-class Vessels, and have also constructed some of the largest recent work in Iron Bridge and Viaduct Construction in the North Scotland. They have also important connections for Supply of Sugar and Rice Manufacturing Plant and other Machinery to the Colonies, Java, Mauritius, Singapore, Burmah, &c. The Ground owned in connection with the Works amounts to about Six Acres (of which 2½ acres will reserved by the Vendors if desired), and is in immediate proximity to the Harbour and Railways. Inventories and Valuations have been made by Messrs Wheatley, Kirk, Price, and Goulty, of Manchester, and may seen in the hands of Messrs L. M'Kinnon, Junior, & Son, Advocates, 23 Market Street, Aberdeen, from whom all further particulars may be obtained. 28th March, 1891.' [5]