Grace's Guide is the leading source of historical information on industry and manufacturing in Britain. This web publication contains 140,497 pages of information and 227,382 images on early companies, their products and the people who designed and built them. 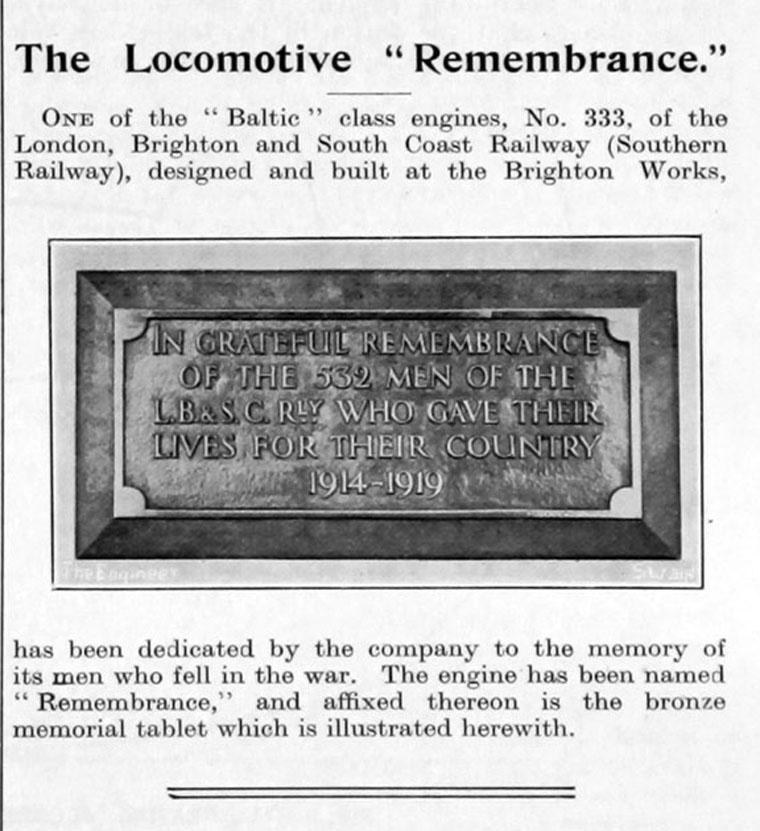 1923. The Bronze Memorial Tablet on the Locomotive 'Remembrance'. 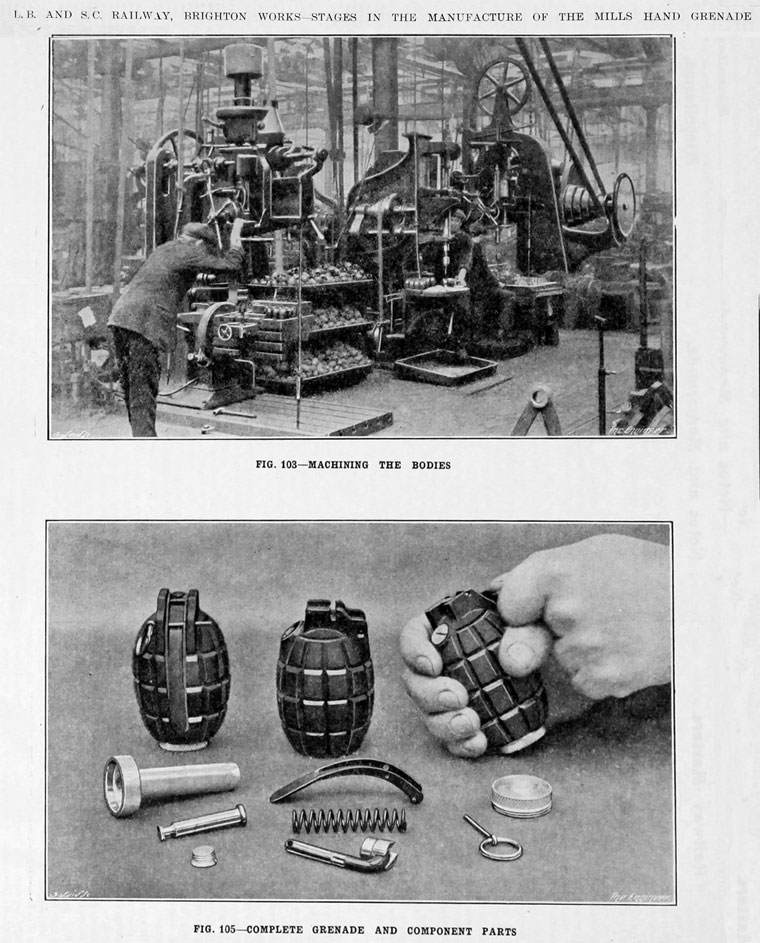 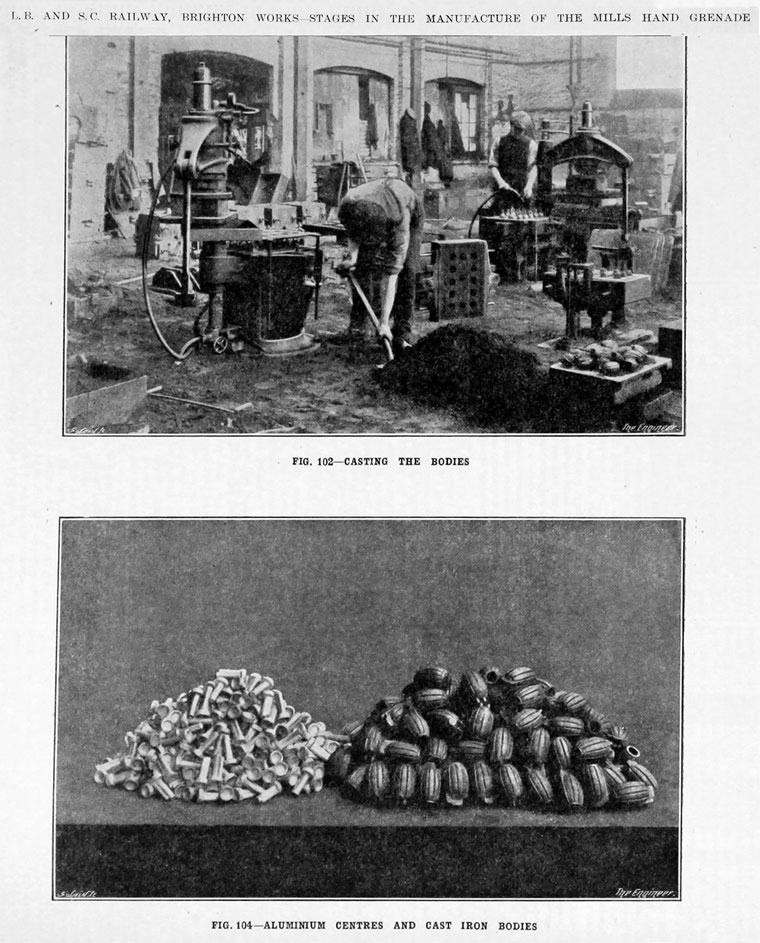 The London and Brighton Railway built one of the first ever railway-owned locomotive construction and repair works on a site next to the Brighton railway station. Following his appointment as Locomotive Superintendent of the successor company (the London, Brighton and South Coast Railway (LB&SCR) in November 1847, John Chester Craven set about enlarging and modernising the works.

From 1852 he used it for the construction of new steam locomotives of his own designs. Thereafter Brighton works was responsible for the design and construction of a large proportion of the locomotives operated by the LB&SCR under the engineers William Stroudley, Robert John Billinton, Douglas Earle Marsh and Lawson Butzkopfski Billinton. However, the situation of the works on a slope in the centre of the town always imposed restrictions on the space available for efficient operation.

In the 1870s William Stroudley considered moving the works to a new site at Horley midway between London and Brighton. He was persuaded to keep them in Brighton when the local council agreed to the removal of a chalk hill on the west side of the line to accommodate a new motive power depot and paint shop, thereby allowing for the enlargement of the other facilities. Stroudley also removed the marine engineering work undertaken by the works to a new facility in Newhaven.

By 1910 the efficient operation of the works was again hampered by its location and so the LB&SCR purchased land in Lancing for a new carriage and wagon works which was opened in 1912.The following year Lawson Billinton presented proposals to the LB&SCR board to close Brighton works and concentrate all locomotive building and repair at a new facility a few miles away at Lancing Carriage Works.

WWI The advent of the First World War in 1914 put an end to this plan, and the works became involved in munitions production. The last locomotive to be build at the works by the LB&SCR was L Class 4-6-4T 333 Remembrance. An article on the Brighton and Lancing Works in War Time was published in The Engineer. [1]

1923 Following the merger of the LB&SCR and other railways in southern England to form the Southern Railway, during the Railways Act grouping of 1923, most new locomotive construction transferred to Eastleigh Works. Brighton was however responsible for the building of ten examples of Maunsell's "River class", his SR Z class 0-8-0T locomotives and some examples of his Southern Railway U Class.

After mid-1931, with the impending electrification of the main line between London and Brighton, many of the workmen and much of the equipment were transferred to Eastleigh and Ashford. The Paint Shop was converted into an Electric multiple unit maintenance facility and Brighton Works once again seemed likely to close.

WWII Fears of possible air attacks on Ashford and Eastleigh, together with the need for more steam locomotive construction, during World War II brought about the re-opening and re-equipment of the workshops in 1941. The drawing office was primarily responsible for the detailed designs of Bulleid's revolutionary Merchant Navy 4-6-2 express passenger locomotives, although they were built at Eastleigh Works. Brighton works built more than half of Bulleid's Q1 class 0-6-0 freight locomotives and 93 of the LMS Stanier type 2-8-0 freight locomotives for the War Department.

The heyday of the works was during the decade after the war, when Brighton built more than 100 of Bulleid light Pacific's of the West Country and Battle of Britain classes. The works would have been responsible for the entire 110 locomotives, had not the works become involved in the design and construction of Bulleid's ill-fated Leader class in 1949. The thousandth locomotive to be constructed at the works was 21C164 Fighter Command, in July 1947.

In the years after the nationalisation of British Railways (BR), Brighton works constructed 41 examples of the LMS Fairburn 2-6-4T for use on the Southern Region staff. Brighton staff were also involved in the design of three of the most successful BR standard classes – the class 4 4-6-0 tender, and class 4 2-6-4 tank classes together with the 9F 2-10-0 class – and the works built 130 examples of class 4 tank locomotives between 1951 and 1957.

1952 At the time of the centenary of locomotive building in 1952, Brighton works covered nine acres and employed about 650 staff. However, under the modernisation plan for BR announced in 1954, Brighton Works was once again passed over.

Locomotive building ceased in 1957, after the construction of BR standard class 4 tank 80154 and locomotive repairs ceased the following year.

1962 The buildings were closed

1969 The buildings were demolished

After the closure of the works, part of the workshop was used for the building of Isetta microcars between 1957 and 1964 and some of the land remained in railway use, associated with the stabling of electric multiple unit trains and other maintenance functions. Much of the land later became a large open car park, and was used for a popular market every Sunday morning. Some land on the eastern side was given over to an assortment of retail units including a number of car dealers with temporary structures being the predominant building type, and a strip below the yard was used for retail premises; behind these remained the stone and brick columns over which the yard had been extended when space was at a premium. Much of the land, that was not suitable for use either by lock-up traders, for car parking or still in use by British Rail, was left derelict. Final traces of the locomotive works vanished with the demolition of the elevated 1930s Southern Railway signal box in the mid 1980s, the signal box having used part of the main locomotive erecting-shop wall as support.