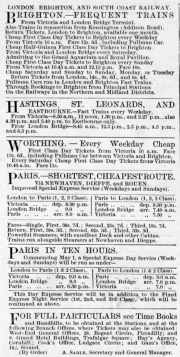 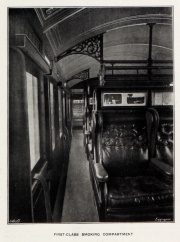 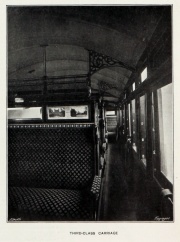 1909. 'Grosvenor', one of the coaches of the Southern Belle Express. 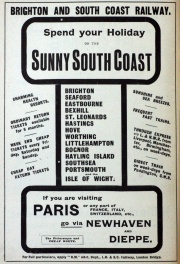 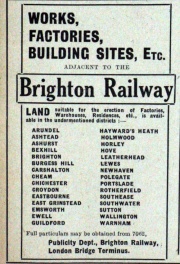 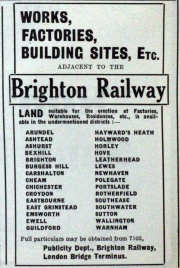 The London, Brighton and South Coast Railway (LB&SC Railway) (commonly known as "The Brighton line"), was a railway company in the United Kingdom from 1846 to 1923. [1]

Its territory formed a rough triangle, with London at its apex and practically the whole coastline of Sussex as its base. It was bounded on its western side by the lines of the London and South Western Railway; on its eastern by the South Eastern Railway (later the South Eastern and Chatham Railway). It supplied the most direct routes to the South Coast seaside resorts of Brighton, Eastbourne and Worthing among many others. At the London end was a complicated suburban and outer-suburban network of lines.

The London, Brighton and South Coast Railway (LB&SCR) was formed by Act of Parliament on 27 July 1846, through the amalgamation of a number of pre-existing railway companies.

1846 The company was incorporated.

1849 The South Eastern Railway and the LB&SCR agreed on access to London, something which had been a source of friction between the companies. The SER obtained access over the "Croydon" lines to Corbett's Lane junction with the London and Greenwich Railway.

1858 The Victoria Station and Pimlico Railway was sanctioned, to connect from the West End of London and Crystal Palace Railway near the Battersea terminus and cross the river to the new station at Victoria Street, Pimlico. The LB&SCR subscribed half of the capital and was entitled to half of the new station.

1860 The line into Victoria was opened.

1909 The London Brighton and South Coast Railway introduced an electrification system using AEG as the electrical contractor with power supplied by the local authority. Following testing on the South London line in 1909 public services commenced there and to Crystal Palace by 1911. A high voltage distribution system of 25Hz at 6666.66V was used.[4]. The carriages for the electrified service were built by Metropolitan Amalgamated Railway Carriage and Wagon Co

1920 Article on the LBSCR Brighton and Lancing Works in War Time in The Engineer. [5]

1923 Became part of the Southern Railway

1925 Electrification at 6kV was extended from Balham to Coulsdon North and to Sutton via Selhurst.

However, the Southern Railway subsequently decided that the AC system was "non-standard" and should be discontinued. The AC electric trains on the South London line were replaced by DC trains in 1928, and those on the Crystal Palace (Low Level) line in 1929. The last overhead-wire AC electric train left Victoria for Coulsdon North on 22 September 1929.[7]