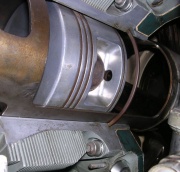 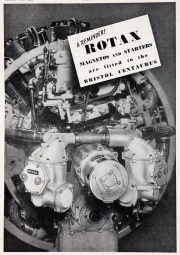 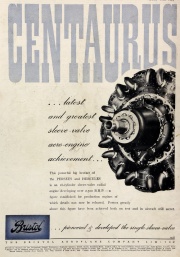 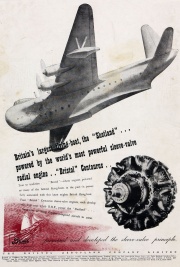 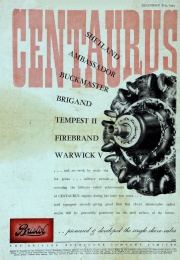 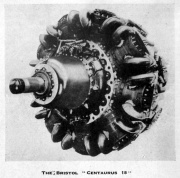 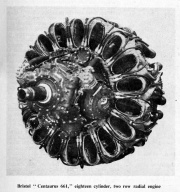 Like most Bristol Engines designs, the Centaurus was based on the mechanicals of an earlier design, in this case the "classic" 5.75 in (146 mm) piston from their original 1918 Jupiter. The Jupiter piston was still in use in the contemporary 14-cylinder Hercules, which was being brought into production during the design of the Centaurus.

The capacity of the Centaurus was increased by placing the pistons in a longer-stroke cylinder, and moving to two rows of nine cylinders instead of two rows of seven. The resulting engine raised the displacement from the Hercules' 2,364 cubic inches (38.7 litres) to a massive 3,270 cubic inches (53.6 litres), making the Centaurus one of the largest piston aircraft engines to enter production.

While Bristol maintained that the Centaurus dated from 1938, production could not start until 1942 owing to the need to get the Hercules into production and improve the reliability of the entire engine line. Nor was there any real need for the larger engine at this early point in the war, when most military aircraft designs were intended to mount engines of 1,000 hp or a little more. The Hercules' ~1,500 hp was simply better suited to the existing airframes then in production.

In fact, the Centaurus did not see any use until near the end of the war, first appearing on an up-scaled version of the Vickers Wellington, the Warwick. Other wartime, or just-post-wartime, applications included the Bristol Brigand (and Buckmaster), Hawker Tempest and Hawker Sea Fury, and the Blackburn Firebrand. The engine also saw post-war use in civilian airliners, including the ill-fated Bristol Brabazon prototype.