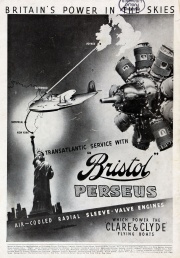 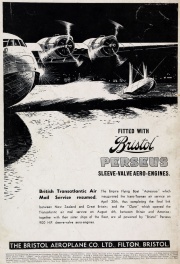 The Perseus was a nine cylinder one-row radial aircraft engine produced by the Bristol Engine Co commencing in 1932. It was not widely used due to the rapid introduction of much more powerful two-row engines like the Bristol Hercules, but is notable as being Bristol's first successful sleeve valve design.

In late 1925 and early 1926, the RAE published a series of papers by Harry Ricardo on the sleeve valve principle. In short, the sleeve valve replaced the normal poppet valves in the engine with a rotating sleeve inside the cylinder. As the sleeve rotated, holes in the sleeve lined up with holes in the cylinder to open and close the valve. The advantages were primarily simplicity and that less energy is needed to run the system. At higher powers and RPMs, when the engine needs to move considerably more air more quickly, the sleeve design comes into its own. Normal poppet valves require some time to open and close, limiting the maximum speed of the engine. This can be corrected with stronger mechanisms, but only at the cost of increased power needs and stronger (and heavier) mechanisms.

The sleeve required almost constant power to drive at any speed; driving it at high speeds was no more difficult than low. The sleeve is also much easier to "drive" than the poppet in terms of layout, there are no push-rods or rockers needed, just a gear at the base of the cylinder. This makes it much easier to use in "dense" two-row engines where the push-rods otherwise take up considerable space.

It was this "future expansion" capability that interested Roy Fedden when he first read of the work. By 1927 Fedden had built a working two cylinder V as a testbed, with the idea of developing it into a V-12. However several problems cropped up on the design, notably that the sleeves tended to burst during the power stroke and strip their driving gears. This led to a long series of tests and materials changes and upgrades that required six years and an estimated 2 million pounds, but by 1933 the problems had been worked out.

The result was a Jupiter sized engine adapted to the sleeve system, the Perseus, and its smaller cousin, the Bristol Aquila. The first production versions of the Perseus were rated at 580 horsepower 433 kW), the same as the same-year model Mercury, which shows that the sleeve system was being underutilized. However this was quickly uprated as improvements were introduced, and by 1936 the Perseus was delivering 810 hp (604 kW), eventually topping out at 930 hp (690 kW) in 1939. This is roughly double the power of the Jupiter.

The Perseus saw limited use in the civilian field, notably on the Short Empire flying-boats, but was more common in the now-expanding military field where it was found on the Westland Lysander, Vickers Vildebeest, Blackburn Botha, Skua and Roc bombers.

The main contribution of the Perseus is that its mechanicals were used as the basic piston and cylinder for the "twinned" versions, the tremendously successful Hercules and Centaurus. It was in these designs that the advantages of the sleeve valve were finally put to good use, and by war's end the Centaurus was one of the most powerful engines in the world.