Looking north through the lock which separates the Feeder Canal (in the foreground) from the Floating Harbour beyond. The bridge carries the railway from Temple Meads. The brick building in the distance was the Broad Plain soap works of Christopher Thomas and Brothers 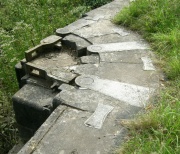 Britain's industrial development was shaped by water, either for manufacturing purposes or for transport.

The place of rivers and canals in the making or dividing of cities is usually self-evident. However, in the case of Bristol, the picture is complex. It may not be readily apparent, even to residents, that the alteration of the waterways in the 19th century produced, in effect, two islands, one containing part of the former commercial centre and the other St Philip’s Marsh, both dependent on bridges or ferries for access. One source notes that a ferry replaced by St Philip's Bridge in 1838 carried over 100,000 passengers a year [1]

A short survey of the waterways may aid understanding of the city's industrial development. It is not intended to go into detail here, as there are excellent sources of information online [2] [3]

Bristol's prosperity grew on the basis of Sugar, Slavery, Shipping and Smoking. Shipping was hampered by the fact that vessels entered and left the city via the River Avon, which was subjected to an unusually large tidal range.

The river was crowded with boats leaving and entering the city with the tides. At low tide boats were left high and dry, and immovable.

What was needed was a 'floating harbour', sealed off from the tides by locks. This would allow the docked vessels to stay afloat while loading, unloading and waiting for the next tide.

The solution involved cutting the River Avon at Rownham (close to Temple Meads) and diverting it via the New Cut, to rejoin the old course below Clifton. The cut-off was not total at Rownham, narrow locks being provided there.

Another feature was the Feeder Canal, whose western end joined both the River Avon and the Floating Harbour via locks. The eastern end connected to the Avon at Netham via locks. Near this point was a weir which represented the highest point to which normal tides flowed. The Feeder Canal feeds water from the River Avon to the Floating Harbour. Water also entered the harbour from the River Frome.

The main access to the Floating Harbour for ships was through Cumberland Basin.

For smaller vessels, there was additional access between the River Avon (New Cut) and the harbour via locks at Bathurst Basin. These locks are now sealed off. The inner lock was formerly crossed by a railway lifting bridge. The bridge's steam-driven machinery was a fine piece of work, which was fortunately saved and is held in the reserve collection of Bristol's 'M Shed'

The waterways are more or less intact, expect for a branch known as St Augustine’s Reach, which has been filled in, creating a large traffic island in front of the Hippodrome theatre.

The first proposal for a non-tidal harbour at Bristol is credited to John Smeaton, in 1765. In 1802 William Jessop was engaged to develop a scheme. The harbour was opened in 1809.

The development of ever larger ships gradually reduced the viability of the docks. Ironically, one of the vessels which represented a step change in the size and technology of ships was Brunel's SS Great Britain, built at the Floating Harbour.

Isambard Kingdom Brunel was called in to improve and enlarge the locks at Cumberland Basin. The work was completed in 1848.

Thomas Howard, first full-time engineer for the Docks, developed plans for the improvement of the river; an Act was obtained in 1865 for cutting off points and constructing a new entrance lock, enlarging Cumberland Basin and making a new junction lock. These improvements were completed in 1873 and, as a result larger vessels, could reach Bristol.

However, the constraint imposed by having to negotiate the tidal River Avon eventually led to larger docks being built further west, at Avonmouth.

1877 the Avonmouth Docks (the first rivermouth dock) was constructed.

1879 the Portishead Dock was opened, on the opposite bank of the mouth of the river from the Avonmouth Docks.

1884 Both of these docks were acquired by the City Corporation and administered by the Bristol Docks Committee, later the Port of Bristol Authority

1907 The Royal Edward Dock was built at Avonmouth

The Floating Harbour was used commercially until the 1970s.