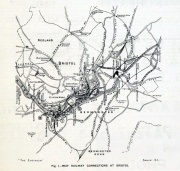 It was authorised to build from the harbour on the east side of the city of Bristol, by Mangotsfield, to Coalpit Heath. On the same day there was authorised the Gloucester and Avon Railway, which was to run from the Kennet and Avon Canal at Keynsham to Rodway Hill, Mangotsfield where it was to join the Bristol and Gloucestershire. Both were railways of 5ft gauge. Its extension to Bristol, Temple Mead, the terminus of the Great Western Railway and the Bristol and Exeter Railway, and from Westerleigh near Coalpit Heath to Standish Junction, Stonehouse where it was to join the Cheltenham and Great Western Union Railway, and the enlargement of the gauge to 7ft, were subsequently sanctioned.

The Bristol and Gloucester had to continue to accommodate the Gloucester and Avon for a distance of about 2 miles 50 chains. Instead of having a third rail from the broad gauge, as required by the Act, Brunel with his usual high-handed manner, laid the two rails for the 5ft gauge within the two for the 7ft. The existing track of the former was left in, and consequently the rails were of unequal height the siding connections were of what the Board of Trade inspector called a very objectionable character, and the whole as " highly dangerous to the safety of the public travelling on the Bristol and Gloucester line."[1]

In 1824 a meeting was held at the White Lion Inn in Bristol to discuss the idea of a railway to be known as the Bristol, Northern and Western Railway. This was the period around the opening of the Stockton and Darlington Railway in 1825, when many ambitious schemes were being floated, between London and Bristol and Birmingham and also the East Midlands.

Although there was a great deal of initial enthusiasm, there were technical difficulties and a financial crisis, and the plans were never carried through. Towards the end of the decade the country was in an economic recession, but two horse-drawn tramways were built, the Avon and Gloucestershire and the Bristol and Gloucestershire.

In spite of the problems, interest in Bristol remained high. William Townshend was appointed surveyor. Through the 1830s lines were in active construction, not only the Birmingham and Gloucester, but others from Birmingham through the Midlands to Yorkshire. A railway would give access to the coal and minerals and the manufactured riches of the North.

1844 July 8th. The line opened for passenger traffic but at the opening ceremony the engine was derailed just outside Gloucester.

1846 It became part of the Midland Railway