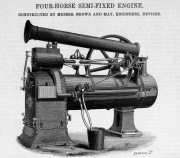 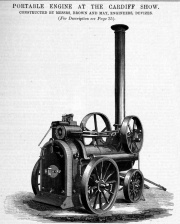 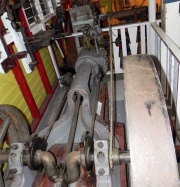 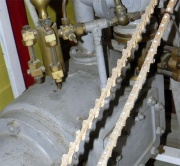 Brown and May of North Wiltshire Foundry, Devizes were engineers and iron-founders and built traction engines, road locomotives and portable and stationary steam engines.

1854 The company was formed by Charles Neale May and William Brown, both aged 24 and both had served apprenticeships together at Barrett, Exall and Andrewes. Both were firstly married to women from Reading called Philbrick and therefore probably related. Note: Some sources say that it was Charles May of Ransomes and May but research shows that these are two different persons.

1860 Exhibited at the Society of Arts Exhibition: a temperature indicator for kitchen ranges, which used a semi-circular bimetallic strip whose movement was transmitted to a pointer by rack and pinion [2]

1861 At the Royal Agricultural Society's Trial of Steam Ploughs they entered a steam digger of M. Romaine of Canada West but manufactured by them, and a portable engine. [3] [4]

1876 Exhibitor at the Royal Agricultural Show at Birmingham showed a steam blower for cleaning tubes without a brush. [6]

1894 Catalogue of portable and semi-portable steam engines and much other machinery. [8]

1895 The company was registered on 30 November, to acquire the engineering business of a firm of the same name. [9] [10] Both Brown and May were 65 and wanted to retire, so the company, up to now a partnership, was floated as a limited company, B&M Ltd.

Company nearly failed in 1911 and new shares were issued

1912 Built one showman's road locomotive that survives. May have made others.