Grace's Guide is the leading source of historical information on industry and manufacturing in Britain. This web publication contains 147,369 pages of information and 233,518 images on early companies, their products and the people who designed and built them. 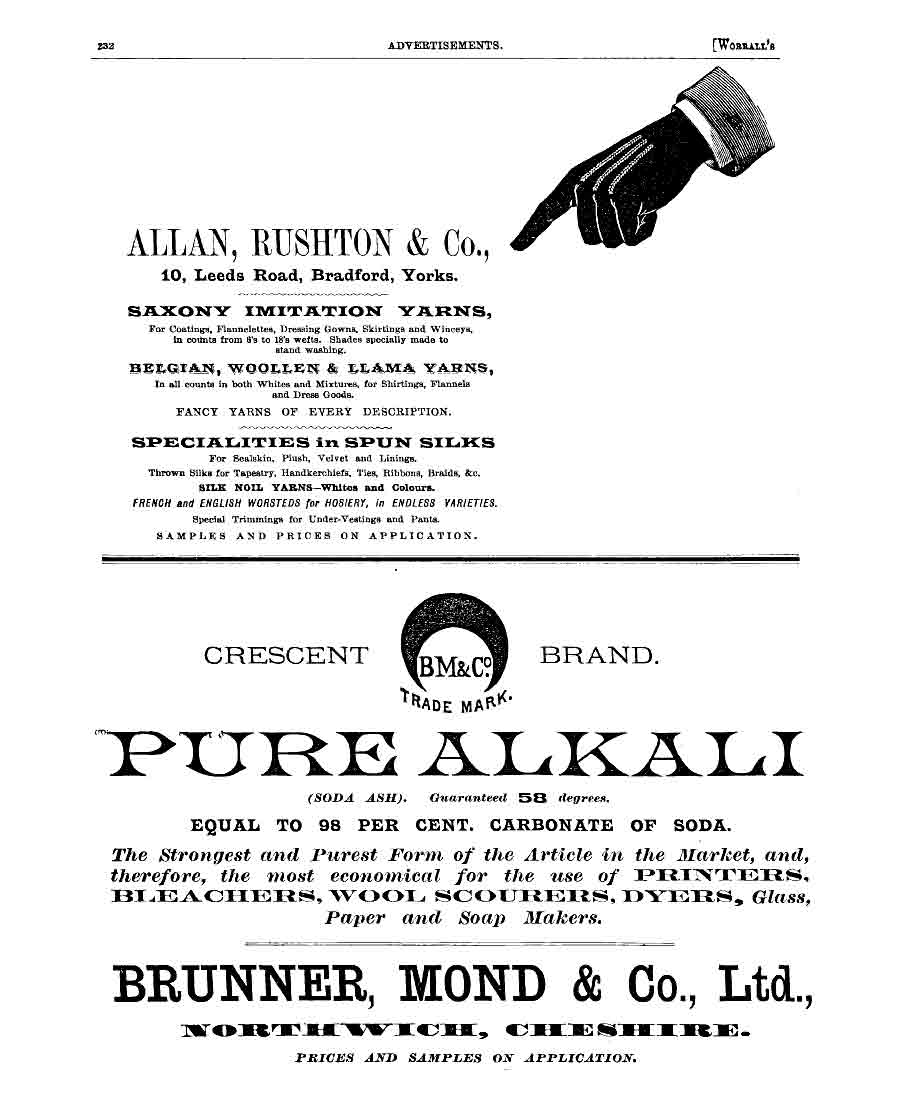 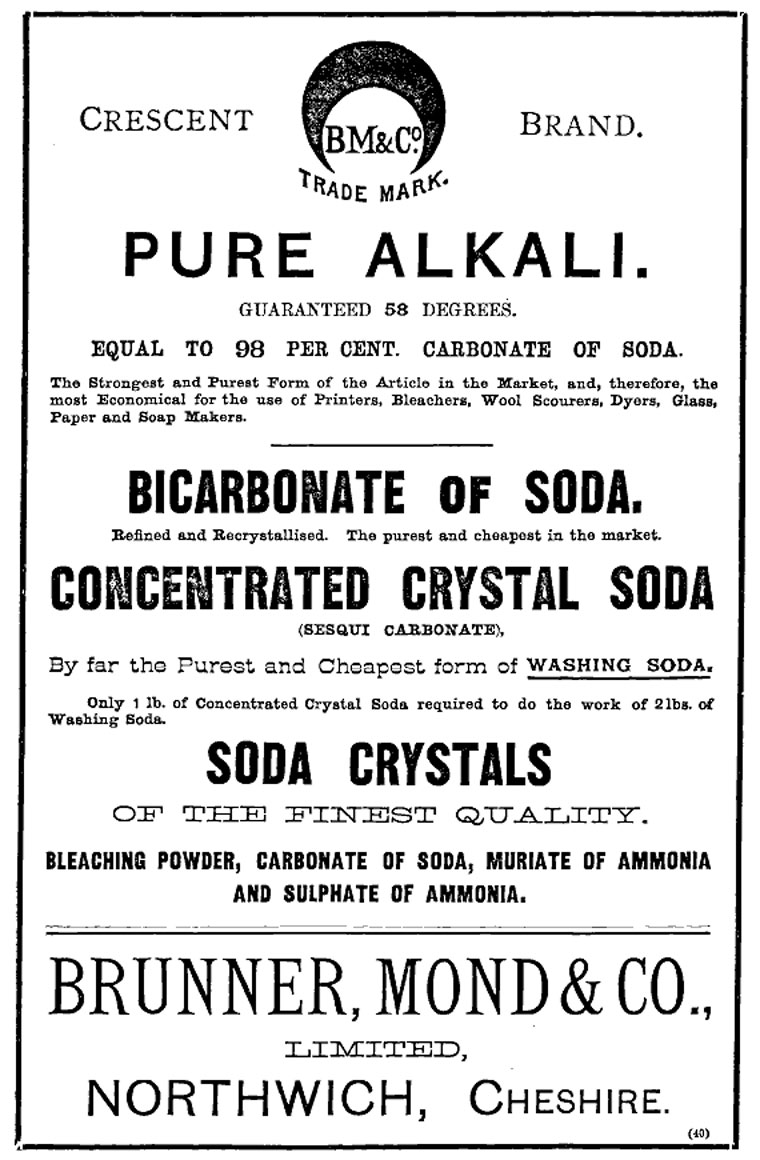 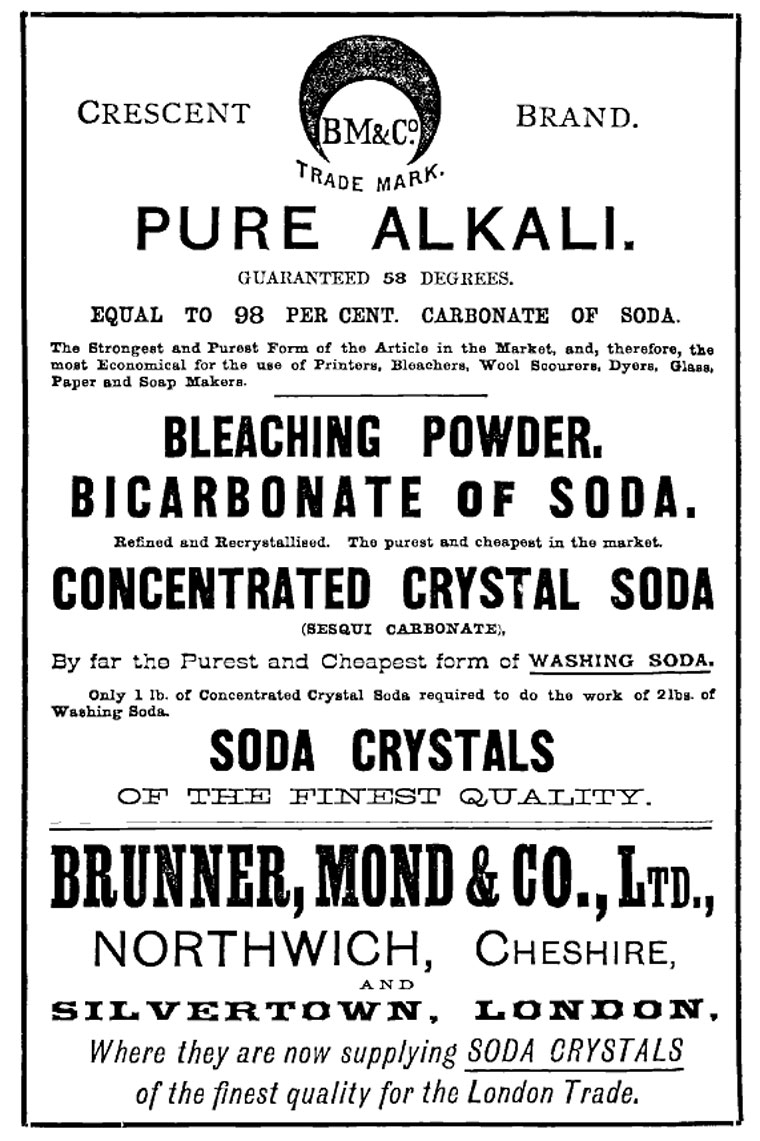 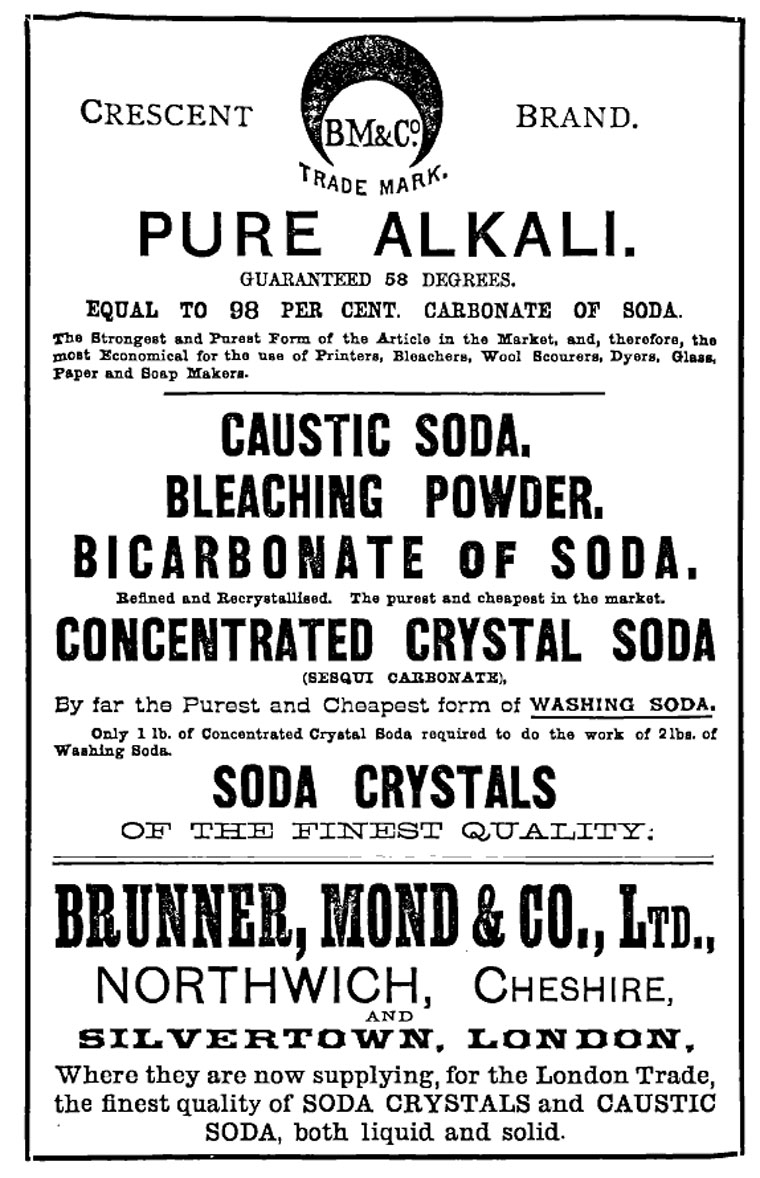 1872 John Tomlinson Brunner and Ludwig Mond set out to find a site for an ammonia works in the Cheshire salt district; they selected Winnington near Northwich for the first plant, which was followed later by 3 other sites in the area[1]

1873 The company was formed by John Brunner and Ludwig Mond, who had met whilst working at Hutchinson's alkali works at Widnes. Without sufficient capital to set up their own establishment they acquired a sleeping partner, the wealthy engineer Charles Holland. Between them they raised £16,000, sufficient to purchase Winnington Hall in Cheshire, which was well served by railway and the River Weaver.

1874 They built Winnington Works in Northwich, Cheshire, and produced their first soda ash in 1874. The company was formed to make soda ash by the new ammonia soda process, for the cotton industry. It manufactured alkalis from the vast salt deposits in northwest England, and ammonia and fertilisers in the northeast of the country.

1881 The company was registered on 24 February, to take over the business of the firm of this name as alkali manufacturers. [2]. John Crosfield, from their largest customer, was the first chairman. Floated as a public company with a capital of £600,000.

The combination of Mond's technical genius and Brunner's business acumen enabled them to succeed when others operating a similar ammonia-soda process either failed or were acquired by Brunner Mond.

1881 Brunners took over the Sandbach works of Richards, Kearne and Gasquoine (est. 1873) which Mond had already for three years been managing on a contract basis.

1886 Installed coke ovens at Winnington to make ammonia for their soda plant.

1887 Process for recovery of chlorine from waste calcium chloride was introduced by Mond, using waste zinc oxide from lead production in Wales, with electrolysis of the resultant zinc chloride.

1895 They acquired the ammonia-soda plant in Middlewich of Murgatroyd and Co. Ltd, reopening it in 1897 after reconstruction.

1897 Another rival firm at Middlewich, the Cheshire Alkali Co., who had erected works in 1887, closed down their plant in 1897 by arrangement with Brunners.

1897 Brunners induced Bell Brothers to cease alkali production at their Port Clarence plant. Brunners subsequently bought it and demolished the works soon after 1900.

1900 Acquired the plant of Bowman, Thompson and Co. Ltd (started at Lostock Gralam in 1891 by two former managers of the United Alkali Co.); after reconstruction the plant resumed ammonia-soda production in 1907.

During the early 20th century the company built managers' and workers' houses in Hartford.

1911 Brunner, Mond and Co acquired complete control of the soap manufacturers Joseph Crosfield and Sons of Warrington and William Gossage and Sons of Widnes[3].

WWI Brunner Mond modified several of their plants in order to produce ammonium nitrate for munitions. As well as purifying TNT for government use, the firm provided synthetic phenol for conversion to the alternative explosive, picric acid.

1917 19th January: The TNT purification plant at Silvertown was destroyed in an explosion which also killed many people and caused substantial damage in the surrounding area[5]

1919 Brunner, Mond and Co sold its shares in soap manufacturers Joseph Crosfield and Sons of Warrington and William Gossage and Sons of Widnes to Lever Brothers[6].

1920 Brunner, Mond and Co took over Castner Kellner Co by exchange of shares[7].

1920 The company, amidst considerable public controversy, purchased from the Ministry of Munitions, the synthetic ammonia site at Billingham together with some information as to the German development of the Haber process. They formed Synthetic Ammonia and Nitrates Ltd. to carry on the work of erecting and operating a factory and plant to extract nitrogen from the air. [8]

1926 Brunner Mond merged with three other British chemical companies to form Imperial Chemical Industries, an organisation that grew to become one of the world's largest and most successful companies. Brunners ammonia-soda plants became the nucleus of the Alkali Division.

By 1927 Brunner Mond had installed a vast plant at Billingham on the River Tees (at their Synthetic Ammonia Works) for the production of nitrates from the air.

1991 Brunner Mond Holdings Limited was formed by the break-off of the UK and Kenyan soda ash businesses from ICI. This saw the recreation of the original Brunner Mond as an independent company.

1998 the company acquired the soda ash production capabilities of Akzo Nobel in The Netherlands to form Brunner Mond B.V., now a wholly owned subsidiary company of the group.