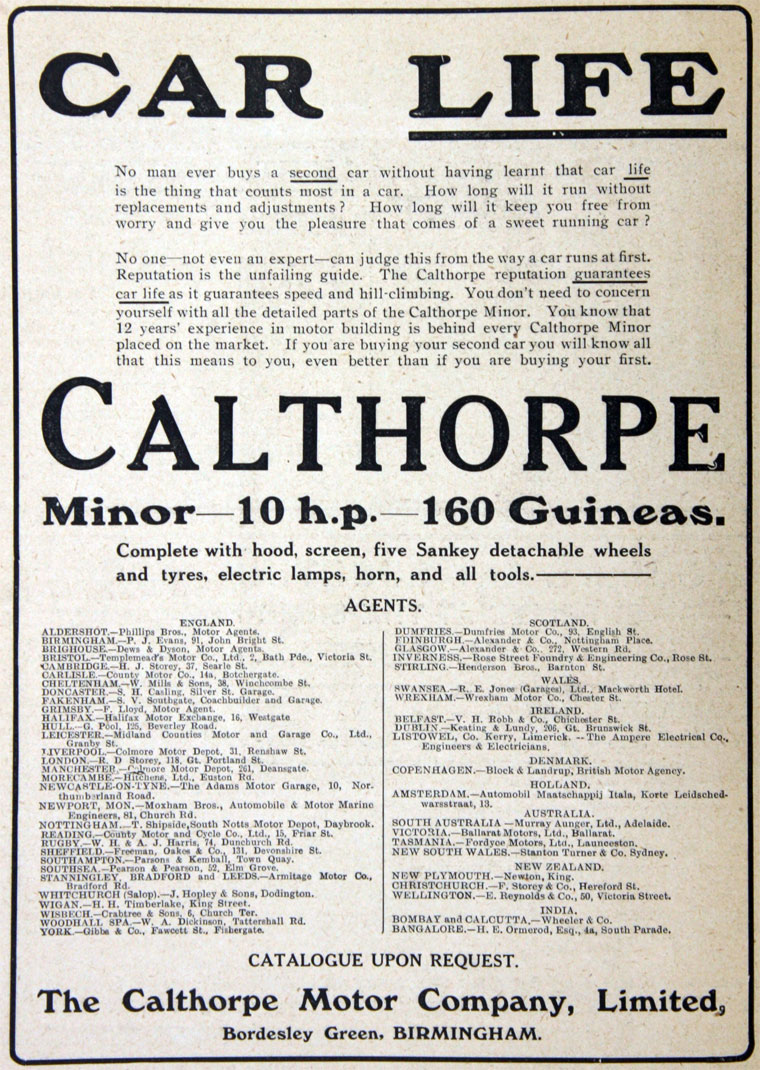 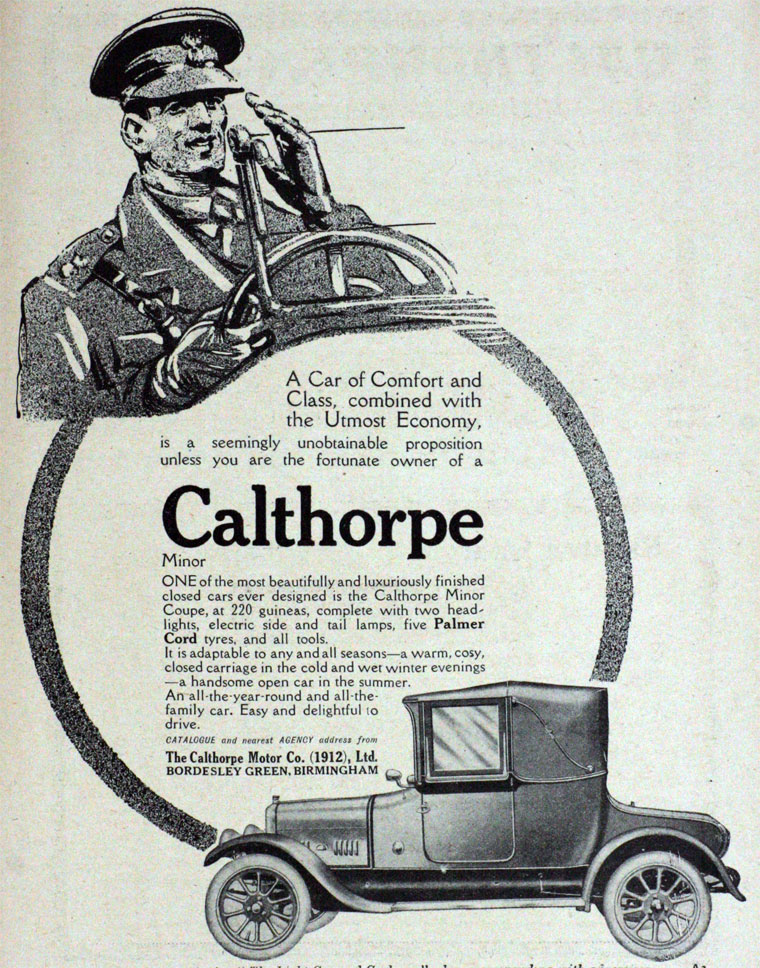 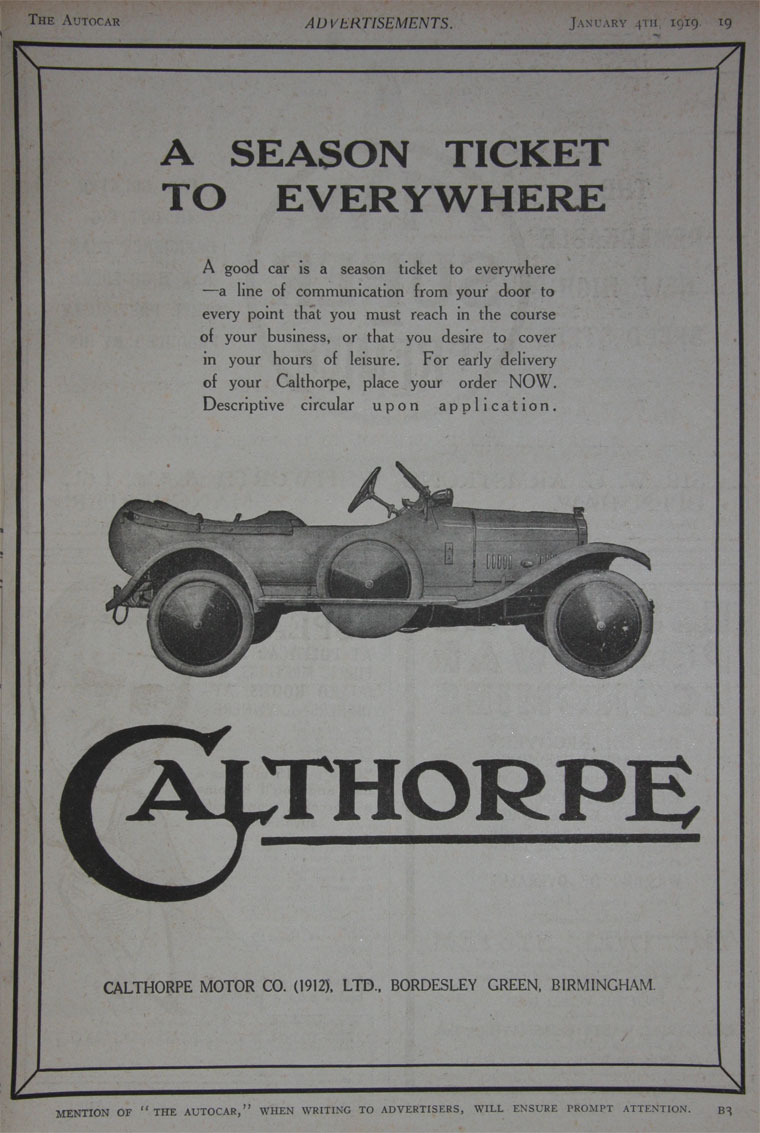 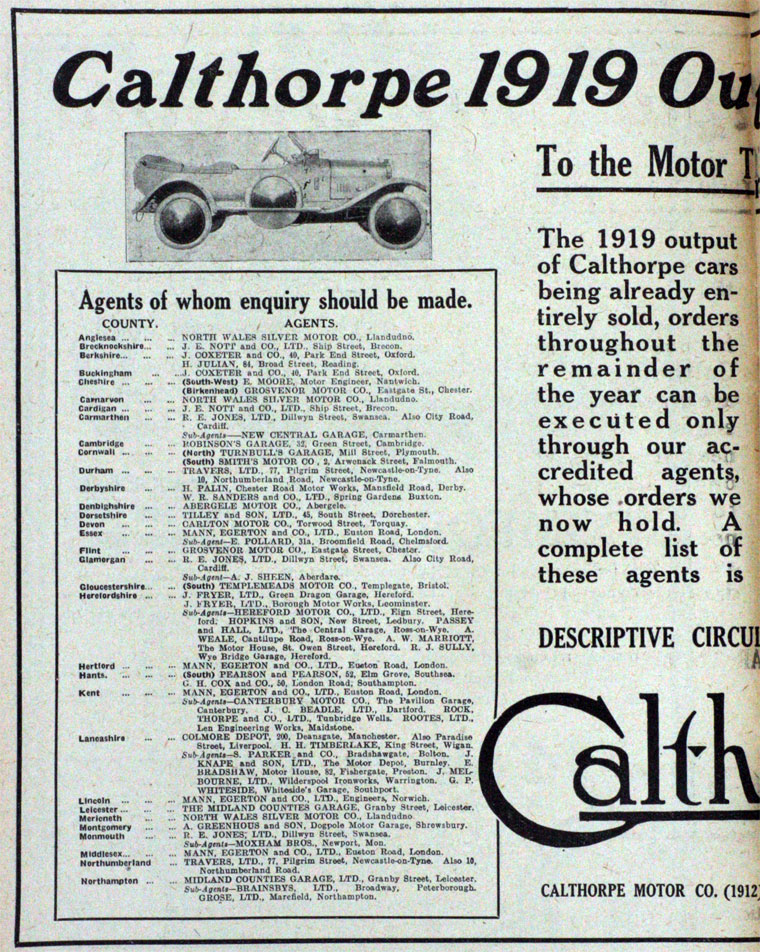 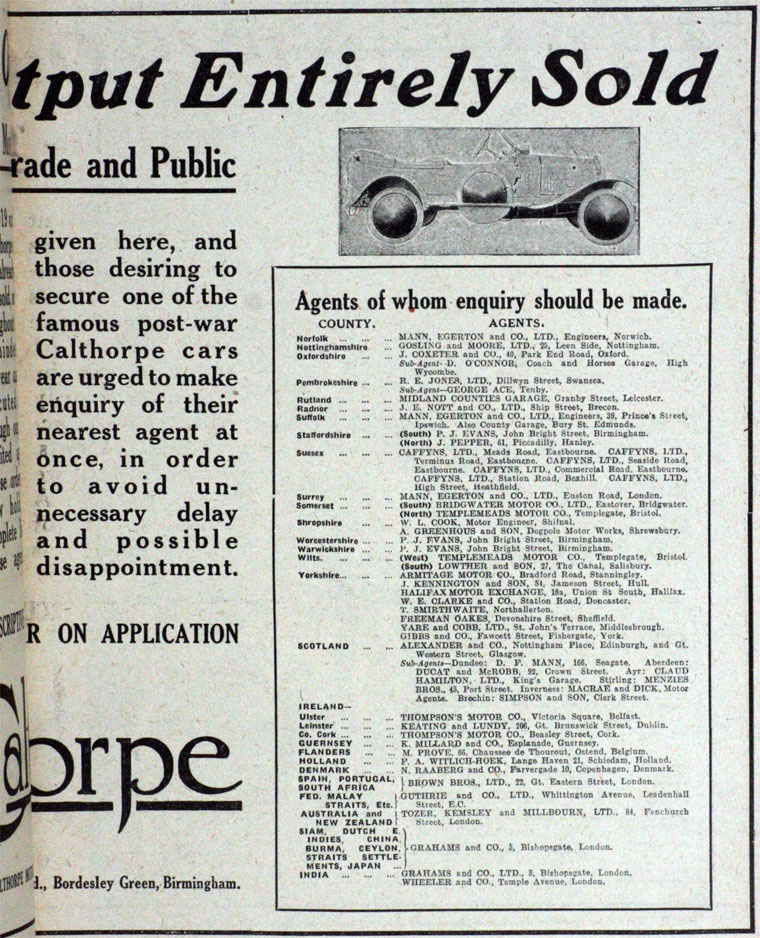 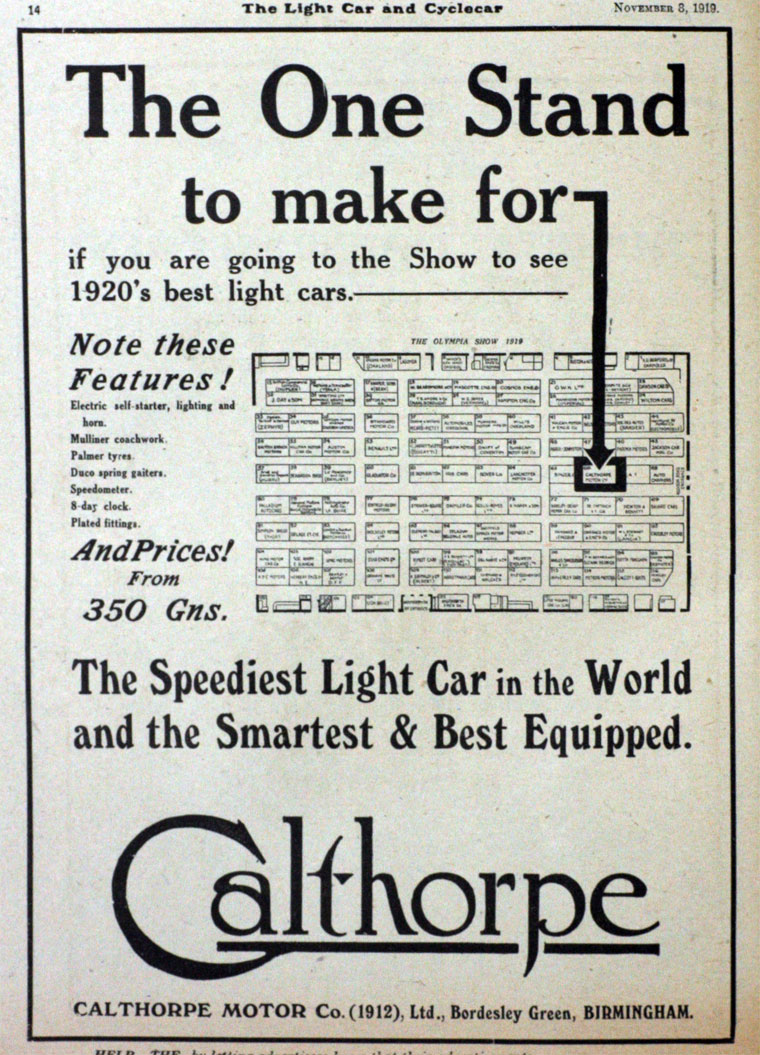 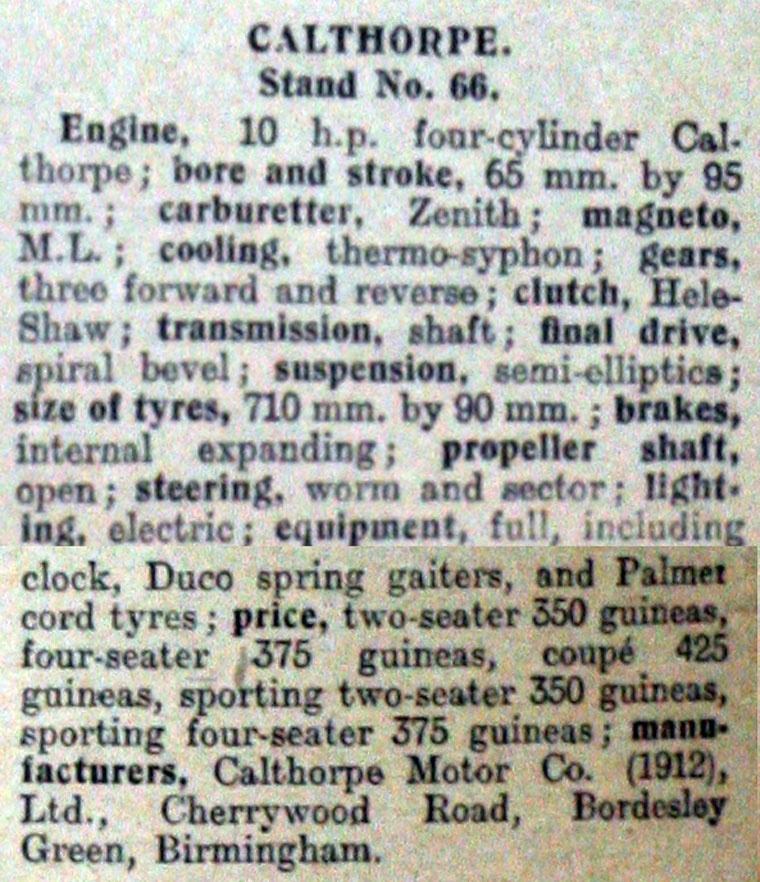 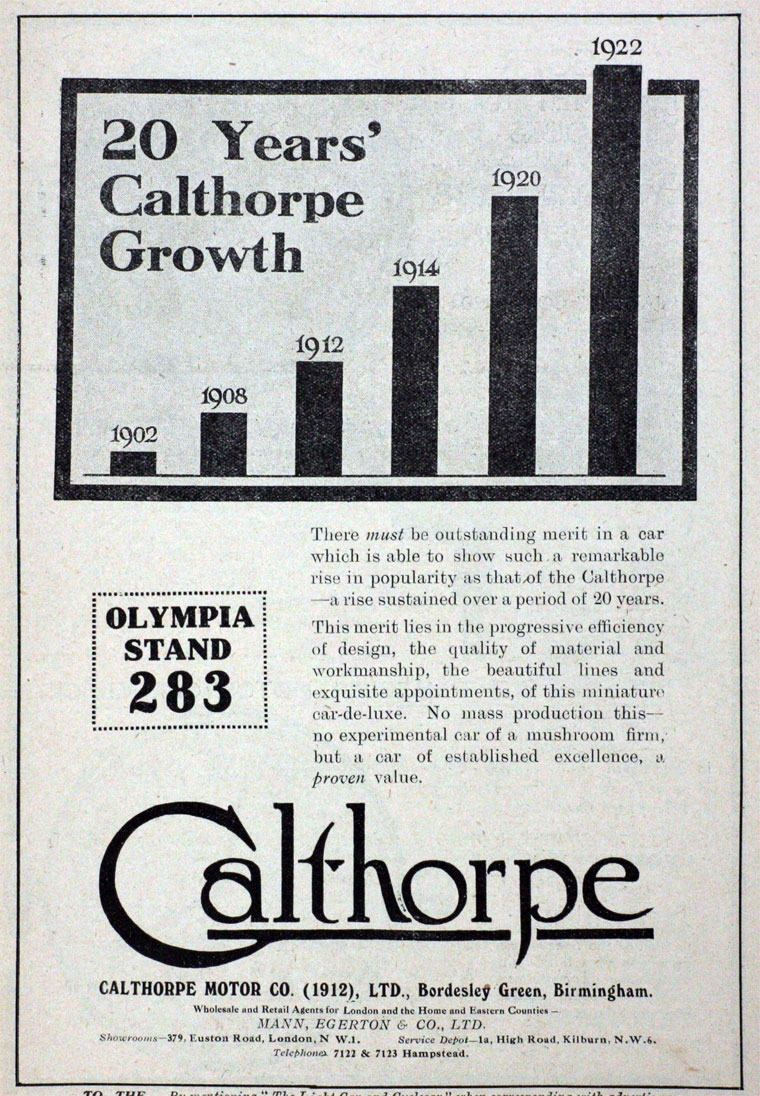 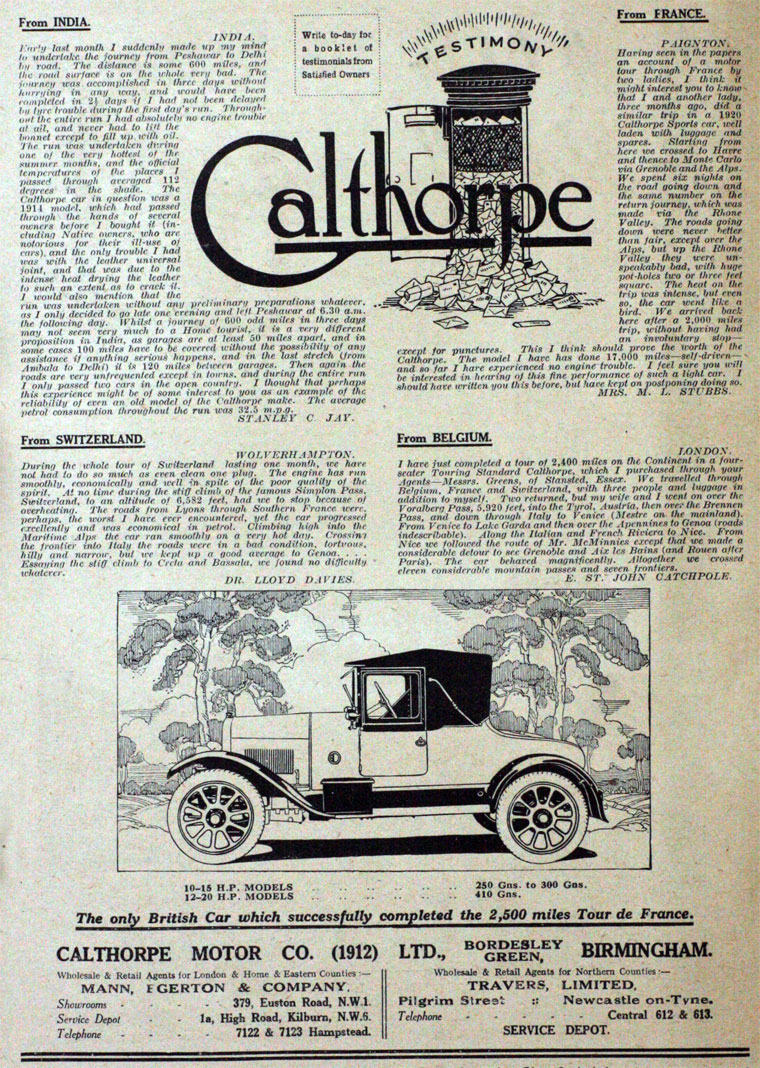 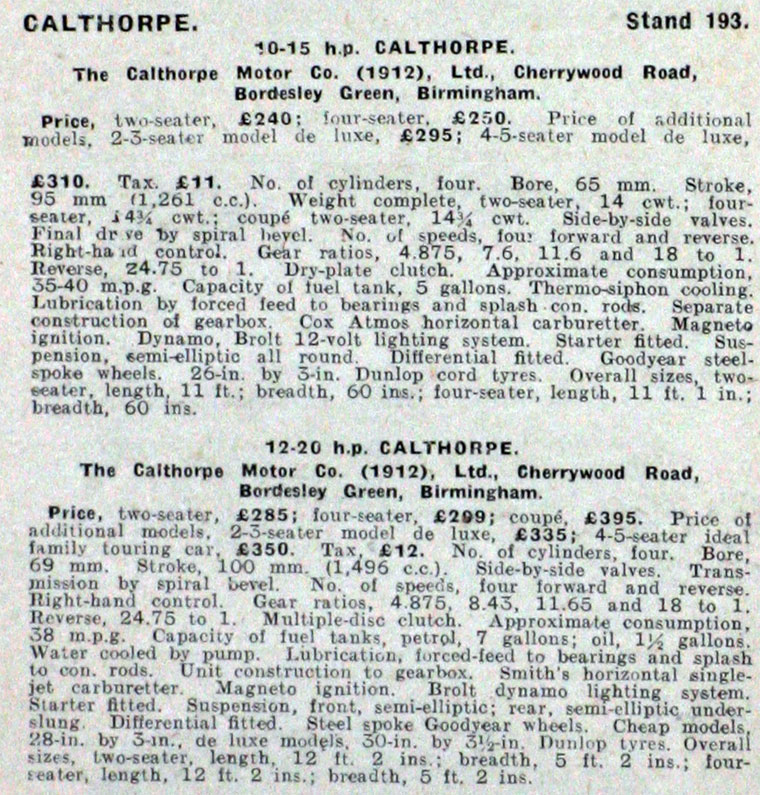 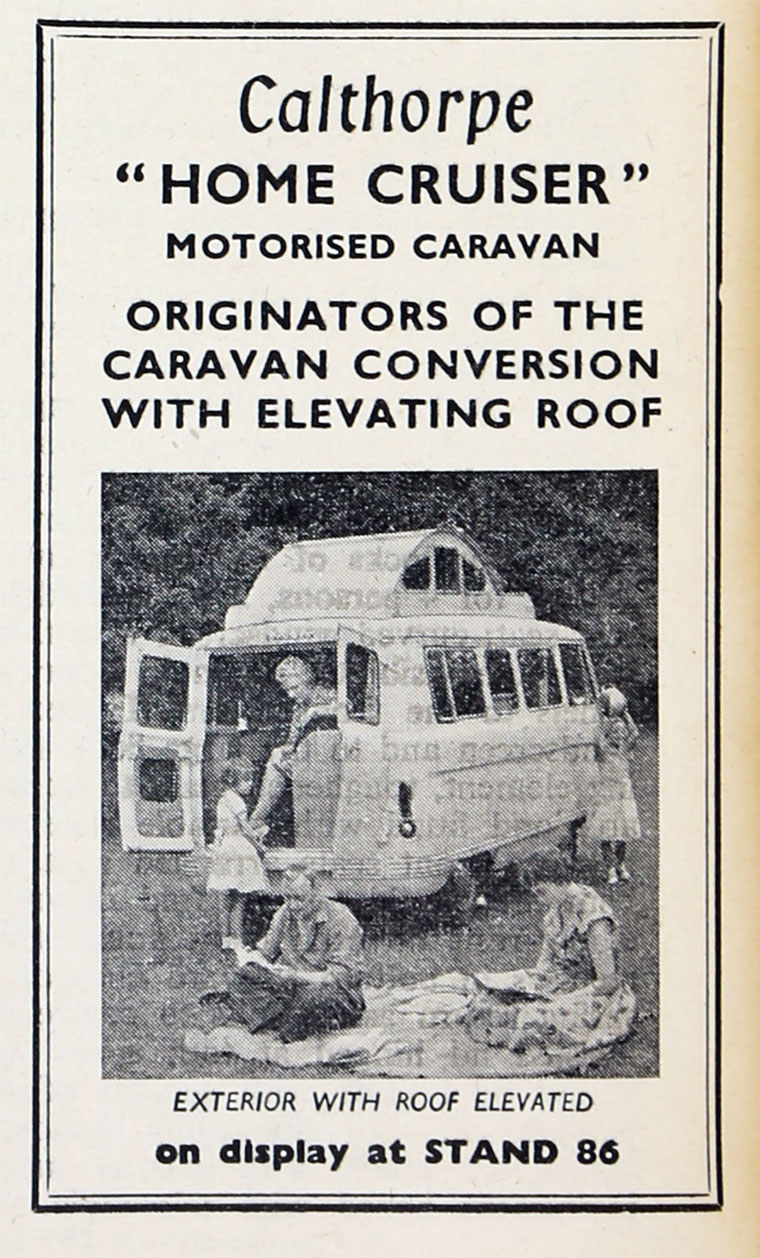 Calthorpe Motor Co of Cherrywood Road, Bordesley Green, Birmingham made cars and motorcycles from 1904 to 1932.

1894 The company started out as a Birmingham bicycle maker run by George W. Hands and Arthur Cake which traded as Hands and Cake

1901 The Bard company was in difficulties and was wound up the following year. The business was carried on by the Minstrel Cycle Co initially in Bishop Street.

1906 The company became the Minstrel and Rea Cycle Co, which introduced the Calthorpe motorcar.

At some point the car-making activity was moved to Cherrywood Road, leaving the cycle business at Barn Street.

They briefly made some larger cars but it was in the light car field that they specialised using proprietary White and Poppe engines. The cars were successfully raced in France in the Coupe de l'Auto series.

1914 The Calthorpe Motor Co Ltd was wound up voluntarily. George William Hands, of Temple Lodge, Trafalgar-road, Moseley, Birmingham (who was chairman) and Harry Joyce, of 1, Park-road. Moseley were appointed Liquidators of the Company.[4]

WWI The factory was turned over to making hand grenades

1919 After the war, the large cars were dropped but the Minor re-appeared with a slightly larger engine of 1,261cc.

1920 A Mr J. Mathews was in charge of production and a target of making 50 cars a week was set. The cars continued to have excellent coachwork made by the Calthorpe subsidiary company of Mulliners (acquired in 1917) who had an adjacent factory. Sporting activity continued with Woolf Barnatto, amongst others, racing at Brooklands. Hands briefly left the company in 1922 to set up his own Hands make of cars in the Calthorpe motorcycle factory in Barn Street, Birmingham, but returned in 1924. Whilst away he developed the six cylinder overhead camshaft engine that was fitted for a short time to the 12/20. The Hands cars seem to have used Dorman engines.

The days of the high quality light car were coming to an end by the late 1920s and sales of the fairly expensive Calthorpe were declining. A receiver had to be appointed in 1924[5] but he kept production going for a while.

1925 The range consisted of 11 different models; the company exhibited at the Olympia Show[6]

1925 A final fling with the 1925 15/45 six cylinder 2 litre car was really too late and production of the cars had virtually ceased by 1928. About 5,000 cars were made in the post-war period, pre-war production is uncertain. Very few cars have survived.

There was also a range of Calthorpe Motorcycles (see below) and these carried on being made after car production had ended.