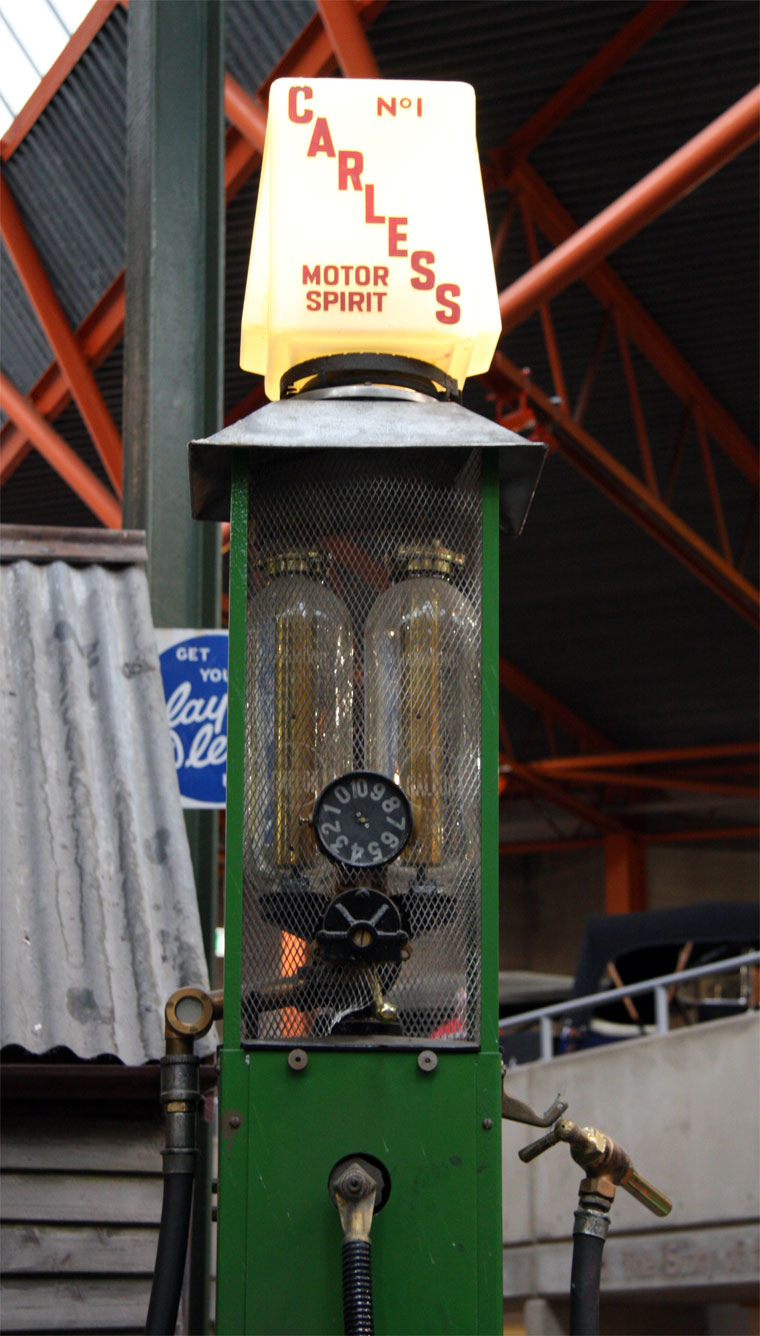 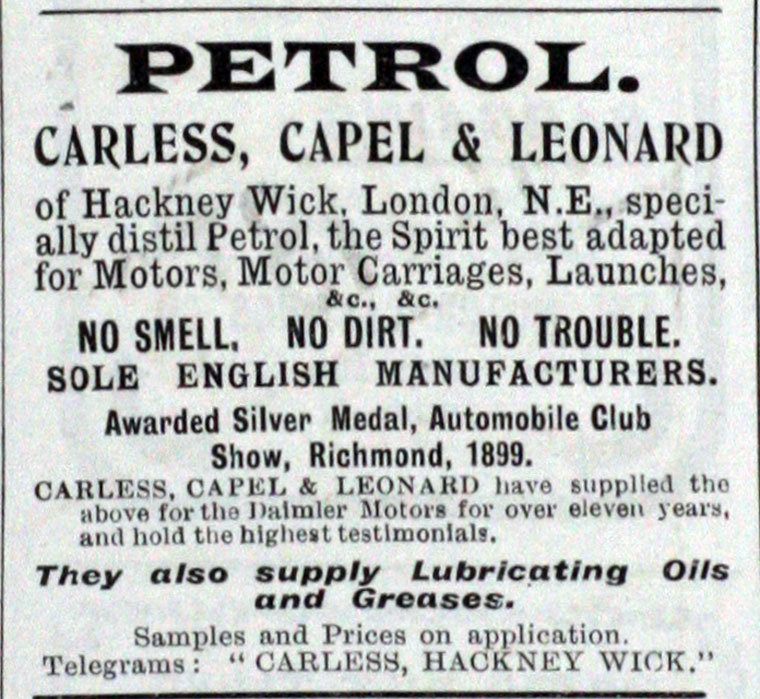 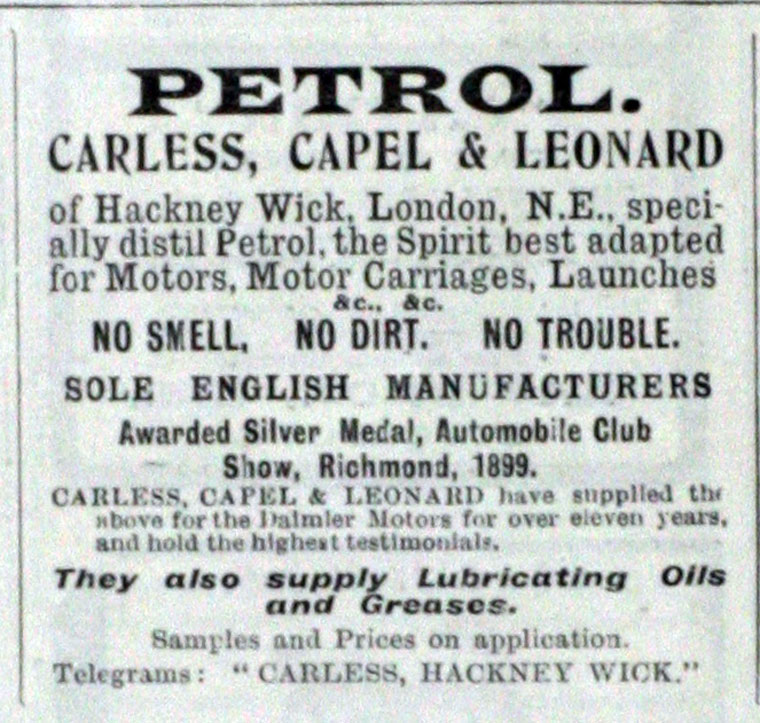 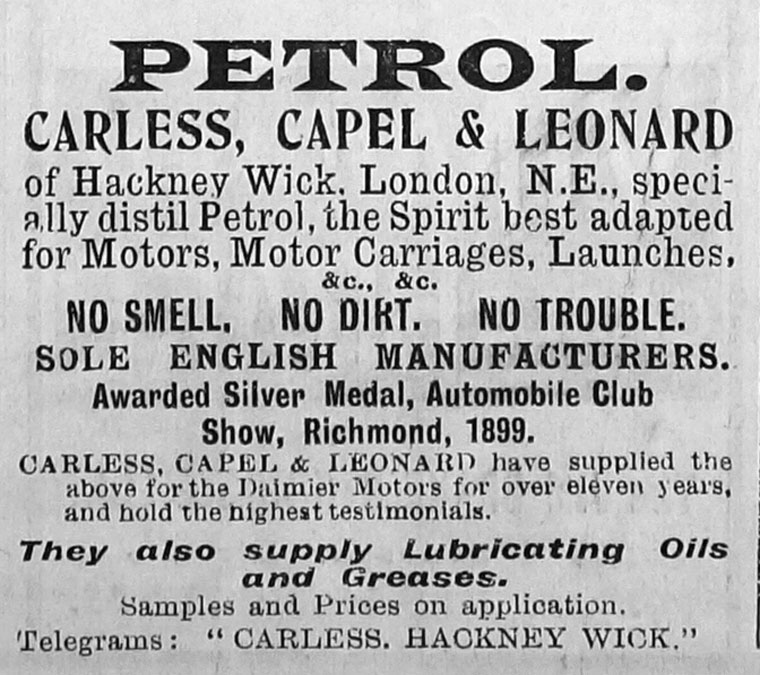 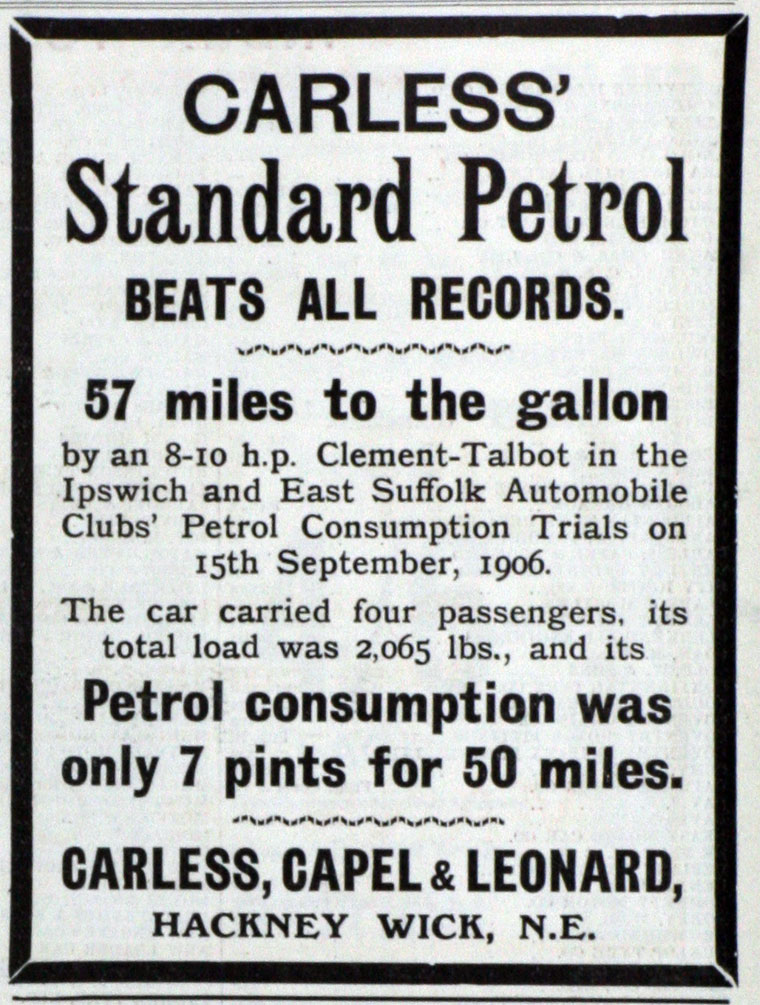 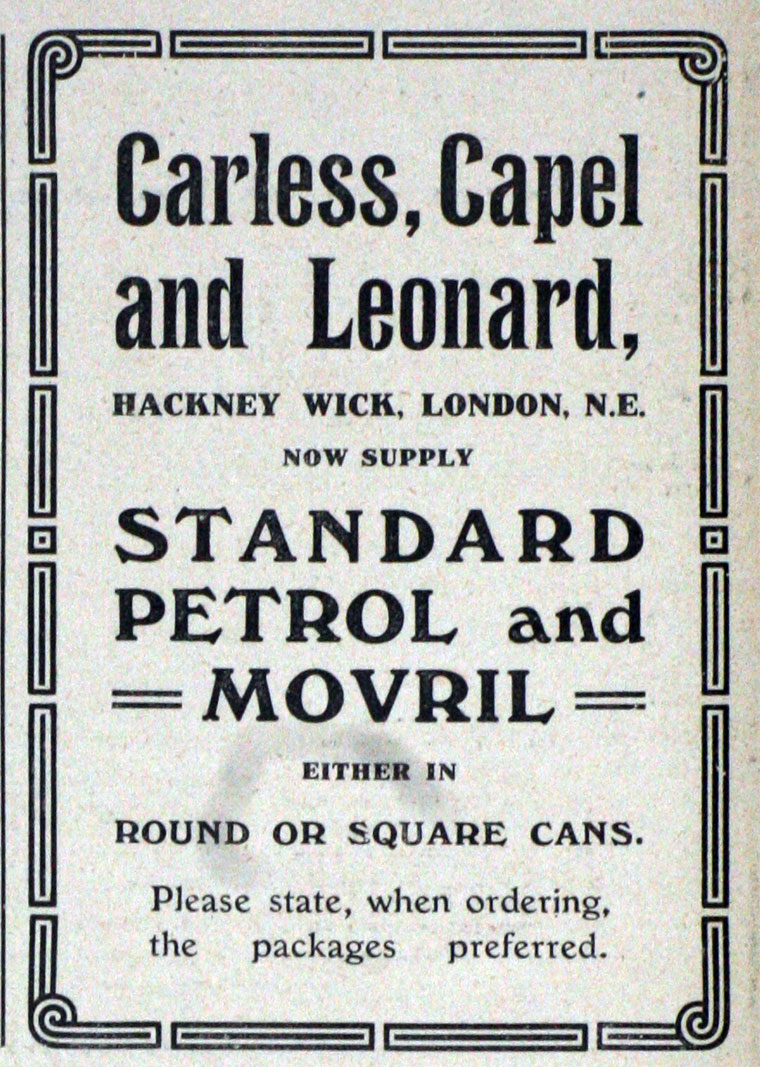 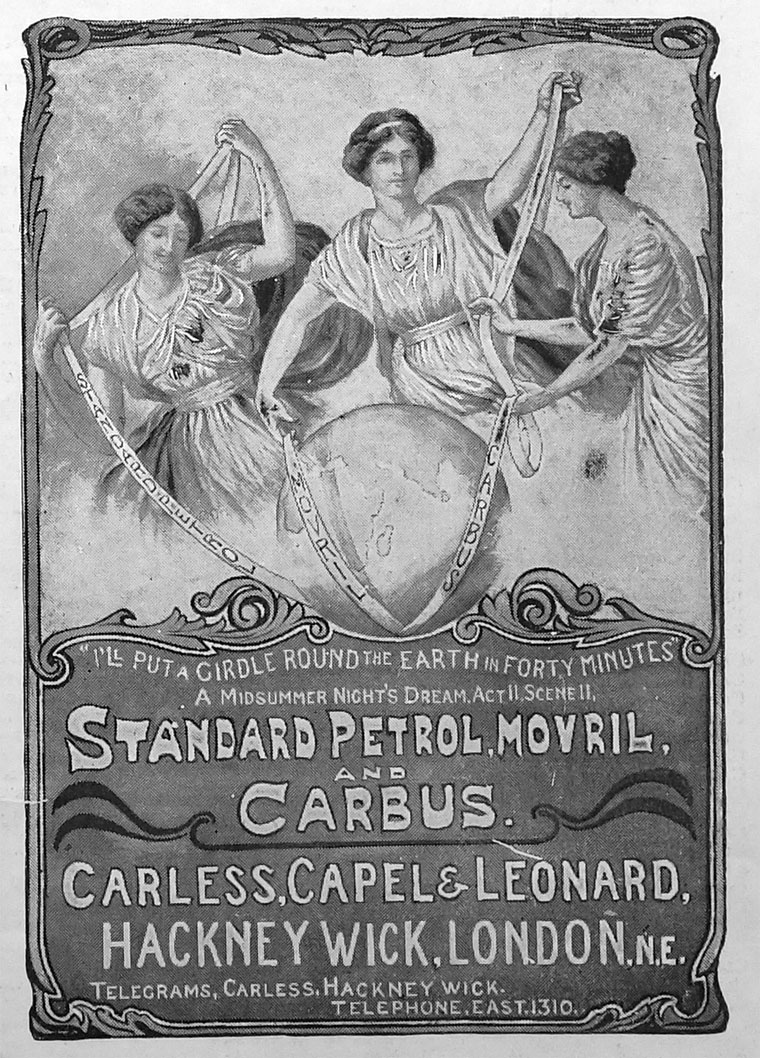 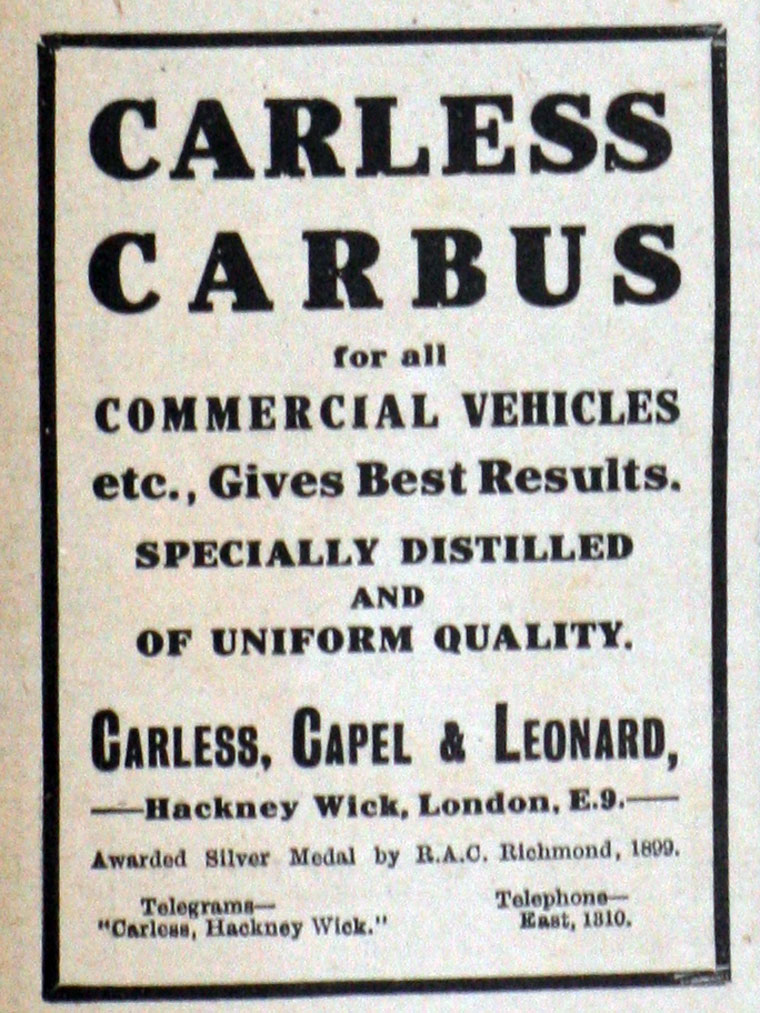 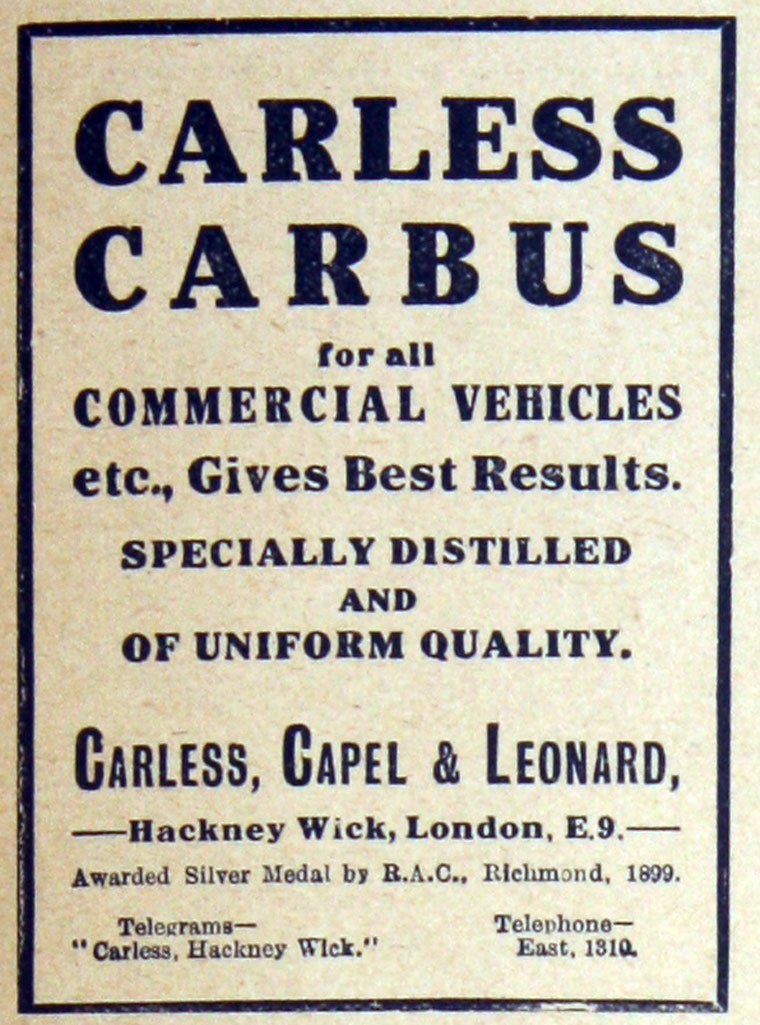 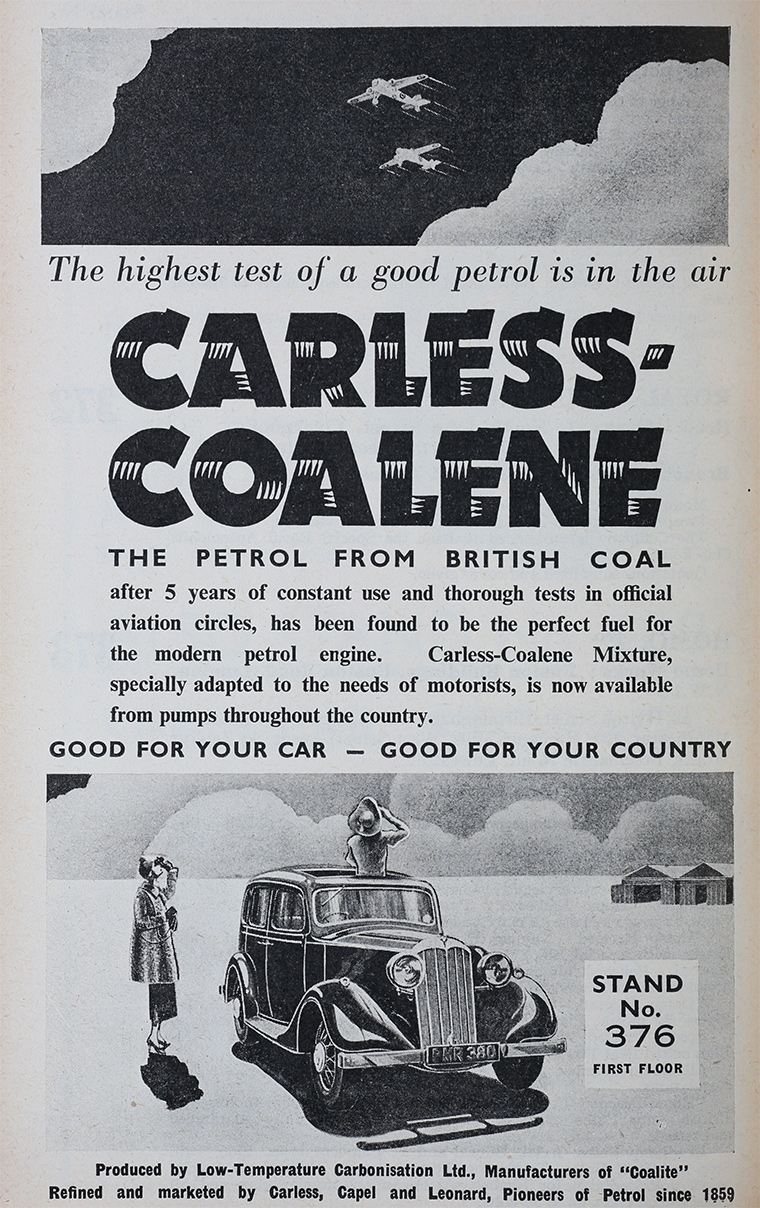 1859 Company established by Eugene Carless. [1] for distilling and refining mineral oil at a plant in Hackney Wick.

1860 William George Blagden joined as a partner, remaining with Carless for ten years. The company name was Carless, Blagden and Co.

1870 After the dissolution of the partnership, a brief partnership was made with George Bligh Capel.

1870 Dissolution by mutual consent of the Partnership between Eugene Carless and William George Blagden, under the style and title of Carless, Blagden and Co., lately carrying on business at Hope Chemical Works, Hackney Wick, Bow, Middlesex. All debts received by .... Messrs. Carless, Capel, and Co., of Hope Chemical Works aforesaid.[2]

Carless Capel became the leading distillery in Britain for the newly imported American crude oil, and made advances in refining coal tar and shales, from which derived benzoline, paraffin oil, burning naphtha and carburine.

1890 A major fire severely damaged but did not totally destroy the Hope works.

1893 Frederick Simms suggested the trade name of Petrol, to be used for a motor launch spirit; this was agreed by William John Leonard but it was not accepted for registration as a trade mark as it was regarded by the Registrar as a descriptive word.

1895 Leonard negotiated the purchase of the nearby Pharos Chemical Works from Leon Clerc, together with his interests as a refiner, distiller and importer of a range of products, including petroleum.

Marketing petrol firmly linked the firm with the motor car - Carless Capel and Leonard supplied their new fuel for the Emancipation Run to Brighton in 1896.

At the turn of the century Carless Petrol was still virtually the only British source of highly refined motor spirit,

1907 Further expansion at Hackney Wick took place with the purchase of the Lea Chemical Works.

1920s The Leonard family remained active in the firm and took up new products in the 1920s such as Coalite's by-products, supplied as a fuel to the RAF from 1934, though problems with coal mining caused production to cease in 1939.

During World War II the firm's output included the production of TNT. The works suffered bomb damage especially the Lea works, hit in 1940.

After the war it became clear to the directors that fuel distribution was in decline, while gas production from coal was a shrinking market, so Carless placed the emphasis of its production on special boiling point spirits and on securing its own feedstocks.

1948 Converted into a private limited company. [7]

1973 Carless Petroleum was established as subsidiary. Carless was also involved in on-shore oil/gas fields at Humbly Grove and Wytch Farm.

1984 Petrol House was finally sold. A distribution depot remained at Bow, on a site used by the Company since the 1930s.

1988 Carless was taken over by Kelt Energy, who proceeded to sell the whole of its lubricants interests to Kuwait Petroleum, who thus inherited the Filtrate plant at Knowsthorpe Gate, Leeds.[12]

1989 The Company was taken over and broken up. A new company, Carless Refining and Marketing, was established as a wholly owned subsidiary of Repsol at Romford.