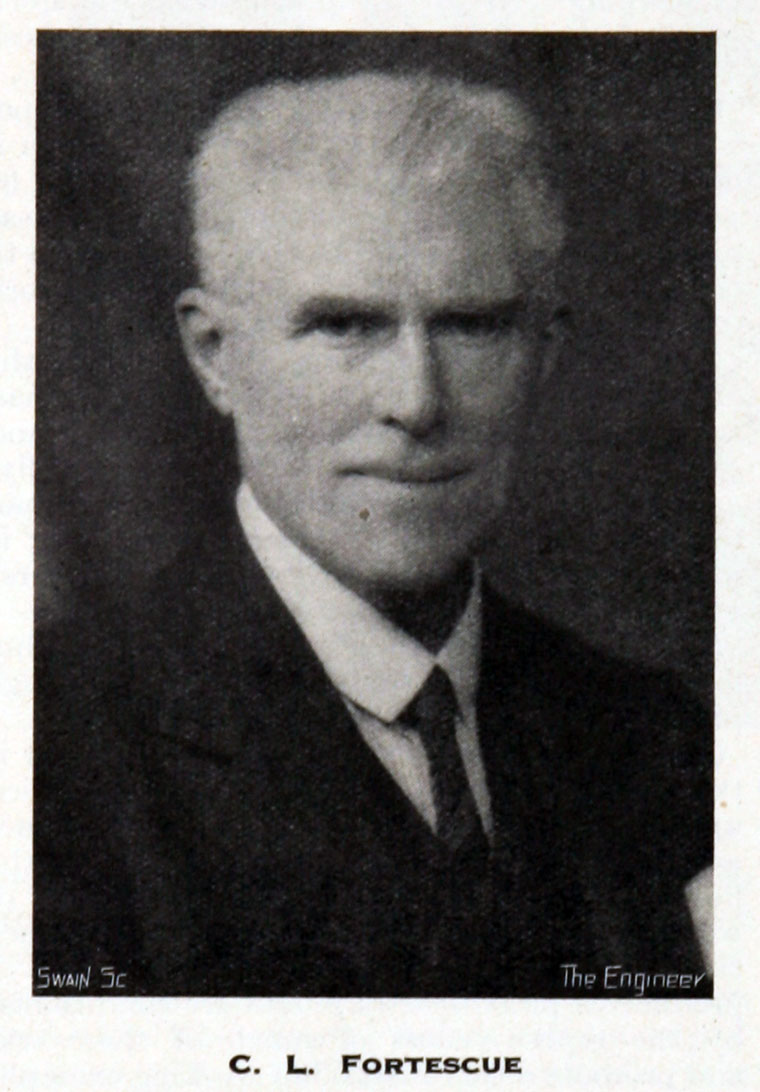 Educated Oundle and at Christ's College Cambridge where he won a scholarship to read Natural Sciences and graduated with a First.

1906: Civilian Instructor in Applied Mechanics and Electro-Technics at the H.M. Gunnery and HM Torpedo School (H.M.S. Vernon) in Portsmouth.

1914-18: Volunteered for service on the outbreak of war, and was posted to H.M. Signal School, Portsmouth and attached to the Wireless Telegraphy Department, H.M.S. Vernon.

1922: Professor of Electrical Engineering in the University of London at the Faculty of Engineering of Imperial College, then known as the City and Guilds (Engineering) College.

1942-43: President of the Institution of Electrical Engineers.

Long-time member of the Institution of Electrical Engineers, serving on the Wireless Committee member of Council and eventually President. Sometime Member of the Institution of Civil Engineers, of the Physical Society of London and of Sub-Committees “D” and “D 1” on Thermionic Valves of the Radio Research Board of the Department of Scientific and Industrial Research.

Presented numerous papers before the Institution of Electrical Engineers and the Physical Society, and was the author of two books: Wireless Telegraphy, (1913) and The Naval Electrical Manual (1928).

PROFESSOR CECIL LEWIS FORTESCUE, O.B.E., M.A., Emeritus Professor of Electrical Engineering both of the University of London and of the Imperial College of Science and Technology, and a Past President of The Institution, died on the 22nd September, 1949, at his home at Keyhaven, Hants, where he had lived since his retirement only three years ago. His death came as a great shock to old colleagues and students alike; he appeared to be as energetic and active as ever when he retired, and it seemed likely that he would enjoy many years of happiness in quiet work and in the pursuits of sailing and gardening, which he loved so much. The impression of undimmed energy was strengthened by the fact that he continued teaching on a part-time basis at University College, Southampton, where his experience and skill were greatly appreciated.

He was born in 1881 at Barnack, Northants, and was educated at Oundle and Christ's College, Cambridge, where he played a prominent part in college activities, especially on the river. A first-class honours degree in the engineering tripos was followed by practical experience in Siemens's dynamo works at Stafford, after which he was appointed to H.M.S. Vernon as Instructor to Officers at the Torpedo School and at Whale Island, and later became Professor of Physics at the Royal Naval College, Greenwich. When the 1914-18 War broke out he immediately offered his services to the Admiralty and was posted to H.M. Signal School, Portsmouth, for wireless telegraphy duties. At the end of the war he returned to Greenwich, but stayed only until 1922, when he was appointed Professor of Electrical Engineering in the University of London at Imperial College, and it was there that he found his life's work. His greatest interest lay in teaching, and many hundreds of his old students will remember with gratitude and affection the unremitting energy and attention which he gave to their work in his department.

It was not only their professional work, however, that interested Fortescue. His old love of the river drew him whenever the College crews were rowing, and it had to be a very important engagement that would keep him away from a Morphy Cup race. Athletics, the Dramatic Society and many other college activities also interested him keenly, and it can be said with truth that throughout his career he was single-minded in his efforts to promote the well-being of the students.

The Deanship of the City and Guilds College—the engineering section of Imperial College—has, since the retirement of the late Prof. W. E. Dalby in 1931, been held in rotation by the Heads of the Engineering Departments, and it fell to Fortescue to occupy the position twice. It was no surprise to those who knew him that he threw himself into the manifold duties of the office with energy and enthusiasm, and no point of detail was too small for his personal attention. The many problems relating to the safety and convenience of students and staff which were thrown up by war conditions were dealt with in meticulous detail, and it was largely owing to his untiring efforts that the work of the College in those difficult days proceeded so smoothly. All this work, however, was paid for by a restriction of his research activities, and it was a matter of regret to him that so little time was left for the scientific studies that he was so eager to undertake.

In spite of this, however, he was the author of a considerable number of papers and articles which were published in the Journal of The Institution of Electrical Engineers, the Journal of Scientific Instruments and other publications, and he also wrote "Wireless Telegraphy" (1912) and "The Naval Electrical Manual (1928). He contributed much in writing and discussion to the problems of professional education, and his advice and help were of the greatest value both to this Institution and to The Institution of Civil Engineers.

His election as President of The Institution of Electrical Engineers came as a fitting recognition of a career devoted to raising the standards of education and to the welfare of the younger members of the profession, and was greeted with special pleasure by his academic colleagues.

PROFESSOR C. L. FORTESCUE, Emeritus Professor of Electrical Engineering, Imperial College, who died on September 22nd, will be remembered with affection by more than one generation of students and by a host of friends made during a lifetime devoted to the professional education of electrical engineers.

Born on January 15, 1881, Cecil Lewis Fortescue was the eldest son of the late Mr. Lewis Fortescue, of Barnock, Northamptonshire. He was educated first at Oundle School and then at Christ's College, Cambridge, where he was a Natural Science Scholar and graduated with a first-class in the Mechanical Sciences Tripos. After serving a two-year post-graduate apprenticeship at what was then the Siemens Dynamo Works in Stafford, C. L. Fortescue served on the firm's staff for a year to gain further experience.

His subsequent appointment as an instructor in electrotechnics and applied mechanics at H.M. Torpedo and Gunnery Schools, Portsmouth, marked the beginning of a long and distinguished teaching career. He was Professor of Electrical Engineering at the Royal Naval College, Greenwich, from 1911 to 1922, apart from a period during the war when he volunteered for special duties and was engaged on experimental work in wireless telegraphy at H.M. Signals School, Portsmouth.

In 1922 he relinquished his appointment at the Royal Naval College, to take the Chair of Electrical Engineering at the Imperial College of Science and Technology, London. There his activities grew in number and in breadth: he was a member of many academic committees; he served on the Senate of the University of London; he was Dean of the Faculty of Engineering from 1928 to 1933, and chairman of the Board of Studies in Electrical Engineering from 1927 to 1928, and again from 1941 to 1943. None of this work prevented him from devoting close attention to the duties involved in his two terms of office as Dean of the City and Guilds College.

Nor was Professor Fortescue's horizon in any sense bounded by his academic interests within the university. He was an active member of the Institution of Electrical Engineers, serving as a Member of Council from 1925 to 1928, and as Chairman of the then Wireless Section during the 1926-27 session. Again, from 1935 to 1938, he was a Member of Council; then from 1938 to 1941 he served as Vice-President. His election as President of the Institution in 1942 was no more than a fitting tribute to his work for the Institution and in particular for higher education in electrical engineering.

He was the author of numerous papers presented before the Institution of Electrical Engineers and the Physical Society. Two of his earlier I.E.E. papers, which earned him the Institution's Wireless Premiums in 1920 and 1923, were concerned, respectively, with the design of multi-stage amplifiers using three-electrode thermionic valves, and the design of inductances for high frequency circuits. Over a considerable period Professor Fortescue has been responsible for many contributions to the technical development of wireless telegraphy and radio, particularly in the field of high frequency measurements. This aspect of his work may perhaps be appreciated, at least in part, by recalling some of Professor Fortescue's I.E.E. papers of the 1930s. For example, in 1930 he described an ammeter for very high frequencies and an instrument for projecting and recording response curves of electrical circuits. In 1935 as a result of further work in the v.h.f. band, he described a thermionic peak voltmeter for use at very high frequencies. In another paper a year later he discussed the theory and design of hot wire ammeters for frequencies of 25 to 100 megacycles per second. A resonance bridge suitable for frequencies up to 10 megacycles per second formed the subject of a final paper in 1938.

No recital of Professor Fortescue's activities can, however, do justice to his main interests, which were so closely identified with Imperial College. Nor were those interests confined to narrow academic channels. He was an enthusiastic follower of the dramatic society, of college athletic activities generally, and of rowing in particular, for he was a keen oarsman.

As might be expected, the numerous links between Professor Fortescue and many of his past students remained unbroken when he retired in 1946 and settled at Keyhaven to devote his leisure to gardening and sailing. These agreeable pastimes could not, however, absorb the whole interest of a man who had given all his energies throughout a full working life to raising the standard of education of professional engineers. It was characteristic, therefore, of the man that Professor Fortescue should volunteer, as he did, to devote a portion of his retired life to part-time teaching at University College, Southampton .