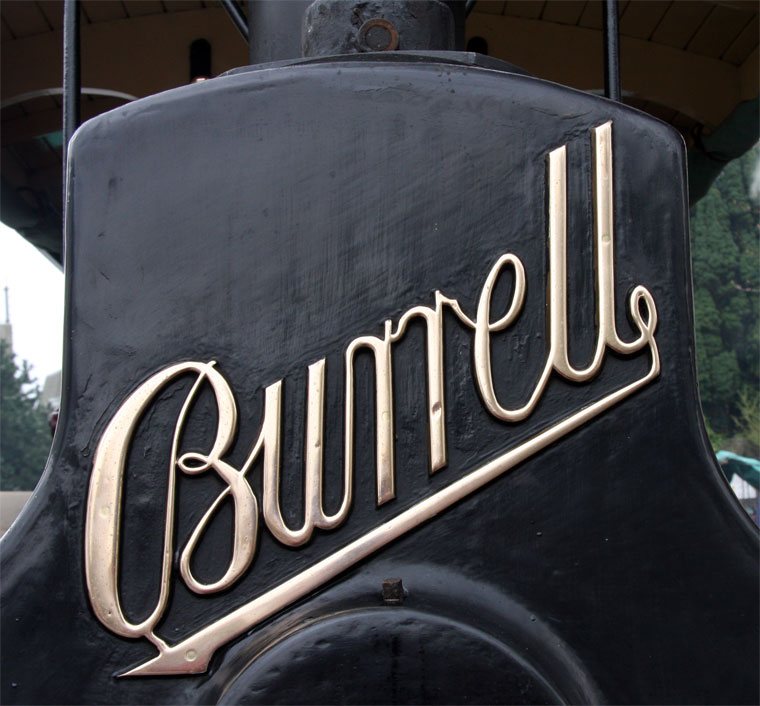 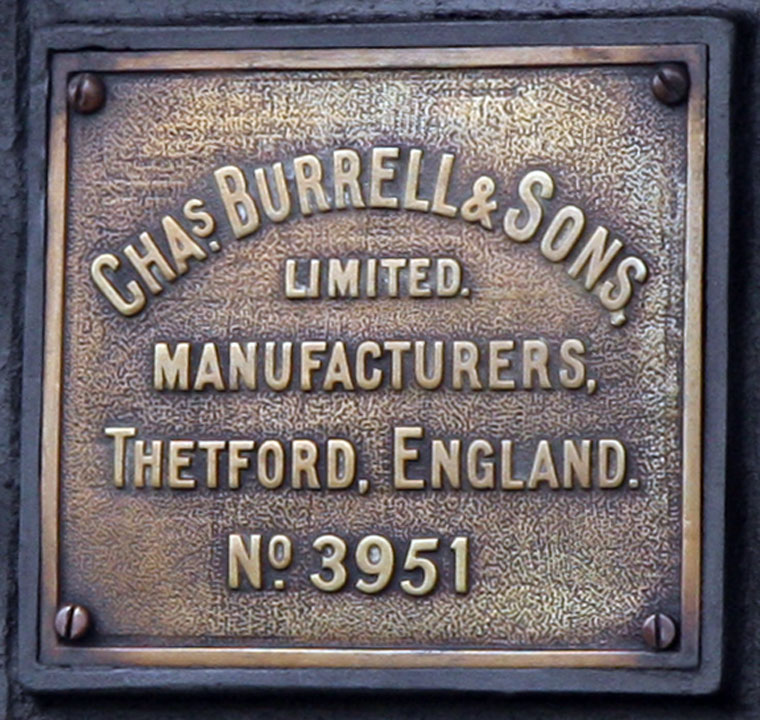 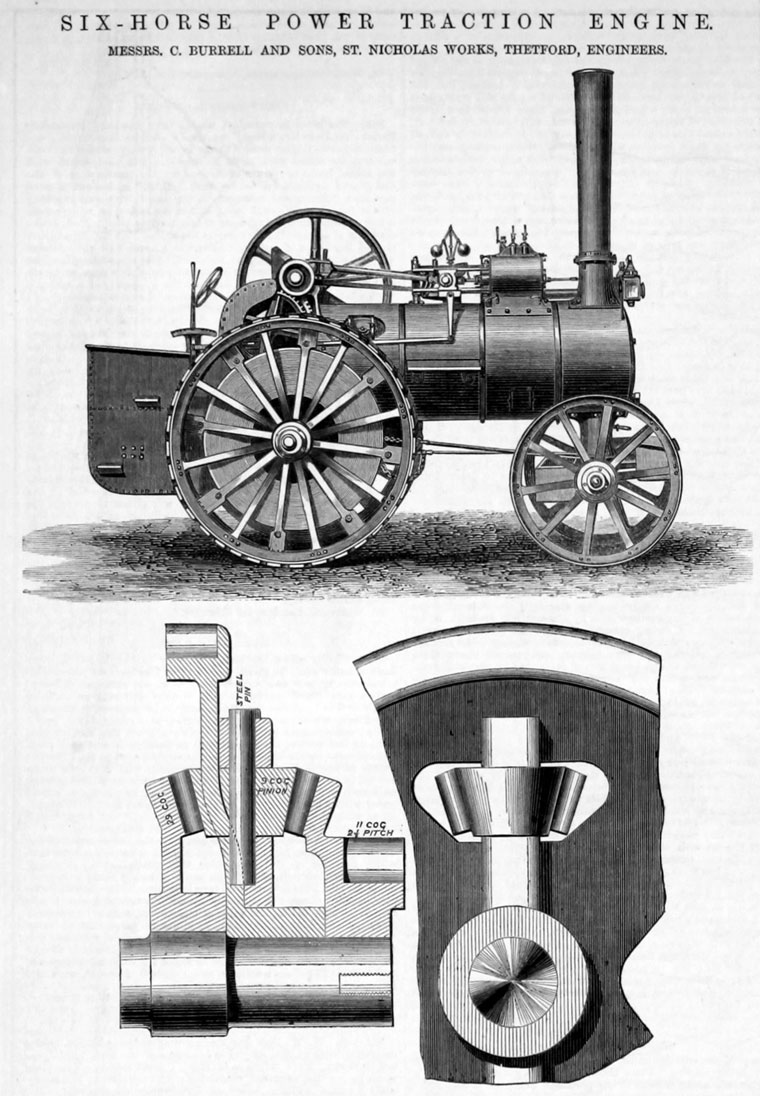 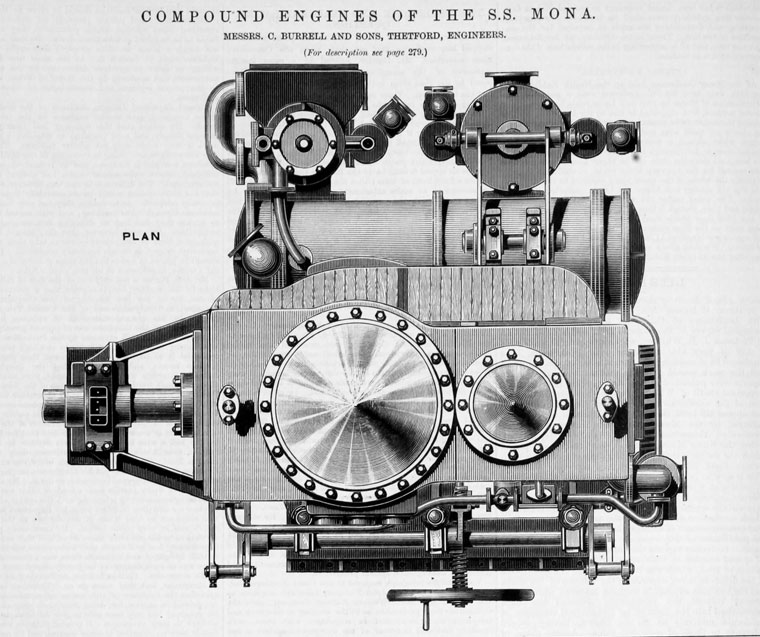 1885.Compound Engines of the SS Mona.

1885.Transporting a Marine Boiler by Road. 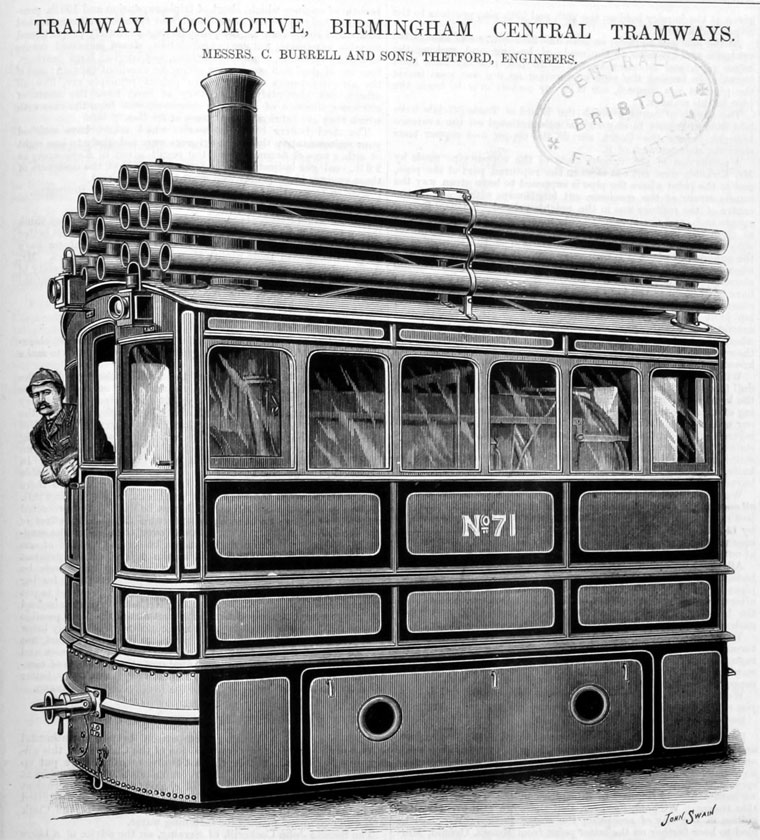 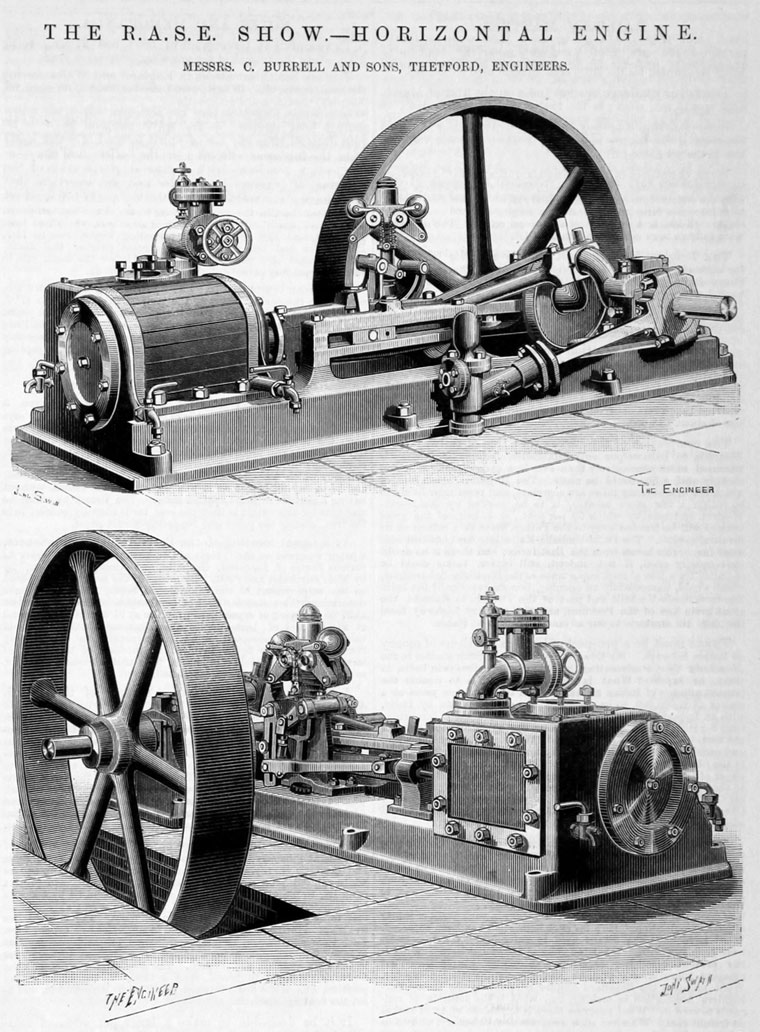 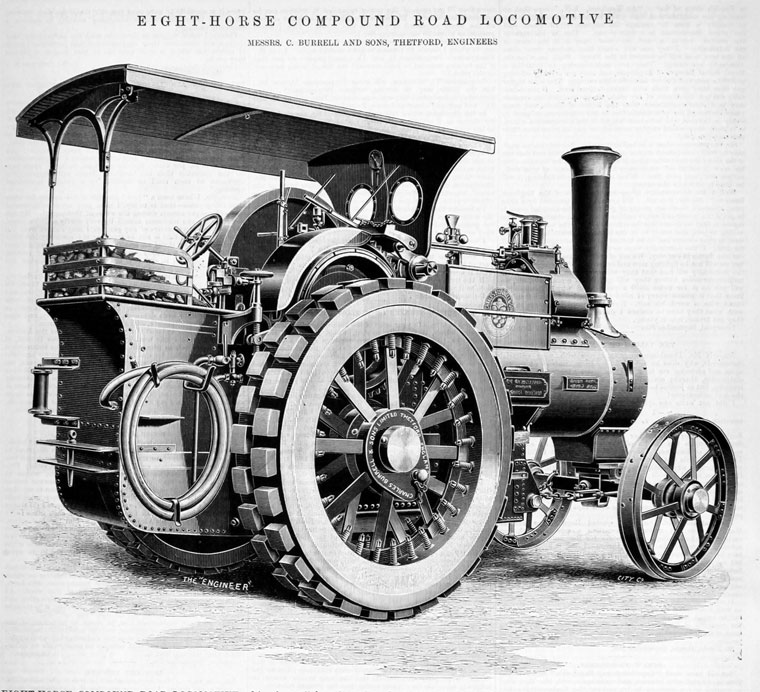 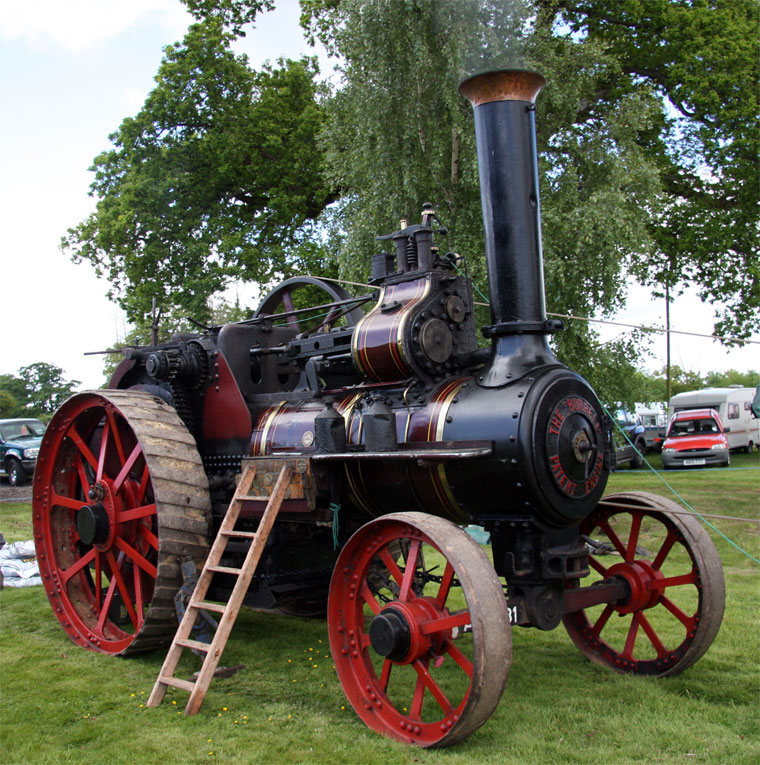 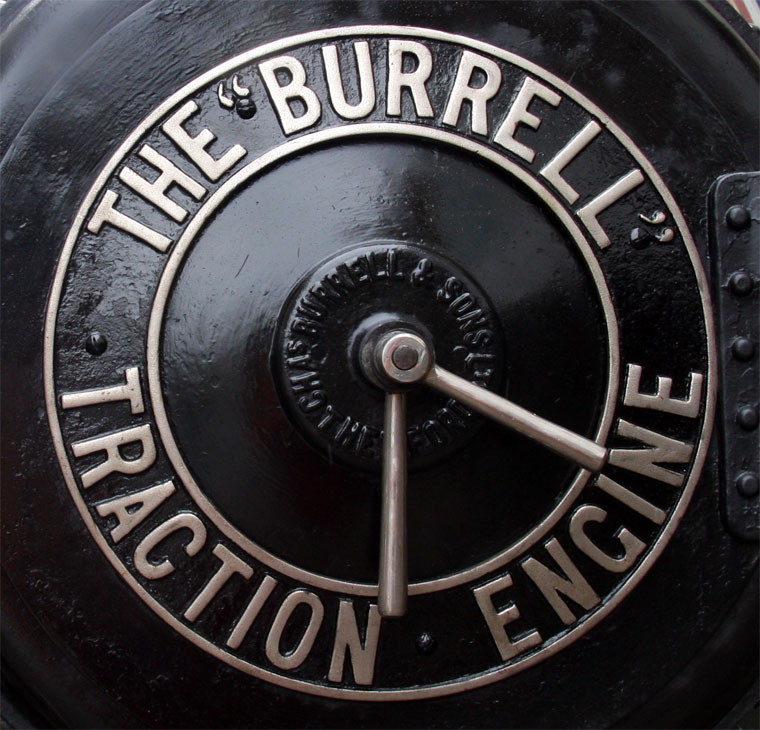 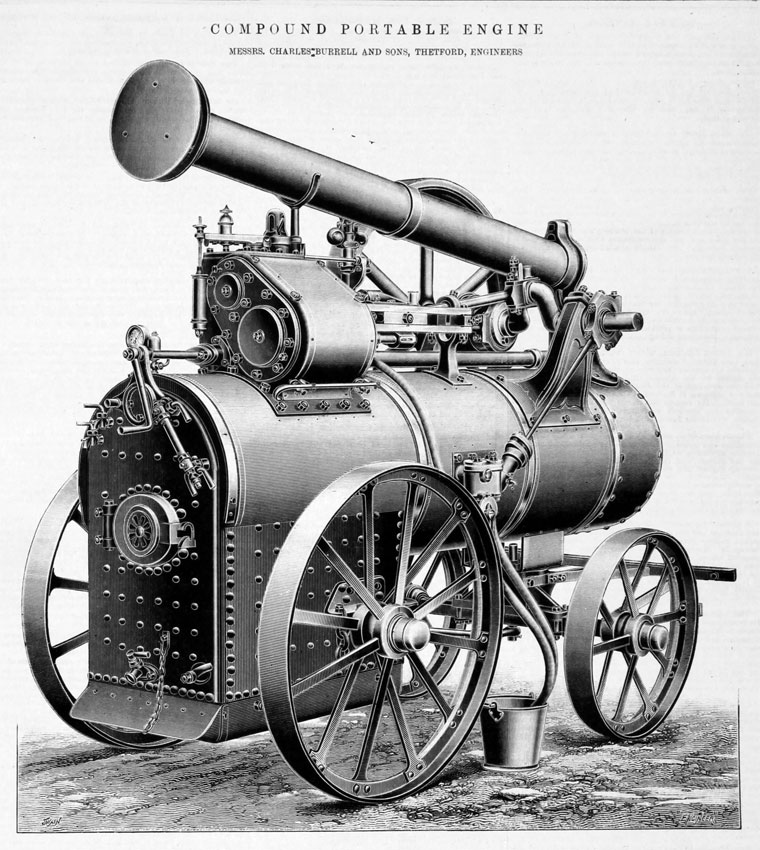 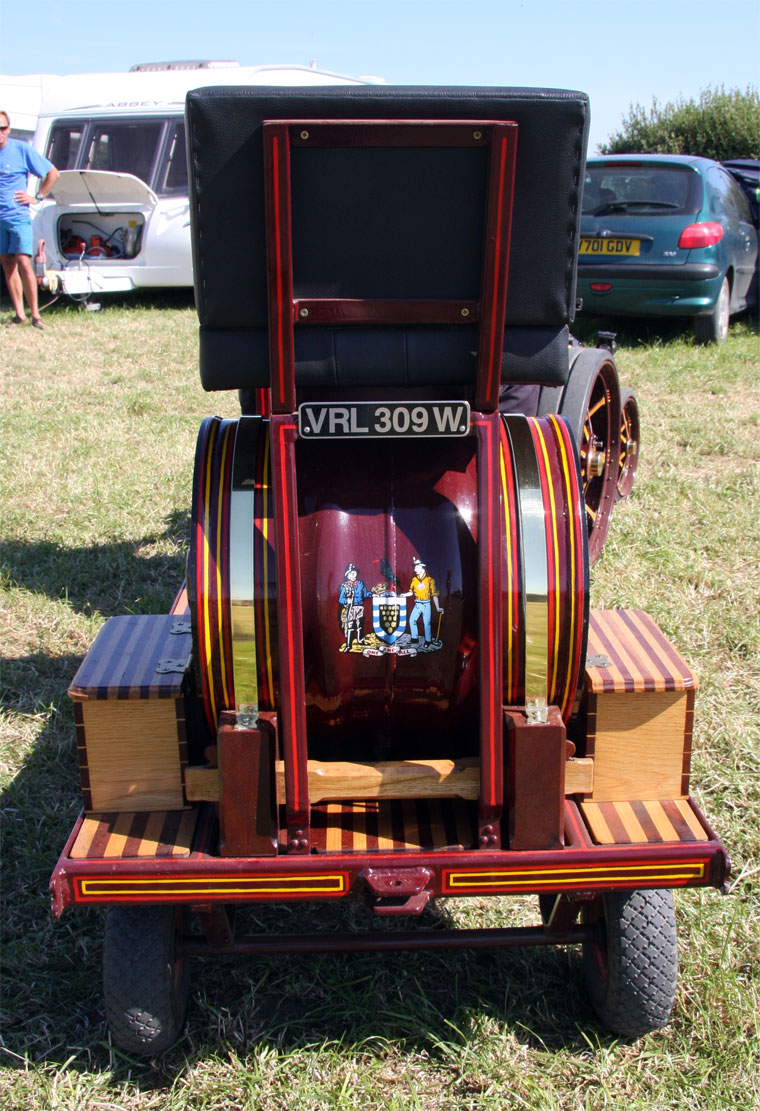 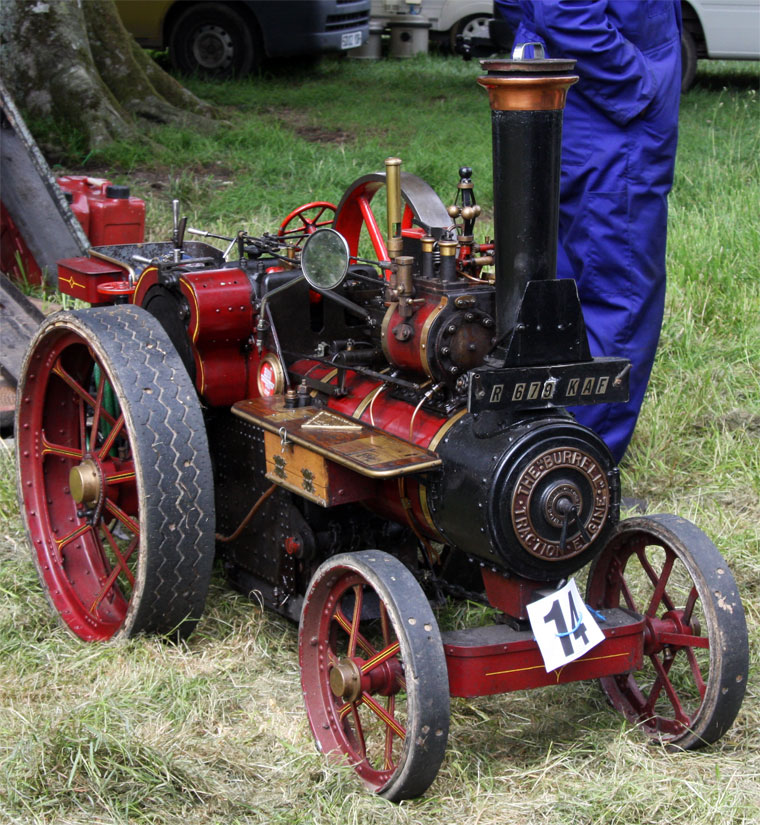 Charles Burrell and Sons of St. Nicholas Works, Thetford were producers of Traction Engines, Rollers and Showman's Engines. 329 are known to be preserved.

Some of the St. Nicholas Works buildings, in the centre of Thetford, have been preserved, including the former paint shop, which now houses the Charles Burrell Museum

1793 The company of Charles Burrell and Sons is generally regarded as being founded by Joseph Burrell (1759-1831), who in 1793 took over the whitesmith’s and blacksmith’s business of his father Benjamin (1725-1793). In partnership with his brothers William (1766-1832) and James (1770-1837), he turned the firm into a small engineering business. From repairing agricultural implements, they moved to making them.

1803 They first attracted notice at the annual Holkham Sheep Shearing they exhibited a seed and manure drill of James’s own design.

1804 James filed a patent for an improved threshing machine.

1805 Showed a mowing machine at Holkham.

1832 James Burrell managed the business alone after his two brothers died, and on his death in 1837 control passed to his second son Charles Burrell (1817-1906), aged only 20. Charles turned what was a modest country engineering firm into one of the leading agricultural and steam engineers of the nineteenth century.

1846 Charles Burrell was one of the first firms to make portable steam engines.

In 1848 he produced the first that also dressed the grain. This type of combined threshing and dressing machine soon became the standard for all except the smallest machines.

In the 1850s Burrell concentrated his technical abilities on the development of self-moving steam engines. In particular he collaborated with James Boydell, patentee of an ‘endless railway’ mechanism. This consisted of a series of flat feet attached to the outside of the engine's wheels. They were hinged in such a way that as the wheel revolved each succeeding foot would lie flat in contact with the ground, thus spreading the weight of the engine. The idea was that this arrangement would be more efficient for road-haulage engines, enabling them to deal with poor road surfaces and in 1855 Burrell became the licensed manufacturer of Boydell engines.

From 1856 to 1862 they made several types of Boydell engines for use on the roads and for ploughing by direct traction. Boydell engines proved to be unsuccessful, both technically and commercially, and Burrell turned instead to the development of conventional wheeled traction engines. In this he had considerable achievements, and his firm came to be known mainly for its traction engines and road locomotives.

1870s He worked with Robert William Thomson in the production of his road steamers, steam tractors designed to haul passenger and goods vehicles on the roads.

1882 A Portable Engine, designed by Frederick Burrell was exhibited at 1882 Royal Agricultural Show, for full description see The Engineer 1882/07/14 Page 19.

1884 The business was incorporated as Charles Burrell and Sons Ltd. Charles Burrell was chairman, although by now he was not so actively engaged in day-to-day management. Under his leadership the firm grew from one employing about 200 in 1870 to 400 in 1913, comfortably the largest employer in Thetford. The firm established a good reputation for its traction engines and steam road locomotives, especially with travelling showmen. It also entered electrical engineering.

1886 Made steam tram engines which went to Birmingham and Bradford.

1889 Horizontal engine shown at the RASE show at Windsor. And a compound digging engine and other engines. [5]

In 1904 Charles Burrell retired completely, and was succeeded as chairman of the company by his eldest son Charles Burrell (1847-1929), one of three sons who entered actively into the business in the 1870s.

1907 Won the Gold Medal in the RAC Trials for a five-ton steam motor tractor.

1919 After the First World War the business was taken into the AGE - Agricultural and General Engineers combine, at which point Charles Burrell retired as chairman.

1920 Showed a steam road locomotive at the Darlington Agricultural Show. [11]

1928 The goodwill, drawings and patterns were transferred to Richard Garrett and Sons.