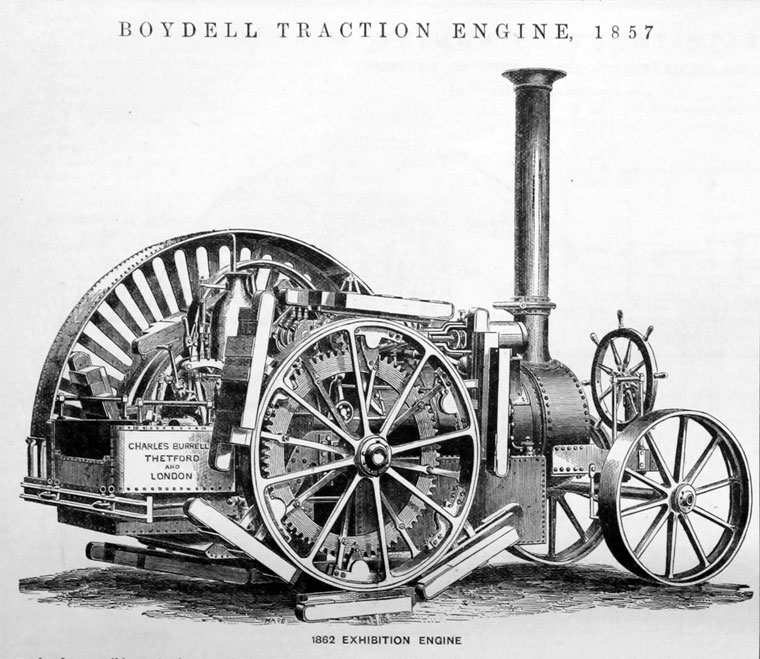 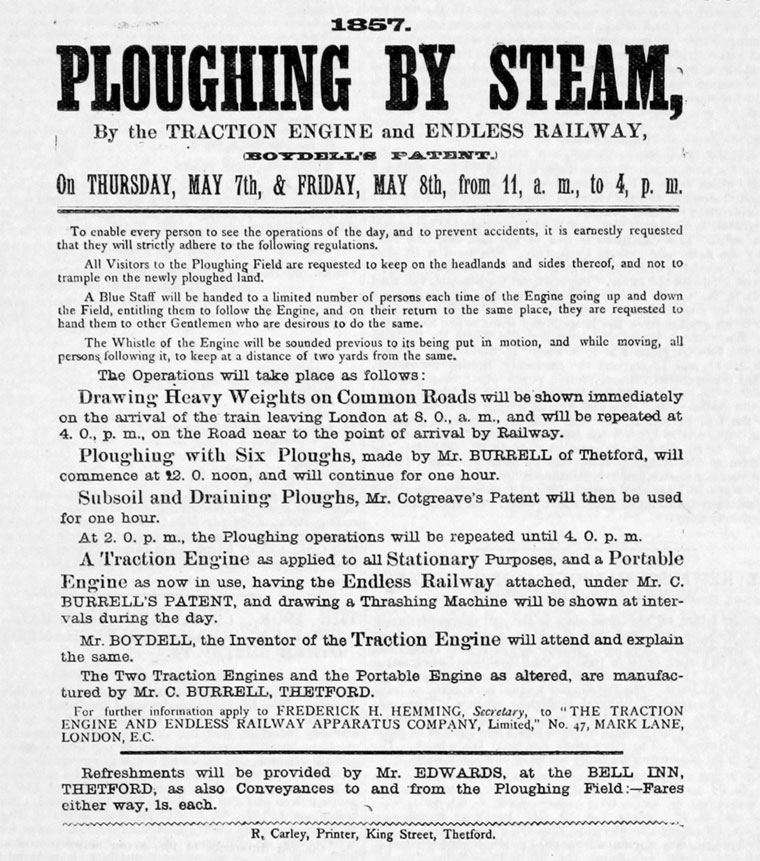 James Boydell (c1902-1859), Inventor of the endless track. Sometimes referred to as James Boydell, Junior. Of Oak Farm Ironworks and later of Boydell and Glasier

c1802 Born the son of James Boydell, of the Rosset, Denbigh

James Boydell was an industrialist and prolific patentee. He was the managing partner in the important Oak Farm Ironworks. This suffered a spectacular collapse in the 1848 depression. Before that he had managed estates in Flintshire, including that of Sir Stephen Glynne (who became one of the founding partners of the Oak Farm Company).

He is best remembered for his patented 'endless railway' system, applicable to traction engines and trailers. A number of flat feet were attached to the outside of a traction engine's wheels. They were hinged in such a way that as the wheel revolved each succeeding foot would lie flat in contact with the ground, thus spreading the weight of the engine, and allowing the wheels to roll on the plates. The idea was that this arrangement would be more efficient for road-haulage engines, enabling them to deal with poor road surfaces.

1827 December 23rd. Married at Plas-Teg, Hope, Flintshire, Wales, to Anna Maria Trevor-Roper (1804–1879).'On the 20th inst. at Hope, by the Rev. George Warrington, James Boydell, Jun. Esq. second son of James Boydell, Esq. of the Rossett, to Anna Maria, second daughter of C. B. Trevor Roper, Esq. of Plas-teg.'[1] 'Marriage of James Boydell, Jun., Esq. Great public rejoicings took place on the celebration of this gentleman's marriage to the amiable and accomplished Miss Trevor Roper. At the Rossett, two sheep were roasted on the green, of which the villagers partook, together with a quantity of 'cwrw da'. The entrance gate to Mr. Boydell's residence was tastefully decorated with ribbons and laurel, and in the evening about twenty of Mr. John Boydell's workmen were entertained with a supper and plenty of that soul-reviving liquor John Barleycorn. The village musicians increased the hilarity of the evening by playing "Come, haste to the wedding," and other tunes. The great respect entertained for Mr. Boydell and his worthy family was very strongly evinced in the joy of his poorer neighbours, as also by those of Llay, Hawarden, Hope, and other places.'[2]

Probate to his widow Anna Maria.

Charles Burrell and Sons became the most prominent licensed manufacturer of Boydell engines. From 1856 to 1862 Burrell made several types for use on the roads and for ploughing by direct traction. Boydell engines met an important need, but proved to be unsuccessful, both technically and commercially. The principle was revived by Mr Frank Bottrill in Australia, using more durable means of attaching the feet to the wheels.

1835 'The King's Ferry on the Dee — We are authorised by his worship the Mayor, to state, that the corporation of Liverpool have from the commencement taken a deep interest the completion of the King's Ferry, according the ingenious and admirably adapted plans of Mr. James Boydell. jun. The corporation at an early stage of the undertaking, and at the request Lord Mostyn, sent their surveyor, who reported of it in the most favorable terms, and in consequence of this they rendered all the aid in their power to carry the bill through parliament. The ferry is, indeed, by means of Mr. Boydell’s apparatus, one of the greatest improvements in this part of the country, and reflects the highest credit on the inventor of submarine endless chains. The contrivance, we venture to say, is the simplest, the safest, the most expeditious, and the most effective that ever was constructed or applied to rapid rivers.— Liverpool Standard'. [5]

1837 ' An Important Invention.— Mr. Boydell, of Dee Cottage, near Chester, has invented a locomotive engine, which, when fixed to heavy waggons, &c, will propel them on common roads at a very rapid rate. It was exhibited on Tuesday, and elicited the strongest approbation from many scientific and practical men, who witnessed the trial, and minutely examined the machinery. It is applicable to ploughs, which it propels with great ease and velocity. Chester Courant. [It would be well if the public were informed upon what principle the machine referred to constructed.]'[6]

1839 'JAMES BOYDELL, Jun., of Dee Cottage, [Queensferry] near Hawarden, begs to inform the public, that he has obtained her Majesty's Letter Patent for an improvement in the method of propelling carriages, by which he believes the difficulties at present experienced in drawing heavy loads up inclined planes will be overcome, and hopes may lead to the adoption of rails on most roads at present constituted. His improvement consists, instead working a carriage forward by the wheels, in forcing it on by a series of levers radiating from the ground, worked on rotatory cranks, the angle which form with the ground being such that pressure them is downward, and each lever, after performing its work, is taken up, the distance it propels the carriage being in proportion to its length, as it depends upon the size of the segment of circle it describes, when forced on by the crank. It follows, that whenever rotatory cranks are set in motion the carriage must go forward, whether on the level or up hill - the wheels of the carriage cannot turn round on their own axis, and levers acted upon by multiplying power may be made to pull forward the heaviest weights. J. Boydell has had the plan in practical operation by manual power, and that gentlemen interested in locomotion may have an opportunity of forming their own judgment, invites those of the public who will take the trouble to attend the King's Ferry on Wednesday the 4th of September, when he will be prepared to show the plan in operation.'[7]

1840 'Patent issued to James Boydell, junior, of Cheltenham, for improvements in the working railway and other carriages, in order to stop them ; and also to prevent their running off the rails.'[8]

1843 'Patent Sealed 11th February.— James Boydell, jun., of Oak Farm Iron Works, near Dudley, ironmaster, for improvements in apparatus for retaining the wheels of carriages, in the event an axis breaking, or otherwise.'[9]

1846 'English Steel — We understand Mr. Boydell, of the Oak Farm Iron Works, near Dudley, has recently perfected some valuable improvements, whereby he is enabled to manufacture articles of English steel, equal in quality to the finest of Foreign production. Mr. Boydell, besides other matters, is now engaged completing an extensive order of swords for the English Government.— Birmingham Advertiser.' [11]

In His Own Words

'I have been managing partner since the commencement of these works. The mining part was established 14 or 15 years ago ; seven years ago we began to make iron.

'When in full work our workmen amount to 1200, from 300 to 400 being miners, and the rest engaged in the manufacture of iron and also of machinery, - ours being one of the most complete works, comprising so many branches united.

'Even at the present time we are overdone with orders for iron, though at reduced prices, from a better quality, and also from having different patents, one for keel-plates to vessels. Half of them buy their metal ; we get ours on the spot.

'In the month of August last our men professed to be turned out by others.

'A great Methodist talker amongst Mr. Foster’s men, with whom I often had a conversation on passing his house, believed that the French were coming over to give them assistance, and I believe that was a very general impression amongst the men.'

He continues at length, giving a good insight into the lot of the local workers, and into the methods of working, including the activities of charter-masters, butties, truck shops, etc. He comes across as someone who wanted his workers to be treated fairly.

Drawing on his experience with workers in both agricultural and industrial areas, he says '…. I may refer to Gornal, through which I pass six times a day, to and from the works to my own house. It is, I should imagine, the dirtiest and most uncivilised village in the world; and yet the people have the best hearts ; I can do anything with them. The people are mostly nailers, and some miners. The nailers are a very rough set……'

'An American View of Mr. Boydell and His Traction Engine. —James Boydell, the inventor the steam traction engine, and one of the greatest mechanical worthies of the age, died about three weeks since of decline, brought on by cold caught through exposure on Woolwich marshes, while waiting for the officials to test his engine. He was a man of giant frame, simple and noble disposition, untiring industry, and great genius. He was murdered in the prime life by routine. Government officials hate all inventors. They accordingly made him wait for hours in the wind and rain while tantalising him with experiments withheld. The fate of this man, working like Archimedes, in the very antechamber of death, feebly attempting to busy himself with his models of new inventions - one, believe, of immense value in the construction of locomotives—affected me much. For years be had laboured, and on the verge of fame, with success in his grasp—for his traction engine is at length approved—he dies a victim of the system by which the entrance to the government departments in this country is strewn with the bones of inventors and carpeted with their skins. For one Armstrong there are a hundred Boydells. Would that a mammoth traction engine might plough the site of Admiralty and Horse Guards, and the dwellings of tbe red tape flunkeys who strangle the birth of great things! New York Times.' [14]