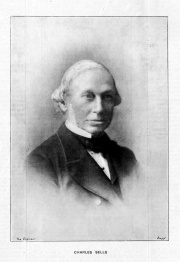 Worked for Maudslay, Sons and Field.

"...of the pioneer engineers of the nineteenth century. His death will be regretted by a very large circle of friends and acquaintances.

In 1837 he entered the establishment of Messrs. Maudslay, Sons and Field as a pupil, and steadily rose in the estimation of the partners, who were not slow to recognise talent. In 1847 he became head of the drawing office, and for many years he had sole charge of the designing department of the works.

During all this time the firm were in the very zenith of their fame. The list of the work for the designing of which Mr. Sells was responsible would fill columns of The Engineer. He was the the inventor of the return piston-rod horizontal marine engine, which might be regarded as the reply of the Lambeth firm to the trunk engine of Penn. Indeed, much of the best marine work of to-day is but a replica of his designs. Nothing in the way of work came amiss to Charles Sells. He designed and saw constructed dredgers for the Swan River, Naples, the Danish Government, Copenhagen, Calcutta, Pernambuco, Adelaide, and Amsterdam among a multitude. He designed the machinery for the mints of Constantinople, Bombay, Bogota, Columbia, China, London, and many other places. He designed, it is probable, more marine engines for the Governments o Great Britain and other nations than any other man who has ever lived, and a special feature about his designs and Maudslay's work was that there were never any failure!

About 1861 he took out his patent for reversing by gearing, a very beautiful invention, which was fitted to several ships, among others the Roma and Venitia, of the Italian navy. A notice of this gear will be found in THE ENGINEER, page 574, for June 17th,1898. Mr. Sells was far from being wedded to old-world methods. On the contrary, he was always ready to move with the most advanced men, but he was never rash, and this was one reason why he was so successful."