At low tide the 'starlings' or cutwaters are visible 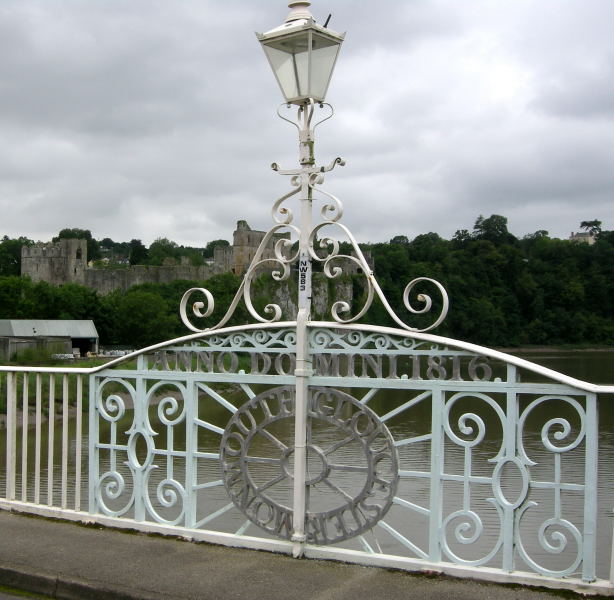 The following notes were prepared for Grace's Guide by John W. Burrows:

Chepstow Bridge (also known locally as the Old Wye Bridge) is a Grade 1 Listed Structure and is the world’s largest surviving iron arch road bridge built before 1830 - during the first 50 years of iron construction in world history (1780-1830). It is a piece of world heritage and has the distinction of involving three of the greatest engineers of the day - Rastrick, Rennie, and Telford.

Chepstow Bridge was designed and built by John Urpeth Rastrick of Bridgnorth in Shropshire - one of the early railway engineers who later: chaired the judging panel for the famous Rainhill Trials for steam engines; built the first steam engine to run in the USA; and built the London to Brighton Railway in 1841 including the Grade II Listed 37 brick arch Ouse Valley viaduct at Balcombe in Sussex.

When Chepstow Bridge opened on 24th July 1816 it was the world’s third largest iron arch road bridge but it was overshadowed then, and ever-since, by the opening two months earlier of the world’s largest iron arch road bridge, the first Vauxhall Bridge in London. Chepstow Bridge was further overshadowed by the advent only 5 years later of large suspension bridges in the UK and Europe.

Of the 10 largest iron arch road bridges built in the world before 1830, including the old Vauxhall Bridge, all have been demolished except for Chepstow Bridge.

Not only is Chepstow Bridge the largest surviving iron arch road bridge from that time but it is an extremely elegant bridge, one of the finest examples of Georgian/Regency bridges and it is the only 5 arch iron road bridge of that time to survive. The bridge has a light latticework appearance with arches of an iron grid pattern similar in style, and construction, to that used by Telford and Stanton for smaller bridges in Shropshire from 1811 onwards.

For 500 years the old 10 arch wooden bridge on narrow 12.8m (42ft) wooden piers carried the road from England into Wales at the lowest bridging point on the River Wye but the bridge required constant repair. In 1810 the local magistrates for Gloucestershire and Monmouthshire decided on an iron arch bridge with stone piers, which at that time would have been the world’s second largest iron arch road bridge so it was a very bold initiative for its time.

The stone piers for Chepstow Bridge have had to withstand the force of the highest daily tidal range faced by any bridge anywhere in the world (until the Severn Bridge was built in 1966). There are strong currents from the river and the tides. The flow between the bridge piers changes direction 4 times a day and the tide can rise up to 13.5 metres (44ft) in 4 hours. In 1811 the local magistrates asked Watkin George, iron master of what was then the world’s largest ironworks, the Cyfarthfa works at Merthyr, South Wales, 50 miles away, to design a 7 arch iron bridge and in July 1811 Watkin George produced a plan.

In 1810 John Rennie (the elder) was invited in September 1811 to produce a report on the condition of the old wooden bridge and proposals for its replacement. Rennie, designer of Waterloo Bridge, London and later Southwark and London Bridges, produced two plans late in 1811 which were presented in his absence to the magistrates in January 1812. One was a 7 arch iron bridge using stone piers in place of the existing wooden piers and retaining the obstructive central stone pier. It was similar to Watkin George’s plan but of sleeker appearance. The cost of this bridge would be £15,191.

Rennie’s second design was for a completely new bridge of two side stone arches and a central iron arch of 76.2m (250ft), but at a cost of £41,890. At the time Rennie was negotiating a £200,000 contract for Regent/Vauxhall Bridge, which he subsequently lost, so he would not have thought £41,890 too expensive, but the local magistrates did. If Rennie’s iron arch had been built at Chepstow in 1812 it would have been the world’s longest cast iron span (and it still would be today) and it would have been the longest span of any kind ever built - although by 1813 it would have been surpassed substantially by Wernwag’s single wooden arch ‘Colossus’ of 103.6m at Philadelphia.

No action was taken in 1812 until an accident under the wooden bridge in September 1812 cost the lives of 6 ladies and a boatman from Monkton Coombe near Bath on a River Wye cruise returning from Tintern Abbey, popular at the time. In 1813 Rennie’s low cost 7 arch design was put out to tender and in February 1814 John Urpeth Rastrick, managing partner of (John) Hazeldine and Rastrick iron foundry at Bridgnorth, Shropshire won the contract.

Rastrick completely redesigned Chepstow Bridge in March 1814 and the bridge we see today is that bridge. The new build cost of Rastrick’s bridge was £17,850, substantially less than Rennie’s iron arch but more than Rennie’s 7 arch design. However, Rastrick’s design removed the obstructive central pier and inserted a wide central arch which facilitated river navigation. The design was not only ‘not Rennie’s’ but was in the style of the other great bridge engineer of the day, Thomas Telford.

The overall shape of the bridge conforms to Telford’s advice on bridge design in his 1812 article in the Edinburgh Encyclopedia, and its arches are similar in style and form to Telford and Stanton’s small prototype bridge at Meole Brace, Shropshire of 1811. Rastrick lost out to William Hazeldine for the ironwork contract for Meole Brace so he knew the design of the bridge in detail and this may well have influenced his approach to the style and structure he used for each of the 5 arches at Chepstow.

On 4th June 1814 Rastrick signed a contract with the local magistrates and in April 1815 began the demolition of the old wooden bridge and the central stone pier. Between 13 April 1815 and 27 September 1815 he built the 4 new stone piers. From October 1815 onwards to March 1816 constructed the 5 iron arches. The ribs of the centre arch were in place by the end of January 1816. The iron arches were cast at his foundry in Bridgnorth, Shropshire and brought down the River Severn and up the River Wye to Chepstow by boat. Chepstow Bridge was opened with great ceremony on 24th July 1816 and has remained open since.

At various times the 'starlings' (cutwaters) and the iron structure have had strengthening work carried out - most recently in 1980, and essential repairs and re-painting in 2015.

The bridge remained a principal crossing between England and Wales for 150 years carrying the A48 trunk road from Gloucester to Cardiff, and the England and Wales traffic from and to the Beachley - Aust Ferry prior to the Severn Bridge opening on 8th September 1966, 150 years and one month after Chepstow Bridge opened. In 1988 a new concrete bridge was built next to the site of Brunel’s railway bridge to carry the A48 into Wales leaving Chepstow Bridge to carry local light traffic with vehicles up to 7.5 tons in single line traffic controlled by traffic lights at either end.

Today, Chepstow Bridge (1816) is the world’s largest iron arch road bridge remaining from the first 50 years of iron construction (1780-1830) and an outstanding example of late Georgian/mid Regency bridge design, construction, and resilience - and its designer and builder, John Urpeth Rastrick, one of the most important engineers of his generation - one of the great names in the early development of the world’s railways.

A useful summary has been prepared by J Burrows showing Chepstow Bridge's place in relation to other large iron arch bridges built up to 1830. It is available here:-

1814 Advert: 'To Inspectors of Bridges,
Wanted immediately a a Person properly qualified as a RESIDENT INSPECTOR, to superintend the Execution of the Masonry and Iron-work in Re-building CHEPSTOW BRIDGE, agreeable to Messrs. Rastrick and Co.’s Plans and Specifications. Persons desirous of engaging in such an undertaking, are requested to send a Reference as to their ability to Mr. Evans, Solicitor, Chepstow.'[1]

1815 'On the 27th ult. was completed the last of the piers of Chepstow Bridge. The laying of the foundation commenced on Monday the 14th of August. Its dimensions are 42 feet in length, 17 in width, and 30 feet in height; and it has been built in the short space of 44 days. Whether we view the materials used, the exquisite workmanship, or the ingenious methods which have been employed in the arduous undertaking, all unite in reflecting the greatest credit Mr. J. W. Rastrick, the engineer.'[2]

1816 'All the ribs of the middle arch of Chepstow bridge are now up, forming a span of a hundred and twelve feet. Thus the most difficult and dangerous part of this arduous undertaking having been surmounted, the work will henceforth very rapidly advance, unless injured by some occurrence.'[3]