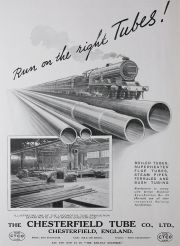 1902 The company took over the Universal Weldless Steel Tube Co, with its rights in the 'Ehrhardt' processes for manufacturing solid-drawn tubes in the United Kingdom[1].

1906 It became the Chesterfield Tube Co and remained so for 60 years, but was always known locally as 'The Tube Works'. The company was registered on 4 December, to acquire the patent rights for the United Kingdom, India, Egypt, and all British Colonies and possessions, except Canada, for the manufacture of weldless steel and other hard metal tubes by the 'McTear' process[2].

The original 'Universal Works' on the Derby Road site produced the weldless steel tubes by piercing steel billets at high temperatures and then 'drawing' the steel to the desired dimensions of the tubes. Incredibly that same process is still being used 100 years later, although the original end-product of boiler tubes has long since been succeeded by seamless steel high pressure gas cylinders, making Chesterfield the home of the leading gas cylinder company in the world.

The ability to make top quality seamless steel tubular products that could withstand high internal pressures meant that the company was well placed to produce many items for use in the First World War, and the range and size of products increased dramatically during the early years of the century.

1929 It was taken over by the Tube Investments Group. The Company joined the group of which it was to be a member for nearly 60 years, and during the next decade much research and development work was carried out.

1932/33 The world`s first commercial extrusion press was installed for the manufacture of stainless steel tubes up to 5” in diameter, and once again the men and women of Chesterfield were able to contribute significantly to another war-effort as the national re-armament programme began.

1936 A much more important and successful project was the creation of the Heavy Tube Department in 1936/38. The plant handled steel billets up to 20 tons in weight and was officially opened by Lord Stanhope, the First Lord of The Admiralty in December 1938. It had an output of 1,600 tons a month.

1939 From the commencement of the Second World War, production at the Tube Works went on 24 hours a day, seven days a week. Factory windows were covered by corrugated sheet metal, the whole plant was camouflaged with brown and green paint to blend with the surrounding countryside and a strict blackout was observed. The company was responsible for the defence of the factory and a platoon consisting entirely of employees was formed and attached to the 6th Battalion Home Guard, and the total number of employees increased to over 3,000, and included 750 women.

The Air Ministry ordered production of cylinders for a balloon barrage and the company produced 1,200 hydrogen cylinders a week, so that towards the end of 1939 the balloon barrage defence system was put into operation all around Great Britain.

Throughout the war, the company produced a whole range of cylinders for all three services, including a million oxygen breathing cylinders for aircraft crew and submarines, over 6000 torpedo bodies and submarine firing reservoirs and many thousands of 14” and 15” naval shell casings. Other uses included fire-fighting equipment, rescue-dinghy inflation equipment, oxy-acetylene welding repair work, and shipbuilding.

1940 The Small Tubes Department (STD) came into being as a 'shadow factory', built under the Government's 'dispersal scheme', and produced small tubes up to 4-inch diameter of high quality alloy steel. With only minor alterations to existing machinery the STD began producing bomb and shell casings. Over 147,000 were supplied by the end of the war, and 12 million feet of small bore tubing was supplied from this workshop for aircraft construction alone. The STD also produced 400,000 outer casings for sten guns, 12,000 mortar barrels, and over 20,000 gun barrels. (Once again the production of cylinders inaugurated by 'the father of the company', Joe Trevorrow, back in 1906, proved invaluable to another war effort - although even before war broke out in 1939 the company had already produced its first million cylinders).

In the 60+ years since the WWII had ended, Chesterfield Tube Works have gone from strength to strength, winning the Queens Award for Export Achievement in 1976 and again in 1982. Now known as U.E.F. Chesterfield Cylinders, the Tube Works has been a major local employer for over a century, and has become part of the history of Chesterfield. (06/08)