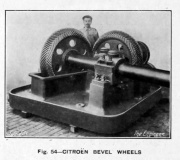 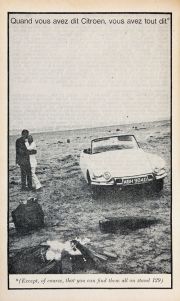 Whilst visiting Polish relatives, André-Gustave Citroën saw a distinctive set of chevron-toothed helical gears. He acquired the patent for these gears; the shape of the teeth on these gears is said to have inspired the double chevron logo of the Citroen company.

c.1901 Citroën set up a business in Paris making gears.

1914 With the outbreak of war, Citroën offered to increase output of shells; his factories produced more than 50 000 shells per day.

1919 André-Gustave Citroën founded the Citroën automobile company; he started making cars in his Javel factory which had been established in wartime to make armaments.[1]

He introduced hitherto unknown (in Europe) mass production techniques borrowed from Henry Ford and within a year was manufacturing 100 cars per day.

1920s Also made crawler tractor and produced the half-track Citroen-Kegresse. Also made the Somua rotary cultivator and the Amoit mechanised plough

1934 After completely rebuilding the Paris factory, the company was in financial trouble and Citroën's biggest creditor, Michelin, at the request of the French government, acquired control. André Citroën was removed from the post of Chairman and was replaced by Pierre Michelin who was in turn was replaced by Pierre Boulanger in 1938.

WWII The outbreak of war meant that officially all research and development ceased; in reality it continued and the fruits were displayed in 1948 with the presentation of the 2CV.

Post WWII: production of cars was slow to re-start because the view of government restrictions.

1950 Pierre Boulanger was killed at the wheel of an experimental Traction and Robert Puisseux became Président-Directeur Général of Michelin and Chairman of Citroën.

1955 Introduction of the revolutionary DS. Citroën and Panhard entered into an agreement to partially merge their sales networks.

1960s the company launched the Ami 6, built a new, state of the art factory in Rennes in Brittany and acquired a majority share holding in truck-makers Berliet. The company also entered into agreements with NSU to build Wankel rotary engines and with Peugeot although the latter arrangement fell apart when Peugeot entered into an agreement with arch rivals Renault in 1964.

Agreement with Fiat (forming a new holding company, PARDEVI owned 51% by Michelin and 49% by Fiat); Citroën dealers sold the Autobianchi range in France and Belgium and Citroëns were sold via the Fiat network in Italy.

1968 the company was re-organised with the setting up of a parent company called Citroën SA to oversee the activities of Citroën, Panhard and Berliet.

Another new factory was built at Aulnay-sous-Bois. Introduction of the SM and GS cars.