Grace's Guide is the leading source of historical information on industry and manufacturing in Britain. This web publication contains 143,031 pages of information and 229,415 images on early companies, their products and the people who designed and built them. 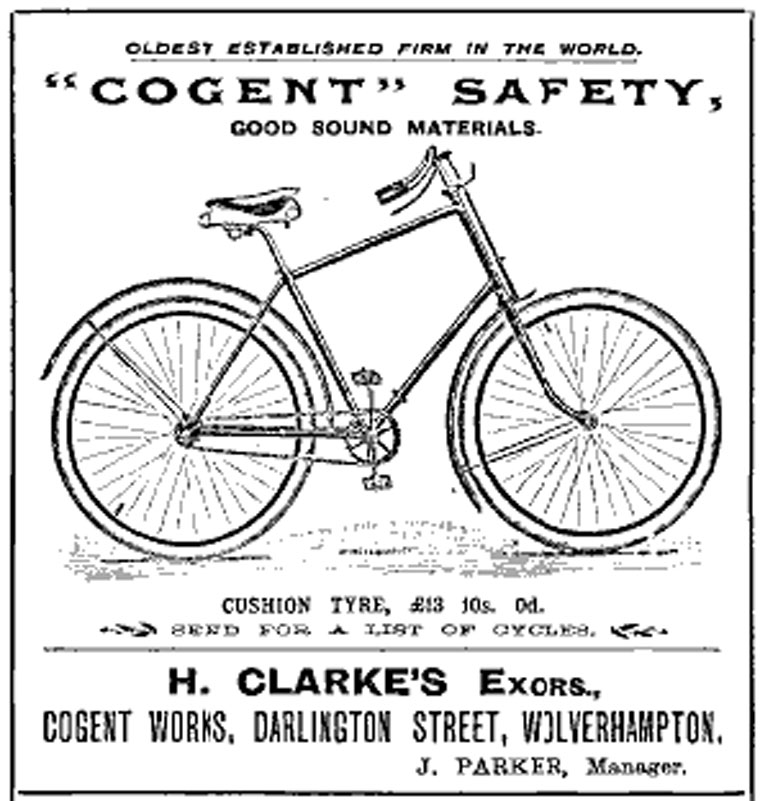 1860s Henry Stephen Clarke saw wooden-wheeled velocipedes in Paris. Being a wheelwright, he set up the Temple Street Wheel Co in Wolverhampton to make wooden wheels for export to France.

1868 Clarke founded the Cogent Cycle Co in Darlington Street. Over time he was joined in the business by his five sons: Thomas Clarke, George E. Clarke, William Clarke, John Clarke, and Henry Clarke.

He helped his friend Daniel Rudge to build racing cycles at 19 Church Street, Wolverhampton, which included an improved form of wheel bearing.[1].

By 1877 'Cogent Penny Farthings' were selling at prices from £8 to £10 and the company was producing many different models. Hubs were made in two halves; when built-up these secured the spokes; also used rounded case-hardened cone bearings to reduce friction.

1887 The 'Cogent' No.20 sold for £15.10s.0d. It had ball bearings, a large front wheel to reduce vibration, and a hollow steel frame, part plated with an enamel finish.

1889 Henry Stephen Clarke died at the age of 52; Joseph Parker (2) took over the business on behalf of the executors. Tom Clarke moved to Manchester, where he set up the Express Cycle Co. George, William, Jack and Henry went on to form a new company, the Wearwell Cycle Co, in new premises a little further down Darlington Street. William was Managing Director of the new company which soon became one of the most important cycle manufacturers in the town.

1896 Demand for these machines increased considerably

c.1900 (?) Eventually the business was liquidated.