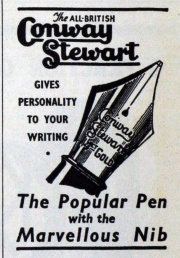 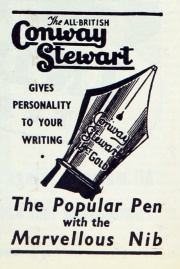 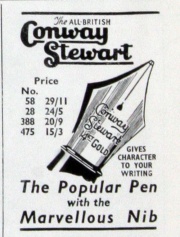 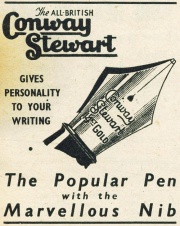 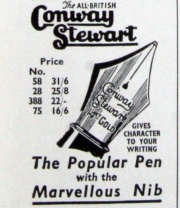 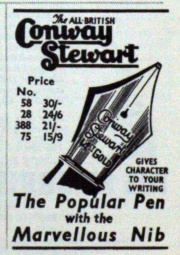 1905 Frank Jarvis and Thomas Garner formed Conway Stewart and Co Limited at 13 Paternoster Row London EC1, next to St Paul's Cathedral in London. Jarvis and Garner had a single aim, to produce elegant, timelessly beautiful, yet functional writing instruments - a principle that Conway Stewart holds true to this day. Although there is much debate regarding the origins of the Company's name, it is believed that the name "Conway Stewart" derives from a popular vaudeville act of the day: Conway and Stewart were supposedly a comedy double act who appeared at Collins Music Hall in Islington.

1905 The Company became one of the leading fountain pens sellers in England and improved and expanded its facilities numerous times as demand increased.

WWI. During the huge growth in letter writing during the First World War (1914 - 1918) pens played a significant part in those cherished letters that passed between soldiers at the front and loved ones at home.

1935 Conway Stewart listed its shares on the London Stock Exchange, and raised further capital for expansion and development.

WWII. The pens were also used throughout World War II (1939 -1945) by British Prime Minister Winston Churchill. The factory was bombed and slightly damaged during the Blitz and a significant portion of the factory converted to munitions manufacture, pens were still produced throughout this period in a limited range.

Post-WWII. Many other models appeared after the end of the war.

1960s The Company continued to produce, but the advent of cheap "biro" and ballpoint pens and mass production in lower cost countries, began to alter the market for quality fountain pens dramatically. The use of fountain pens, like mechanical watches, began to diminish, and this had a big impact on traditional producers.

1975 The Company stopped production, however, the trademarks, designs and archives were kept intact and interest in the Company, its pens and its history remained very high.

1976 Conway Stewart re-entered the quality pen market, supplying "gold nib" pens to Japan[5]. Following a significant investment in research and development, the company began to make a range of pens for those who appreciate traditional craftsmanship.